Give Away of 2 Books Signed by Film Maker, Alex Cox--of Sid & Nancy and Repo Man Fame 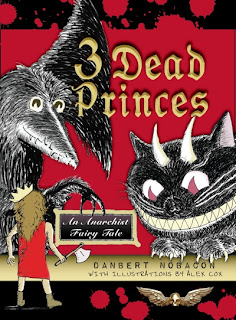 For anarchist friendly children and cult film fans of all ages.
Danbert Nobacon is a character, and we've devoted a lotta blog space to covering his first book, 3 Dead Princes and his new CD, Woebegon, since October.   We've posted an exclusive interview, covered The Devil's Ball at Martyr's with Nobacon as MC, and his ventriloquism with his little friend, Mr. Death.  If you'd like to see more, type Nobacon into the handy little search bar to the right of this post, just under recent Win A Disc Winners.   Here's some never before seen footage we shot at The Book Cellar, at Danbert's book release tour in October.

Like Ayun Halliday, our 1st interview on the Bodacious Book Blitz, Nobacon also has a fascinating publisher in Oregon.  She's at Exterminating Angel Press,   has the unconventional name, Tod, and is married to Alex Cox, The infamous director of Repo Man and Sid and Nancy among other cult classics.   In fact, this is the same Alex Cox that illustrated Danbert Nobacon's 1st book, an anarchist fairy tale with a decidedly unprincessy little girl protagonist who kicks butt.


Rumor is, Cox's illustrations of the heroine, Stormy resemble a slightly aged up version of Nobacon's own daughter, Stella, who is 10.   We're thrilled to offer 2 special copies signed by artist/ director Alex Cox himself!!


Here's a reprint of ChiIL Mama's review of 3 Dead Princes.


ChiIL Mama was sucked in and swept away by the anarchist fairy tale, 3 Dead Princes.   This book has Iggy Pop's seal of approval right on the cover.    He says, "It definitely  rocks!   I ought to know."   Jessica Mills, author of My Mother Wears Combat Boots, calls 3 Dead Princes, "An alternative fairy tale for anarchist/punk/fellow traveler parents to read with their kids!"
Our whole family enjoyed Princess Stormy's induction into The Order of The Accidental Adventurers and her first wild journey lead by a Fool.   Danbert Nobaconis witty, wicked, and wonderfully unconventional.    He gets extra bonus points because he doesn't dumb down the English language for readers.   His uniquely inventive vocabulary even resulted in a 6 page glossary of new words at the end of the fairy tale!
Nobacon's mythical creatures are imaginatively absurd, and the one off references to classics like Shakespeare, Alice in Wonderland and myths had me snorting aloud as I read to the kids.    We loved the giant cat with the "Lancashire smile" and the inclusion of Rosenstern and Guildenkrantz .
Nobacon has created a descriptive, post apocalyptic world that adults and children will relish exploring together.   Of course, Alex Cox's illustrations of great hairy beasties and freaky people add to the tale.
I was raving to another pierced, tattooed Mama friend about how much we were digging this book, while our kids hung from trapezes, ropes and silks in a great Circesteem aerial class.   She asked to borrow it and said what I thought was "These are art people."   I hastily agreed, "Yeah, art people and musicians."  What can I say, I was front row at Riot Fest the night before, shooting pixs of The Circle Jerks and Bad Religion, without earplugs, so my hearing was temporarily worse for the wear.   She laughed, enunciated and said "No, OUR people."   Yes, indeed.   Even more so.   This is THE fairy tale for OUR PEOPLE.
There are some off color remarks, a smattering of 4 letter words, 3 accidental murders, a newly menstruating tween protagonist, and a few paragraph long sentences that may leave you gasping for breath, if you are reading aloud.   However, if you're not particularly prudish, Nobacon's first novel is pretty appropriate for most kids elementary and up, and a fun read that hides a myriad of true gems of wisdom.   I was so jazzed to read "Tools over weapons, my dear girl," said the Bird.   Ideas over ideologies.   Like the wonderlook.   It helps us see things in new ways.   If we have the tools and the imagination to look at the world afresh, then we will never cease to be startled by what we find in it."   Truly words to live by!
Danbert Nobacon is better known as a singer, song writer and founding member of the     anarchist punk band, Chumbawumba.  The back cover proclaims he loves children and animals.   This is his first book.   Alex Cox is better known for his film making skills.   He loves monsters.


Nobacon's first novel continues his clever reeducation of the world in the true nature of the original anarchists.   He writes "There was an actual anarchist prince in old Russia, called Peter Kropotkin.   And contrary to the stereotyped image of the black-cloaked, bomb-throwing anarchist, Kropotkin was a rational, articulate thinker.   He developed a theory of the human tendency toward cooperation, or mutual aid as he called it, rooted not in wishful thinking, but in observable science."
ChiIL Mama recommends this funny fairy tale about girl power, peace, and the overarching value of a world view that celebrates cooperation, intelligence, curiosity, exploration, creativity, magic and diversity.

Enter here to win your own signed copy of 3 Dead Princes and a copy of Woebegone, Nobacon's latest release.   We will give away 1 set now and 1 set in early 2011.  All you have to do is follow ChiIL Mama on Twitter, Google Friends Connect, Networked Blogs, or RSS.   Then fill out the form below.   We're extending the give away for both 3 Dead Princes (signed by Alex Cox) and Zinester's Guide to NYC (ZG2NYC) signed by Ayun Halliday.   Entries will be accepted through next Tuesday midnight as usual.