SAVE THE DATES: THE HOUSE THEATRE OF CHICAGO ANNOUNCES THE 18TH SEASON OF ORIGINAL PLAYS

THE HOUSE THEATRE OF CHICAGO ANNOUNCES THE 18TH SEASON OF ORIGINAL PLAYS
FEATURING THE 10TH ANNIVERSARY OF THE HIT HOLIDAY PRODUCTION,
THE NUTCRACKER,
A WORLD PREMIERE AND THE CONTINUED SUCCESSFUL OPEN RUN OF
THE MAGIC PARLOUR 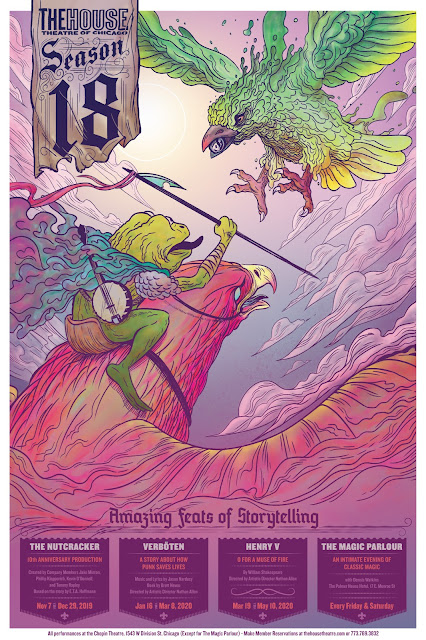 The House Theatre of Chicago is proud to announce its productions for the 18th season. The 2019 – 2020 Season will include the 10th anniversary production of The House’s original ballet-free production of The Nutcracker, November 7 – December 29; the world-premiere of Brett Neveu’s Verböten, January 16 – March 8, 2020; Shakespeare’s Henry V, directed by The House’s Artistic Director Nathan Allen, March 19 – May 10, 2020. The Magic Parlour, featuring magician Dennis Watkins, will continue its open run at The Palmer House, a Hilton Hotel. Subscriptions and Tickets may be purchased by calling (773) 769-3832 or by visiting www.thehousetheatre.com.

Memberships for the 18th season are now available. To purchase memberships or for more information, please visit www.thehousetheatre.com or call the box office at (773) 769-3832. Single tickets for Season 18 productions go on sale starting August 1.

The House’s 18th Season is supported by The MacArthur Fund for Arts and Culture at Prince. ComEd is the Official Lighting Sponsor of The House Theatre of Chicago. This program is partially supported by a grant from the Illinois Arts Council Agency.

Celebrating a full decade of making holiday memories with more than 30,000 audience members, The House brings this wholly original, ballet-free show back for its 10th Anniversary production. Appearing again at the Chopin Theatre, and featuring all new puppets, The Nutcracker is fast-paced, beautifully choreographed, family-friendly, and moving, even for those of us that might be on the Grinch’s side from time to time.

This fantastical expansion of the holiday classic centers on young Clara’s journey to save Christmas in the face of grief. With the help of a magical nutcracker, the brave girl risks the darkness, fights the Rat King, and saves her family. A modern holiday tradition weaving together riveting dialogue, astonishing puppetry, original songs, this spellbinding spectacle tells a heartwarming, darkly moving story of magic and hope—a fun outing fit for the whole family.

1983. Chicago. It’s do-or-die for Verböten—a band made up of outsider teens with seriously complex home lives. As they gear up for a show at The Cubby Bear that is sure to change their lives forever, can they keep their parents from destroying the fabric of their self-made punk rock family? With lyrics and music by Verböten’s original guitarist Jason Narducy (Split Single, Superchunk, Bob Mould) and book by Brett Neveu (Odradek, Pilgrim's Progress, Traitor), Verböten is inspired by the true story of Chicago's own young punks.

As Henry attempts to accomplish the impossible, so does Shakespeare in one of his most demanding works of stagecraft. The House adventures back and forth across oceans for justice, intrigue, romance, and the “alarms and excursions” of the battlefield. Featuring Brenda Barrie as Henry and Nathan Allen as the Chorus, The House entreats you to “let us on your imaginary forces work,” and witness one of Shakespeare’s most compelling examinations of our capacity for leadership.

Artistic Director, Nathan Allen, reflects, “A few of us started dreaming about starting a theatre company while studying classical theatre in London. Like Shakespeare’s theatre, the company we imagined would be founded to engage the audience’s imagination in ‘amazing feats of storytelling.’ Nowhere are those founding ideas better described than by Shakespeare himself. And for many in The House’s ensemble, returning to this text feels like returning to the root ideas of our work together.”

Award-winning, third-generation magician Dennis Watkins invites you to his evening of sophisticated tomfoolery in one of the Windy City's most exclusive and long-running entertainment experiences. The Magic Parlour is replete with mind-blowing magic and mind reading to ignite your imagination in an intimate suite at the historic Palmer House Hilton Hotel in downtown Chicago. Guests convene at Potter's Lounge and will be escorted to the private performance venue. The performance lasts approximately 80 minutes.

Following select performances of The Magic Parlour, experience Dennis Watkins’ world-class sleight of hand in an even more intimate and exclusive setting with The Encore Room. Limited to 10 guests at a time, The Encore Room also offers guests a unique opportunity to participate in a Q&A with Watkins where they can learn more about his family legacy, his remarkable life in magic, and his work as one of this country’s premier magical entertainers.

The House was founded in 2001 by a group of friends to explore connections between Community and Storytelling through a unique theatrical experience. Since becoming eligible in 2004, The House has won 24 Joseph Jefferson Awards, became the first recipient of Broadway in Chicago’s Emerging Theater Award in 2007, and was awarded a 2014 National Theatre Company Grant by the American Theatre Wing, founder of the Tony Awards. The 18th season of original work begins this November and The House will continue its mission to unite Chicago in the spirit of community through amazing feats of Storytelling.
Posted by Bonnie Kenaz-Mara at 12:37 PM

Email ThisBlogThis!Share to TwitterShare to FacebookShare to Pinterest
Labels: 18th season, 2019-20 season announced, brett neveu, Dennis Watkins, save the dates, Shows on our radar, The House Nutcracker, THE HOUSE THEATRE OF CHICAGO, The Magic Parlour