REVIEW: THE CROWD YOU’RE IN WITH Via AstonRep Theatre Company at The Raven Theatre Through June 16, 2019

ChiIL Live Shows on our radar
AstonRep Theatre Company
THE CROWD YOU’RE IN WITH
By Rebecca Gilman
Directed by Co-Artistic Director Derek Bertelsen
Though June 16, 2019 at The Raven Theatre 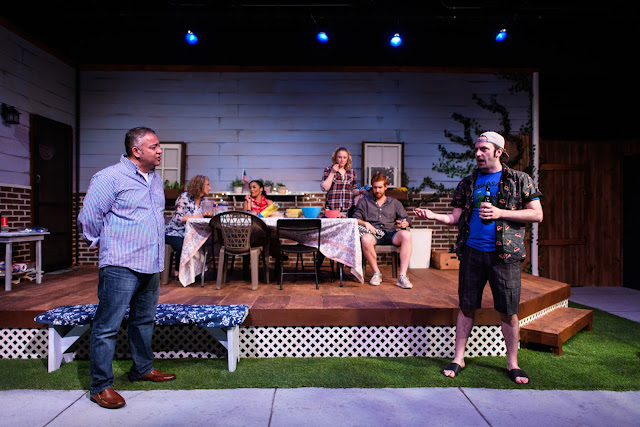 Sometimes adulting is tough. Sometimes you throw a barbecue and nobody eats. In The Crowd You're in With, Chicago back yard BBQ conversations touch on everything from whether to reproduce to toddlers in Dead Kennedys wear. I'm a long time fan of Rebecca Gilman's writing and she's crafted a clique of characters here that I love to hate. 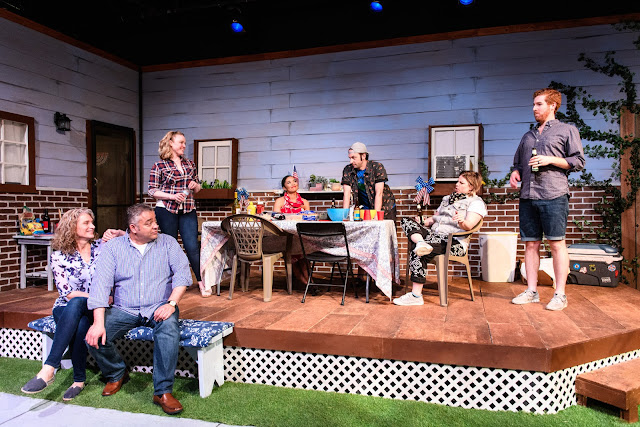 The pregnancy set off procreation plans among her best friend, Sara Pavlak McGuire* (Melinda) and her husband, Martin Diaz-Valdes (Jasper). With an impending birth set to change the friend dynamic, this little group fights, flees before dinner, and splinters. The conversations are timely and life changing, and some touch on divorce worthy topics that should have been addressed in this couple's marriage long before. The two younger men lack maturity and are irritating at best and pretentious at worst. In their defense, the type is quite believable and played out with panache by Martin Diaz-Valdes and Nick Freed. The women, the unfortunately named Windsong and her BFF, Melinda, are more likable, though still fabulously flawed characters. 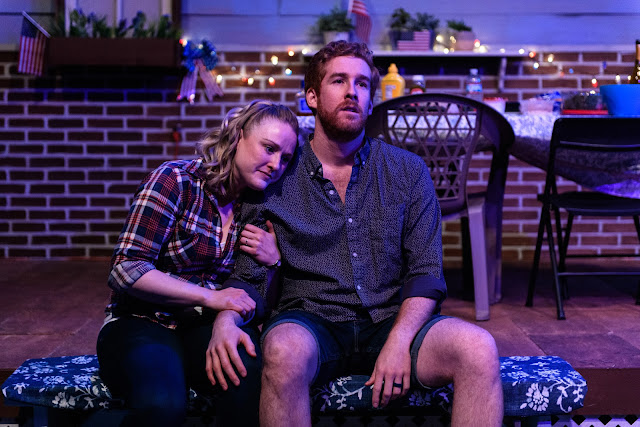 
I did enjoy the childless by choice landlords the most. This left leaning, political activist couple are the only ones who seem confident, stable, and happy with their life choices. They flee the barbecue early on, when hostilities escalate, but return later for food, and a delightful two on one conversation with Jasper. Those three are the only ones to actually eat, at what's best described as the BBQ aftermath and clean up stage.

We're the first generation with easy access to birth control, making parenthood a true choice versus an inevitable conclusion to marriage. It's refreshing and powerful to see these debates play out on stage. Procreation is truly a life altering choice, and when and whether to become parents is a debate rarely seen addressed in productions. 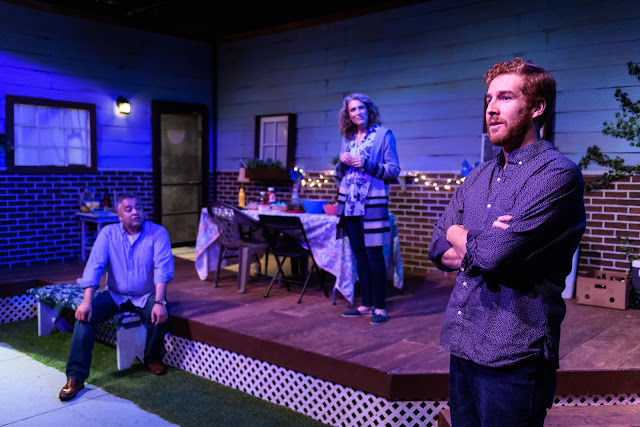 
Add in a band, and the decision to carry on with a creative hobby that will admittedly never become a profession, and what was meant to be a lighthearted BBQ has some heavy implications. How do we transition into the world of being 24/7 parents without losing our former selves entirely? What are the implications when one or both potential parents aren't ready to step up? Can parents of a time intensive newborn or toddler still make time to hang with childless friends and can childless landlords legally or ethically keep their rental units and communal yards baby-free zones too? 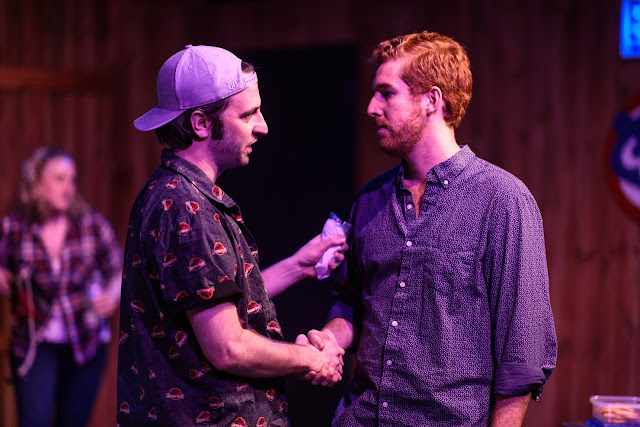 
The dialogue and debates here are well crafted and ring true. If you enjoy being a fly on the wall, and watching five friends struggle to grow up without imploding long term friendships and relationships, then don't miss this. Recommended.


Bonnie Kenaz-Mara is a Chicago based writer-theater critic-photographer-videographer-actress-artist-general creatrix and Mama to two terrific teens. She owns two websites where she has published frequently since 2008: ChiILLiveShows.com (adult) & ChiILMama.com (family friendly). 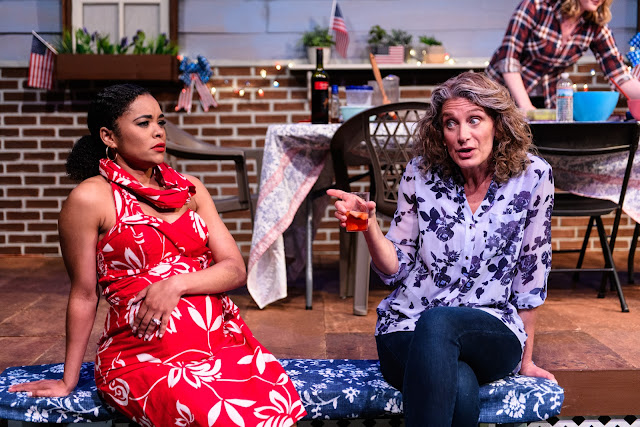 
A backyard barbeque is the perfect place to tackle life's big questions: Is the chicken done? Does the band need a new tune? Is this the right time to have a baby? Gilman's fresh and moving play takes an intimate look at modern families, friendships and the ins and outs of love. 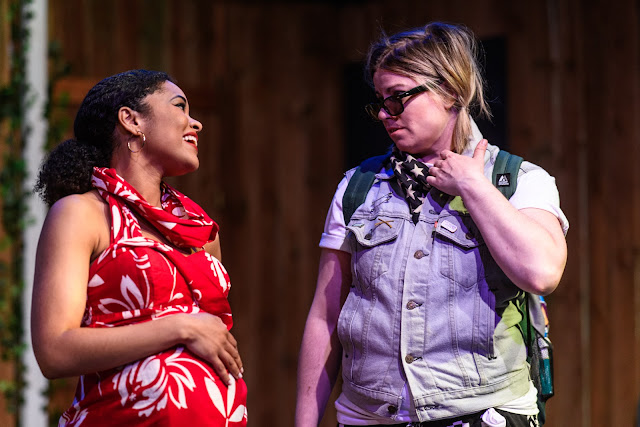 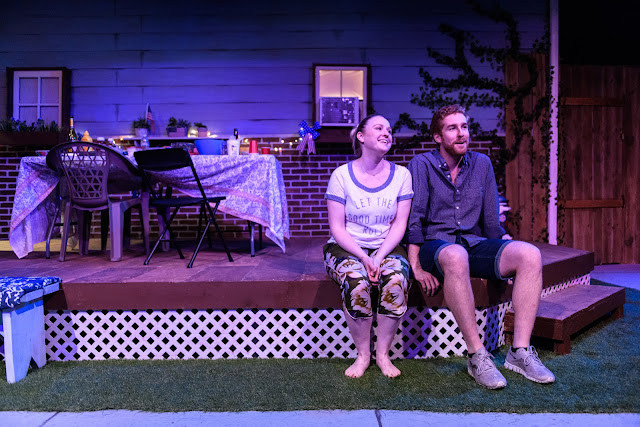 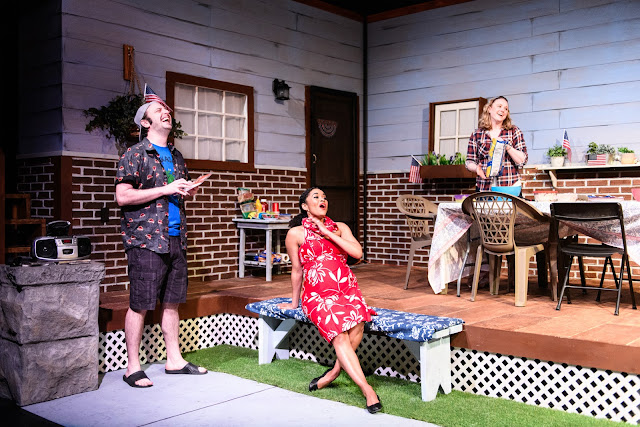 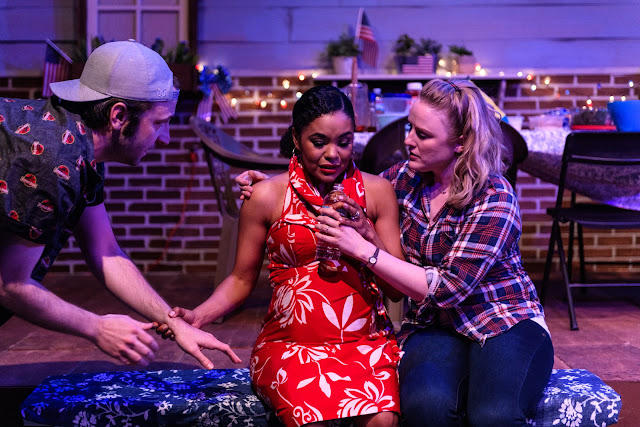 Rebecca Gilman (Playwright) is an artistic associate at Goodman Theatre. Her plays include Luna Gale, A True History of the Johnstown Flood, Dollhouse, Boy Gets Girl, Spinning Into Butter, Blue Surge (all of which were originally produced by the Goodman), Soups, Stews, and Casseroles, 1976 and The Crowd You’re in With (also at the Goodman), The Glory of Living; The Sweetest Swing in Baseball and The Heart is a Lonely Hunter. Boy Gets Girl received an Olivier nomination for Best New Play. Gilman was named a finalist for the 2001 Pulitzer Prize for The Glory of Living. She is a member of the Council of the Dramatists Guild of America and a board member of the ACLU of Illinois. A graduate of the MFA in playwriting program from the University of Iowa, Gilman is now a professor of playwriting and screenwriting at Northwestern University as part of its MFA in Writing for the Screen and Stage program. In 2016, she was inducted into the Alabama Writers Hall of Fame.

Derek Bertelsen (Director) joined AstonRep in 2013 and he currently serves as Co-Artistic Director. Previous directing credits with AstonRep include Doubt, Next Fall, Wit, The Lieutenant of Inishmore, The Lyons, the world premiere of The Black Slot, The Laramie Project, and co-directing Eleemosynary with Jeremiah Barr. He produced the sold-out run of Four By Tenn, a festival of one-act plays by Tennessee Williams. He serves as Artistic Director of The Comrades. He's also directed for BrightSide Theatre, Wilmette Center for the Arts, Pride Films & Plays and assistant directed at Goodman, Bailiwick Chicago and Steppenwolf Garage. Regional credits include Festival 56, Shawnee Summer Playhouse, New Ground Theatre and five seasons at Timber Lake Playhouse. 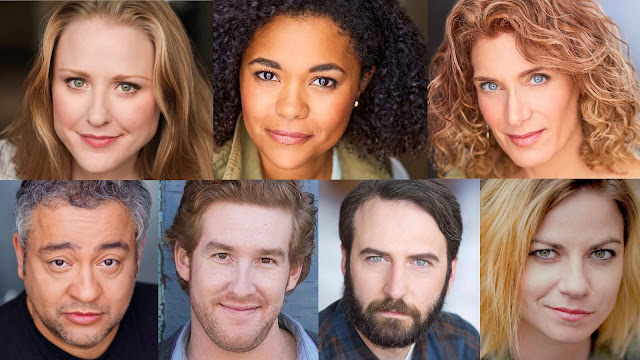