ONE-DAY MARATHON OF ALL 24 PEACEBOOK WORKS, ﻿OCTOBER 7 AT THE CHOP SHOP 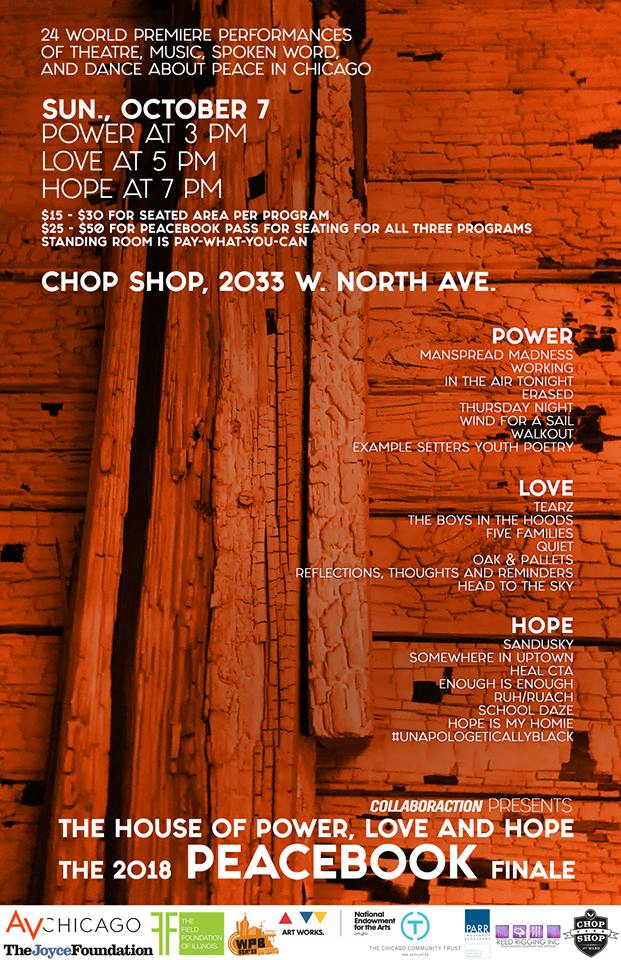 Sunday, October 7, Collaboraction will reunite all 200+ Chicago artists involved in the creation of this year’s PEACEBOOK Festival for a one-day-only, marathon celebration showing of all 24 world premiere works about peace at The Chop Shop, 2033 W. North Avenue in Bucktown.

The eight works from Hamilton Park plus the 16 that already premiered this month at PEACEBOOK Austin and PEACEBOOK Hermosa will be “re-mixed” into three one-hour programs starting at 3 p.m., 5 p.m. and 7 p.m.

The PEACEBOOK fall finale includes a free community meal between performances, peace panels and special guests. Tickets to each program are $30/$15 for artists, students, educators and veterans, or $50/$25 for an all access pass to all three shows.


Pay What You Can admission is also available for standing room only.


﻿Peacebook 2018 Trailer
Watch excerpts from the 24 "chapters" that make up Collaboraction's 2018 PEACEBOOK.

“The 24 ‘chapters’ in this year’s third annual PEACEBOOK, chosen from more than 200 submissions, unite over 200 artists, from household names to neighborhood peace activists, all intent on creating real connections with Chicagoans in communities around the city,” said Anthony Moseley, PEACEBOOK Festival Director and Artistic Director of Collaboraction. “We encourage Chicagoans to be active, come to Englewood, discover new neighborhoods and hear new stories. In doing so, we will see our similarities and connections to one another. Only then we can start working together to dismantle oppression and cultivate peace and equity.”

Collaboraction’s third annual PEACEBOOK Festival kicked off September 7 and 8 at La Follette Park in Chicago’s Austin community. Hermosa’s Kelvyn Park was the second stop on the PEACEBOOK tour. All three PEACEBOOK host sites – La Follette Park, Kelvyn Park and Hamilton Park - are familiar terrain for Collaboraction after more than five years of embedding its artists in each community to create and present devised, hyperlocal works about peace via the Chicago Park District’s Night Out in the Parks event series.

Collaboraction (collaboraction.org), Chicago’s social contemporary theater, collaborates with a diverse community of Chicagoans, artists and community activists to create original theatrical experiences that push artistic boundaries and explore critical social issues. Since the company’s founding in 1996, Collaboraction has worked with more than 3,000 artists to bring more than 60 productions and events to more than 150,000 audience members. 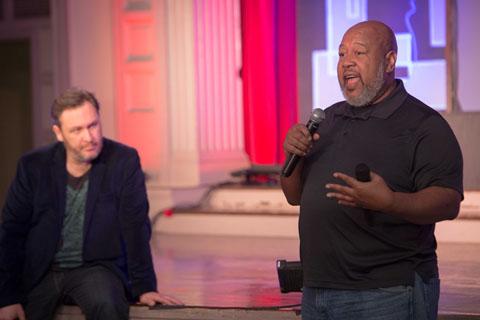 Collaboraction is led by Artistic Director Anthony Moseley, Managing Director Dr. Marcus Robinson, a company of 20 talented Chicago theater artists, and a dedicated staff and board of directors. The company’s vision is to utilize theater to cultivate dialogue and action around our most critical social issues throughout Chicago.

For the past five years, Collaboraction has partnered with the Chicago Park District through their Night Out in the Parks program, returning each year to cultivate relationships and theater in Englewood, Austin and Hermosa through the Crime Scene, PEACEBOOK and Encounter tours. Production highlights also include its series of Crime Scene productions responding to Chicago’s crime epidemic; Sarah Moeller’s Forgotten Future: The Education Project; 15 years of the SKETCHBOOK Festival; the Chicago premiere of 1001 by Jason Grote; the world premiere of Jon by George Saunders and directed by Seth Bockley; and The Intelligent Design of Jenny Chow: an instant message with excitable music by Rolin Jones.

Collaboraction also maintains an active Collaboraction For-Hire division, which creates custom special event design for private, corporate and civic clients, including the Art Institute, the City of Chicago and many more.

Collaboraction is supported by The Chicago Community Trust, The Joyce Foundation, The Field Foundation, the National Endowment for the Arts, DCASE and the Wicker Park & Bucktown SSA #33 Chamber of Commerce. This program is partially supported by a grant from the Illinois Arts Council, a state agency.

Collaboraction’s PEACEBOOK Festival is presented as part of the Chicago Park District’s Night Out in the Parks series, supported by Mayor Rahm Emanuel. Arts programming in neighborhoods across the city advances the goals of the Chicago Park District and the Chicago Cultural Plan. Now in its sixth year, the 2018 Night Out in the Parks series will host over 1,000 cultural events and programs at more than 250 neighborhood parks throughout the city, making community parks a safe haven and hubs of activity. Projects will vary from traditional performances and concerts, to movies, peace rallies, community workshops, nature based programs, dance pieces, festivals and more. The Chicago Park District has partnered with more than 100 arts and community organizations to expand and produce this successful initiative.
Posted by Bonnie Kenaz-Mara at 5:34 PM