Here at ChiIL Mama we're SO excited to partner up with Cirque du Soleil and offer our readers a stellar giveaway! Enter HERE for your chance to WIN a family 4 pack of tickets ($350 approx value) to opening night of TORUK – The First Flight on August 3rd! Enter early and often through midnight July 31st. I'll be there with my family on opening night, and you could be too. 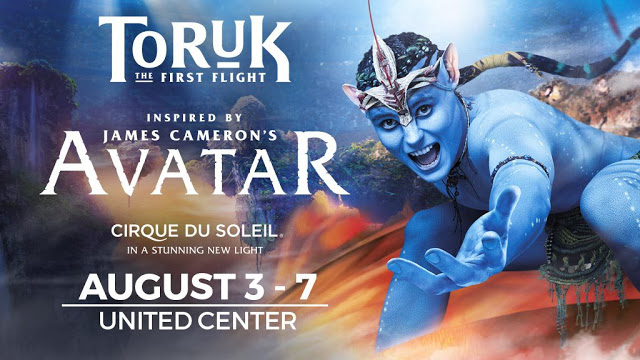 When a natural catastrophe threatens to destroy the sacred Tree of Souls, Ralu and Entu, two Omaticaya boys on the brink of adulthood, fearlessly decide to take matters into their own hands. Upon learning that Toruk can help them save the Tree of Souls, they set out, together with their newfound
friend Tsyal, on a quest high up in the Floating Mountains to find the mighty red and orange predator that rules the Pandoran sky. Prophecy is fulfilled when a pure soul rises among the clans to ride Toruk for the first time and save the Na’vi from a terrible fate.

In an effort to bring audience members involvement to a whole new level, Cirque du Soleil will be launching a first-of-its-kind app for TORUK – The First Flight.  Working with long-time technology partner SAP, the app will enhance the overall show experience and enable audience members to be a part of the action before, during and after the performance! The app can be downloaded HERE.

Disclosure: Thanks to Cirque du Soleil for providing us with complimentary tickets for review purposes and for our giveaway. We were not compensated in any other way. As always, all opinions are our own.