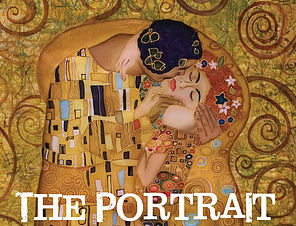 Klimt has long been a favorite artist of mine, so I'm particularly eager to catch the world premiere of “The Portrait”. The Greenhouse Theater Center (2257 N. Lincoln Ave.) will present “The Portrait” as part of the theater’s “Solo Celebration!” series, an eight-month series of provocative and powerful solo plays. Previews begin July 15th and we'll be there for the press opening July 20, so check back soon for our full review.

Written and directed by Susan Padveen, starring Cameron Pfiffner and co-produced with The Neopolitans, “The Portrait” tells the story of Gustav Klimt, the renowned painter of The Kiss, as he wrestles with a life-altering decision while also attempting to secure a sizable commission from a woman of Viennese society.

“Klimt’s work, like his story, is startling, distinct and enigmatic. This play thoughtfully delves into the often conflicted state of an artist, all at once torn between his devotion to his work, searching for the funds to continue it, and fulfilling the responsibilities that come with fatherhood and family,” said The Greenhouse Theater Center Artistic Director Jacob Harvey. “Susan Padveen and the collaborators she has assembled tell a story of Klimt that is both historical and topical, forcing us to question the place of the artist in our culture.”

“The Portrait” takes place at a time in Klimt’s life when he is navigating a tumultuous personal life, ever punctuated by his work.  This artist who broke boundaries with his iconic sketches, paintings and murals must make difficult choices and even tougher compromises if he and his family are to survive in an unkind world. In this one man tour de force, we meet Klimt as he sketches a potential client in his studio, and although his thoughts quickly wander to matters of the heart, he knows that he must win a commission for her portrait. As Klimt tries to capture the attractive young woman’s interest, he wrestles with a decision that could alter the trajectory of his life. Klimt will be portrayed by Cameron Pfiffner. At select performances, Matt Maxwell will portray the artist.

The performance schedule for “The Portrait” is as follows: Wednesdays – Saturdays at 8 p.m. and Saturdays and Sundays at 2:30 p.m. Previews begin July 15, and the opening night is Wednesday, July 20 at 7 p.m. Performances continue through Aug. 14.

Susan Padveen (Playwright/Director) is a freelance director, writer, educator and producer. Last season she returned to Polarity Ensemble Theatre, where she had previously directed Eugene O’Neill’s “Long Day’s Journey into Night” and “The White Airplane” by Darren Callahan, to direct the world premiere of Richard Engling’s “Anna in the Afterlife.” Last summer, she participated in an artist residency at the Ko Festival in Amherst, Massachusetts, continuing development of a devised play, “The In­Between,” to be produced this coming winter; and she co­curated and produced a Festival of devised work called “Dancing on the Ceiling” as a Box Partner at Stage 773. She has directed at Buffalo Theatre Ensemble, The National Jewish Theatre (where she was co­Artistic Director), Pegasus Players and the Neapolitans. Padveen is an Associate Professor at Columbia College Chicago in the Theatre Department, where she coordinates the directing program. Padveen is an associate member of the Stage Directors and Choreographers Society, where this year she is honored to have been selected to be a member of the 2016-17 Observership Class.

Cameron Pfiffner (Performer) graduated from Loyola University with a BA in Theater 1982, and subsequently spent the next eight years in Chicago working as an actor, director, designer and composer. Pfiffner served as Artistic Director for The Free Shakespeare Company, The Commons Theater (which is where he first met and worked with Susan Padveen, the playwright and director of “The Portrait”), and his own masked ensemble, Vizards. In 1986, Pfiffner participated in The British National Theatre’s first summer acting program for American performers, studying with Anthony Hopkins, Giles Block, Di Trevis, John Russell Brown, Ken Campbell, Roddy Maude-Roxby and other British stage luminaries. In 1992, he changed artistic focus and concentrated on making music as saxophonist and composer. His band, Sabertooth, began playing at Chicago’s world famous jazz nightclub, The Green Mill, where they still perform. Pfiffner was also the musical director and resident composer of The 58 Group, an interdisciplinary ensemble of dancers and musicians led by Chicago choreographer Ginger Farley. Pfiffner currently leads and writes music for three other bands, the 11-piece Marco Polo, his own quartet, and the saxophone ensemble Adolphe’S AX (which will be performing at this year’s Chicago Jazz Festival). His most recent appearance onstage as an actor was in his wife Christina Sedlmaier’s dance theater piece, “The Tendency to Exist,” at The Theater Building in 2005. Throughout his career, Pfiffner has been engaged in the visual arts, painting freelance for Chicago muralist Thomas Melvin, working at various scenic studios, illustrating a monograph on South American Marsupials for Philip Hershkovitz, Curator Emeritus of Zoology at Chicago’s Field Museum of Natural History, and executing various portraits and imaginative works for private collectors.

Matt Maxwell (Alternate Performer) recently returned to Chicago after a lengthy sojourn in Denver. His Colorado credits include “Fawlty Towers” with Equinox Theatre, “Greetings!” at Miners Alley Playhouse, “Apple” and “The Baby Dance” with Silhouette Theatre, “The Government Inspector” at Vintage Theatre, “Oliver!” at Breckenridge Backstage Theatre, “The Crucible” at Red Rocks Theatre, “Once Upon A Mattress,” “Footloose,” and “1776” with Performance Now and the Colorado premiere of “August: Osage County” with Abster Productions.  Matt is a graduate of the University of Chicago Law School. He is represented by Big Mouth Talent.

Gustav Klimt, born in 1862, is an Austrian symbolist painter recognized for his distinctive paintings, murals and sketches. His painting The Kiss is his best-known piece. He was a leader and prominent figure in the Austrian Secession, which was a movement by Austrian artists to move away from the prevailing conservative artistic styles. As a leader in the secession, Klimt was greatly influenced by Japanese art and design.

About Solo Celebration!
“The Portrait” is one of 12 plays featured in Greenhouse’s “Solo Celebration!,” which will include ten full productions and two limited engagements running June 2016 through February 2017. Among the other directors connected to solo series are Goodman Theatre Producer and Artistic Collective Member Steve Scott, Writer’s Theatre Resident Director Kimberly Senior, Directors Lab Chicago Artistic Director Elizabeth Margolius and Remy Bumppo Artistic Associate Linda Gillum. Some of the performers confirmed to star in solo works include Jeff Award-winner Kate Buddeke, acclaimed British actor Simon Slater, Karen Rodriguez and Carin Silkaitis.  Most productions will be produced in their entirety by Greenhouse, while other plays will be stated with co-producers including Sideshow Theatre Company and The Other Theatre Company. Greenhouse’s “Solo Celebration!” is co-produced by Forum Productions and underwritten by the Wendy and William Spatz Charitable Foundation.

As of 2016, the Greenhouse Theater Center embraced the true spirit of growth and launched its producing entity. With the announcement of our 8 month long Solo Celebration Series, helmed by Artistic Director Jacob Harvey, we will produce 10 solo plays from June 2016 to February 2017. Through this inaugural effort, we hope to expand the solo play cannon while also cultivating a larger conversation about the possibilities of the one-person play. With new ideas always incubating, the Greenhouse Theater Center is flourishing.