This is one of our annual favorites here at ChiIL Mama and ChiIL Live Shows. Come on out for a free, family friendly, outdoor sampler of Broadway In Chicago tunes from some of the top musicals of the decade, performed by cast members and hosted by Janet Davies of ABC 7. It's truly a treat and free for all. 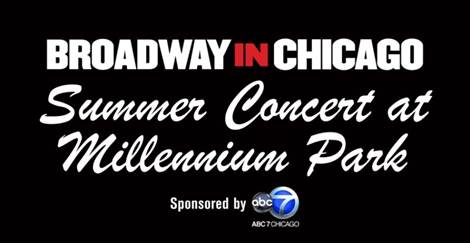 Now Including Performances from
STEPHEN TRASK, composer and lyricist of
HEDWIG AND THE ANGRY INCH and
Cast Members from THE KING AND I, SOMETHING ROTTEN! and STOMP

Broadway In Chicago is thrilled to announce the full concert line-up at the annual FREE BROADWAY IN CHICAGO SUMMER CONCERT, sponsored by ABC 7 Chicago and hosted by Janet Davies, ABC 7 Chicago’s entertainment reporter and host of the entertainment and lifestyle program 190 NORTH on ABC 7. The concert will take place on Monday, August 15, 2016 at 6:15 p.m. at the Jay Pritzker Pavilion at Millennium Park (201 E Randolph St).  The Broadway In Chicago Summer Concert at Millennium Park is presented with the City of Chicago Department of Cultural Affairs and Special Events.

This year there will be performances including Disney’s ALADDIN, BEAUTIFUL – THE CAROLE KING MUSICAL, THE BODYGUARD with Grammy® Award-nominee and R&B superstar DEBORAH COX, FINDING NEVERLAND, the 2015 Tony Award®-Winning Best Musical FUN HOME, the 2014 Tony Award®-Winning Best Musical Revival HEDWIG AND THE ANGRY INCH featuring composer and lyricist STEPHEN TRASK, Rodgers & Hammerstein’s THE KING AND I, Cameron Mackintosh's spectacular new production of Andrew Lloyd Webber’s THE PHANTOM OF THE OPERA, the completely original new musical comedy SOMETHING ROTTEN! and STOMP.

“What could be better than to sit or picnic in one of the world's premiere outdoor venues, Jay Pritzker Pavilion at Millennium Park, and get a free preview of fantastic Broadway shows?” said Eileen LaCario, Vice President of Broadway In Chicago. “For many, it’s the favorite concert of the year bringing together thousands of our dedicated theater-goers and introducing them to some of the greatest musicals of the decade.”

For more information on the Summer Concert or any Broadway In Chicago shows visit www.BroadwayInChicago.com.
Posted by Bonnie Kenaz-Mara at 7:02 PM