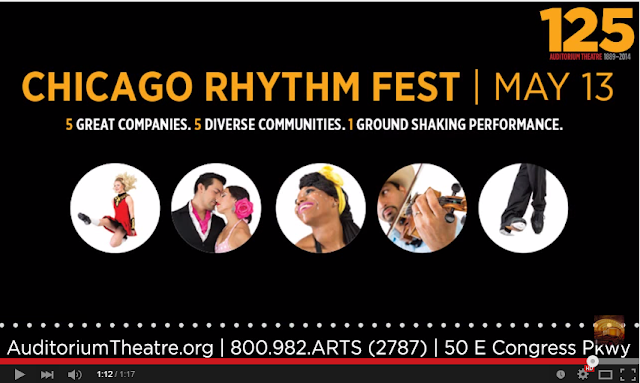 "Chicago has a long and venerable history when it comes to the percussive arts," said Auditorium Theatre Executive Director Brett Batterson. "We're excited to host five of the country's best ambassadors of the art form in one night, a chance to present an extraordinary range of talent and diversity. Each of these companies brings a unique cultural perspective to the art form, and the juxtaposition of each over the course of an evening will be fascinating and informative.”

The “Made in Chicago” Dance Series is sponsored by The Boeing Company.

The Chicago Rhythm Fest finale highlights critically acclaimed works from each company’s respective programming, featuring original choreography and the presentation of authentic cultural traditions from around the world. The Auditorium Theatre program on May 13 includes:

Ensemble founder Dame Libby Komaiko and Paco Alonso’s extraordinary “Zapateados” features a cast of a dozen men and women in traditional gaucho attire and giant poles to strike the earth, invoking the history of the Latin-American dance for the cowboy. “Zapateados”—translated to mean “tap dance” in Spanish—stems from Andalusian traditions. Ensemble Español currently boasts a repertoire of 125 works, including Spanish ballets, traditional folkloric suites and Flamenco dramas.

The Mexican Dance Ensemble, founded in 2001, highlights “Michoacan,” an authentic folk dance derived from the southwestern pacific region of Mexico. Dating back to pre-Hispanic times, the region’s lively folk dances feature playful parodies and charismatic salutes to family hierarchies, performed during festivals and special events throughout the year. The company also brings “Guerrero Caliente,” defined by fast, successive beats, as depicted in the state of Guerrero, Mexico. The Mexican Dance Ensemble has performed in renowned venues around the world, and first appeared at the Auditorium Theatre in 2013 as part of the Music + Movement Festival.

Leading up to the finale performance is STOMPING GROUNDS (through May 8), a free concert series taking place in various Chicago communities, highlighting African, Irish, Mexican, Spanish and American cultural traditions. For more information and a schedule, visit chicagotap.org/StompingGrounds.aspx.

STOMPING GROUNDS is made possible by major support from the Chicago Free For All Fund at The Chicago Community Trust with additional funding from the National Endowment of the Arts.

The Auditorium Theatre of Roosevelt University, located at 50 E. Congress Pkwy, is an Illinois, not-for-profit organization committed to presenting the finest in international, cultural, community and educational programming to Chicago, and to the continued restoration and preservation of the National Historic Landmark Auditorium Theatre.

The Auditorium Theatre is generously supported by the MacArthur Foundation, the Illinois Arts Council, the Sage Foundation, and the Palmer House Hilton.

For more information about programming, volunteer and donor opportunities or theatre tours, call (312) 341-2310 or visit AuditoriumTheatre.org.

CHRP’s vision is to establish the first global center for American tap and percussive arts, which will create a complete ecosystem of education, performance, creation and community in a state-of-the-art facility uniting generations of diverse artists and the general public. For information visit chicagotap.org.
Posted by Bonnie Kenaz-Mara at 5:12 PM