Broadway In Chicago is thrilled to announce the return engagement of the Tony, Grammy and Olivier Award-winning hit musical JERSEY BOYS, the story of Frankie Valli and The Four Seasons, will offer rush tickets for all performances. A limited number of rush tickets will only be available for purchase with a valid ID for students, senior and military patrons at the box office at the Cadillac Palace Theatre on the day of the performance and will cost $25 per ticket, with a limit of 2 tickets per valid ID.  The musical JERSEY BOYS will make its much-anticipated return to Chicago to play the Cadillac Palace Theatre (151 W Randolph) for the first time May 12 through May 24, 2015.

JERSEY BOYS is the winner of the 2006 Best Musical Tony Award®, the 2006 Grammy Award® for Best Musical Show Album, the 2009 Olivier Award for Best New Musical and the 2010 Helpmann Award for Best Musical (Australia). Following an overwhelmingly successful premiere engagement from 2007 to 2010, JERSEY BOYS returned to Chicago in 2012, hailed as “The most exciting musical Broadway has seen in years!” by Chris Jones, Chicago Tribune. “PURE PLATINUM! A SUPERCHARGED KNOCKOUT PRODUCTION!” raves Hedy Weiss, Chicago Sun-Times.  JERSEY BOYS worldwide has been seen by over 22 million people (as of January, 2015). 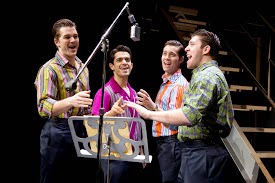 Catch a sneak peek of Jersey Boys! Log on to www.JerseyBoysTour.com/watch.

JERSEY BOYS is the story of Frankie Valli and The Four Seasons: Frankie Valli, Bob Gaudio, Tommy DeVito and Nick Massi.  This is the story of how a group of blue-collar boys from the wrong side of the tracks became one of the biggest American pop music sensations of all time. They wrote their own songs, invented their own sounds and sold 175 million records worldwide - all before they were thirty.

TICKET INFORMATION
Tickets for JERSEY BOYS at the Cadillac Palace Theatre are on-sale now.  A select number of premium seats are also available for many performances.  For groups of 15 or more, please call Broadway In Chicago Group Sales at (312) 977-1710.  Tickets are available at all Broadway In Chicago Box Offices (24 W. Randolph St., 151 W. Randolph St., 18 W. Monroe St. and 175 E. Chestnut), the Broadway In Chicago Ticket Line at (800) 775-2000, all Ticketmaster retail locations and online at www.BroadwayInChicago.com.  Additionally, there are day-of-show rush seats for each performance, where a limited number of tickets are available for $25 each.  Visit BroadwayInChicago.com for more details. 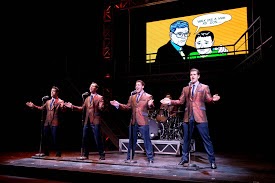