ChiIL out in Chi, IL with prehistoric puppetry
created in Australia. 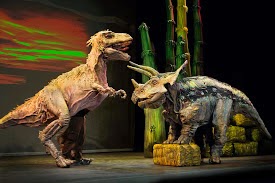 
Erth’s DINOSAUR ZOO Live™ is an experiential theatre production which takes audiences on a prehistoric journey into a new dimension where they get to meet a menagerie of insects, mammals and dinosaurs that once roamed the planet millions of years ago.  Featuring a large-scale cast of dinosaur puppets brought to life by sophisticated design and theatrical presentation and puppet mastery, these life-like dinosaur recreations connect children to paleontology in a fun and informative setting.  This monster production will feature sixteen dinosaurs on stage:  Children can watch and learn, but can also interact with the creatures in this fun, educational and unique presentation. 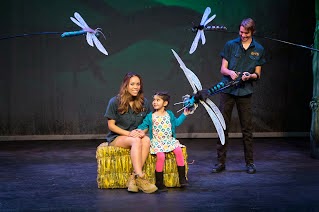 Erth’s DINOSAUR ZOO Live™ is both entertaining and educational.  The Sydney Morning Herald says; ‘It’s a rare and pleasurable work that manages technical brilliance, cultural insight and enchantment all in one go.’  Time Out London loved it: ‘It’s a delight to come face to face with the genuinely unexpected in Erth’s thoroughly entertaining kids’ show.’

Erth’s DINOSAUR ZOO Live™ is the creation of one of Australia’s most innovative and creative companies, Erth Visual & Physical, Inc., who bring the impossible to life.  For over 21 years, the company has developed a truly fantastic aesthetic and an extraordinary box of tricks, which now serve as the foundations of its unique visual and physical theatre work. Their work ranges from large-scale interactive environments such as ‘The Garden’, a prehistoric landscape inhabited by giant insects which premiered at the Melbourne International Festival of Arts, to more intimate in-theatre work and roving spectaculars.  The company regularly tours internationally and more than a million people have seen its dinosaurs in museums, and in performance works such as Radio Lab’s Apocalyptical,  Dinosaur Petting Zoo™ and DINOSAUR ZOO Live™

Erth’s DINOSAUR ZOO Live™ is directed by Scott Wright the co-founder of Erth Visual and Physical Inc. and its Artistic Director since inception in 1990.  He trained as a dancer and choreographer in Victoria, Australia and is a multi-skilled artist incorporating puppetry (one of his greatest loves), movement, acting, aerial, stilts and pyrotechnics.  During this period, Scott steered the company through many twists and turns, creating a successful national and international touring profile.  Scott has directed most of Erth’s successful touring shows, and worked with a large variety of national and international companies and institutions, individual artists and community groups. Scott is currently focusing on the survival of indigenous folklore, exploring how ancient stories can be retrieved and presented to new audiences.  This exploration takes him to remote communities throughout Australia, to meet with elders, learning and developing methods in which puppetry can tell stories of ancient creatures and landscapes.

The dinosaurs and other creature puppets, as well as the flora and fauna that make up the set are designed by Steve Howarth, a founding and fulltime member of Erth. From the Erth studio workshop he supervises a team of artists in the creation of the puppets, sets, props, costumes and associated elements that constantly tour the nation and the globe. In this principle role he has worked with a wide variety of people and organizations, and across numerous media over the past twenty years.  The first 15 years were spent performing in, on, and dangling from, many of the creations that he now devotes his full time to building.  Now off stage, he oversees the daily production of giant, teeth-gnashing dinosaurs and inflatable monsters that live alongside traditional fine arts and textiles work, and increasingly, he is incorporating new disciplines such as digital animation.  Steve recently directed his first work Taniwha! for Auckland Museum in New Zealand, where he worked closely with indigenous storytellers weaving together threads of Maori folklore which was then presented by live actors, puppets, and projection. Steve also mentors design students from several tertiary institutions and assists emerging artists in the implementation of their respective crafts. 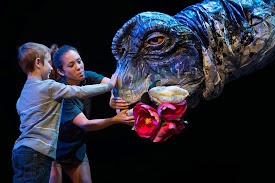 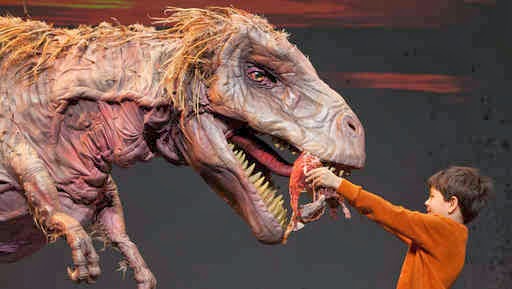 Posted by Bonnie Kenaz-Mara at 8:27 AM