October-November 2011 Shows On Our Radar With Age Guide 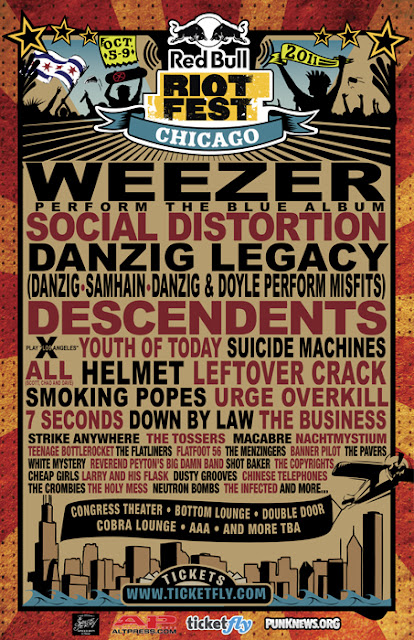 Of course, in Chicago we're lucky to have an overabundance of great shows to choose from.  Here's our entirely subjective list of bands we're planning to see, along with an age guide, so you know if the punk kin can tag along. 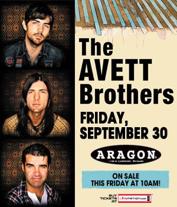 
The Avett Brothers (pronounced /ˈeɪvɨt/) is a folk rock band from Concord, North Carolina. The band is made up of two brothers, Scott Avett and Seth Avett, who play the banjo and guitar respectively, and Bob Crawford who plays the stand-up bass. Joe Kwon, cello, and Jacob Edwards, drums, are touring members of the band, with Kwon featured on recordings from 2007's Emotionalism to present. 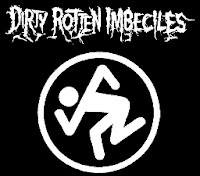 DRI at Reggies Rock Club-Sunday, Oct. 2 (however they will have a sub for drummer, Rob Rampy.   Details at Blabbermouth.net.)
All Ages

For about a year back in the 1970s the Mekons epitomized the risks, extremes and ludicrous promise of punk rock. It was a different time f’sure BUT eerily similar to NOW. For a while back THEN the Mekons were indeed very interested in punk rock but it wore off (for reasons too obvious & well documented to dwell on here). After the huge success of their Fast Product 45s and the reckless, doomed assault on the citadel that followed, the Mekons snuck off back to Leeds to lick their wounds only to emerge years later a wiser, stranger, multi-dimensional beast.


Maybe there’s a silver thread that runs all the way back to THEN through the collaborations and experiments of the 80s, 90s and Zeros, maybe there isn’t, but now we're talking a band looking at its 30th anniversary. Still, the music stands eternal, dusted down and probed for signs of life & to the amazement of all concerned no backward thrust of nostalgia was apparent, in fact quite the opposite. Layers of historical snot were scraped away to reveal a crop of songs oozing tough & timeless optimism for the now, the current, the necessary & the possible... and now the Mekons (with one eye on the past and both feet in the river) are very interested in punk rock again.

Riot Fest:
****all Congress Riot Fest Shows and X at Bottom Lounge are all ages.   Bring the punk kin.    However, Riot Fest doesn't do anything cool like North Coast (12 & under free) or Lollapalooza and Pitchfork (under 10 free).   If you wanna walk together and rock together, it'll cost ya the same as an adult ticket.
****Our top picks are in bold black
Riot Fest 2011 Chicago
FOR WRISTBAND PICK UP INFORMATION: consult this page. 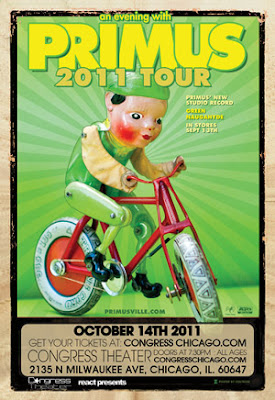 
Primus started out as an underground cult phenomenon in and around the San Francisco bay area until their popularity grew to the point they became certified gold album sellers (with their 1991 album Sailing the Seas of Cheese).
Fronted by the inimitable Les Claypool, considered one of the most versatile and unique bass players alive, Primus offers up a zany and eclectic style of music all their own, throwing in a healthy amount of the bizarre for good measure.


35th Anniversary Tour...
Performing Damned Damned Damned and The Black Album back to back...
THE DAMNED
18+
7pm
$26
Alien Queen-Metro-Oct. 28


The Scooty & JoJo Show and Metro Present...
A Special HALLOWEEN Showing of
ALIEN QUEEN: THE CONCERT

18+
9pm
$16 advanced/$20 day of/$30 VIP
There's no better way to celebrate Halloween than Alien Queen! Alien Queen: The Concert combines the legendary music of Queen with an outrageous parody of the "Alien" films to create a top-notch Queen tribute band made up of H.R. Giger-inspired aliens, cross-gendered humans, and some of Chicago's best singers and rock musicians. The event will be a full evening of rock and ridiculousness, with special guests performing before Alien Queen: The Concert takes the stage.
Mastodon-Riv-Nov. 11 (with The Dillinger Escape Plan / Red Fang)
All Ages
6PM
$24

Posted by Bonnie Kenaz-Mara at 3:46 PM

Email ThisBlogThis!Share to TwitterShare to FacebookShare to Pinterest
Labels: Shows on our radar