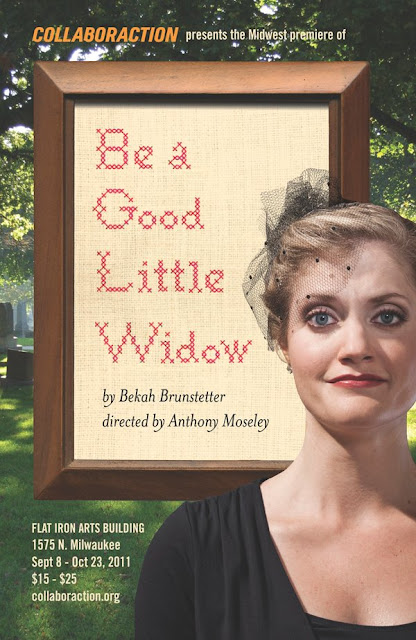 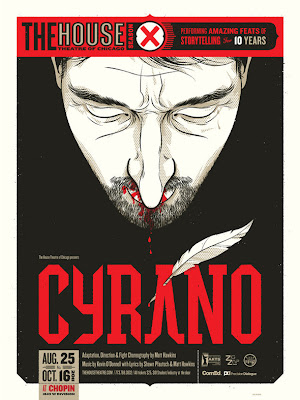 Cyrano is a hit!
"INTRIGUING AND ENJOYABLE"
Chicago Tribune

We had tickets which we sadly had to postpone, due to a particularly nasty flu.   We still hope to get over to Cyrano and post a full review  ASAP.   Meanwhile, we've been consistently impressed with the caliber of The House productions and don't hesitate to recommend checkin' Cyrano out, even sight unseen.

SHOWTIMES: Thursdays, Fridays and Saturdays at 8:00 pm, Sundays at 7:00 pm


SPECIAL PREVIEW THIS FRIDAY! Join The House at Friday's preview and stay for The Magic Parlour FREE!
LOCATION: The Chopin Theatre Upstairs Theatre (1543 W. Division St., Chicago, IL)
TICKETS: $25 at www.thehousetheatre.com or by phone at 773.769.3832, $10 Student and Industry rush tickets available at all performances.
SPECIAL BENEFIT PERFORMANCE on 09.15.11!
A week from today, there will be a pre-show reception including tasty finger foods and beer/wine with a SHORT presentation by members of Cyrano's core creative team.
Following the reception is the performance of CYRANO! Edmond Rostand's classic tale of love, Cyrano de Bergerac, receives a fresh take from the House Theatre of Chicago to open its 10th Anniversary season. The company's own Matt Hawkins adapts, directs and choreographs the fight scenes for this high-energy production, in which Cyrano pursues the fair Roxanne through new original music, poetry and spectacular swordplay. Music by Kevin O'Donnell with Lyrics by Shawn Pfautsch and Matt Hawkins.
Where: Chopin Theatre, 1543 W. Division
How much: $50 - proceeds to benefit The House Theatre of Chicago in its milestone 10th season!
Facebook event link

Save the Date:
Broadway In Chicago's Remaining 2011-2012 Season
LOVE, LOSS, AND WHAT I WORE; ANN: AN AFFECTIONATE PORTRAIT OF ANN RICHARDS; MEMPHIS; DONNY & MARIE: CHRISTMAS IN CHICAGO; LA CAGE AUX FOLLES and COME FLY AWAY. Off-season specials include CHICAGO, MARY POPPINS, ROCK OF AGES, FIDDLER ON THE ROOF and THE ADDAMS FAMILY.   Tickets are available now to all shows for groups of 15 or more.

The 2011-2012 Season Series emphasizes Broadway In Chicago's long-standing commitment of bringing the best of Broadway to Chicago. The complete season line-up, including performances dates and venues, is as follows:
LOVE, LOSS, AND WHAT I WORE
Sep. 13 - Oct. 23, 2011
Broadway Playhouse at Water Tower Place

LOVE, LOSS, AND WHAT I WORE, with its starry rotating cast and wildly entertaining subject matter, is the toast of New York, and the "Best Of The Year!"-Time Out New York. Like the popular book, LOVE, LOSS, AND WHAT I WORE uses clothing and accessories and the memories they trigger to tell funny and often poignant stories that women of all ages can relate to. "Goes directly to the heart, soul, and vanity of every woman, young and old."-Liz Smith, Variety.
ChiIL Mama will be there opening night on the 18th, and we'll have a full review for you the next day.   Stay tuned this week for photo filled fun from our Love, Loss and What I Wore press event at Water Tower Place.

ANN: AN AFFECTIONATE PORTRAIT OF ANN RICHARDS is a play with Emmy Award-winning stage and screen actress Holland Taylor, from TVs "Two and A Half Men." This hilarious and touching evening of theatre joyously celebrates a dynamic, inspiring woman and beloved daughter of Texas. From the fiery politician to the compassionate loving mother, Holland Taylor weaves a magical touch of the past and present in this no-holds barred story of Ann Richards that will leave audiences with an enhanced sense not only of a person and a time, but of themselves. Hold onto your hat!

TURN UP THAT DIAL... From the underground dance clubs of 1950s Memphis, Tennessee, comes a hot new Broadway musical that bursts off the stage with explosive dancing, irresistible songs and a thrilling tale of fame and forbidden love. Inspired by actual events, MEMPHIS is about a white radio DJ who wants to change the world and a black club singer who is ready for her big break. Come along on their incredible journey to the ends of the airwaves- filled with laughter, soaring emotion and roof-raising rock 'n' roll. Winner of four 2010 Tony Awards including Best Musical. Get ready to experience Broadway's most exciting new destination... MEMPHIS!

Spend the holidays with America's favorite brother and sister team! DONNY & MARIE - CHRISTMAS IN CHICAGO, a holiday production starring America's favorite sibling entertainers, will play a limited engagement at the Oriental Theatre. DONNY & MARIE are coming to Chicago fresh off their Broadway debut together with the critically acclaimed successful and twice-extended run at the Marquis Theatre in New York. In the holiday tradition of the "Osmond Family Christmas" television specials, DONNY & MARIE invite you and your family to join them to celebrate the joy of the season in true Osmond fashion, in person, as the pair share a Chicago stage for the first time. With a dash of Christmas spirit and their trademark show-stopping production numbers, DONNY & MARIE - CHRISTMAS IN CHICAGO features your favorite hits mixed with the irresistible chemistry that made them international stars.

Three-time Tony Award-winner including the award for BEST MUSICAL REVIVAL, LA CAGE AUX FOLLES is coming to the Bank of America Theatre. This hilarious new production of LA CAGE AUX FOLLES was the biggest hit of the 2010 Broadway season, leaving audiences in stitches night after night! LA CAGE AUX FOLLES tells the story of Georges, the owner of a glitzy nightclub in lovely Saint-Tropez, and his partner Albin, who moonlights as the glamorous chanteuse Zaza. When Georges' son brings his fiancee's conservative parents home to meet the flashy pair, the bonds of family are put to the test as the feather boas fly! LA CAGE AUX FOLLES is a tuneful and touching tale of one family's struggle to stay together, stay fabulous and above all else, stay true to themselves.

COME FLY AWAY is the new Broadway musical that brings together the legendary music of FRANK SINATRA and the creative vision of Tony Award-winner TWYLA THARP (Movin' Out). This one-of-a-kind experience combines the seductive vocals of "Ol' Blue Eyes" with the sizzling sound of a live on-stage big band and the visceral thrill of Tharp's choreography. As 14 of the world's best dancers tell the story of four couples falling in and out of love, you will experience the exhilaration of a first kiss, the excitement of a first dance, and the bittersweet moments of a first good-bye in a world of sparkling romance and astonishing beauty. COME FLY AWAY features a score of beloved Sinatra classics including "Fly Me to the Moon," "My Way," "New York, New York" and "Witchcraft."

As the longest-running musical revival playing on Broadway, the second longest-running musical production currently playing on Broadway and the fifth longest-running production in Broadway history, it must be something in its name that makes CHICAGO so successful! Set amidst the razzle-dazzle decadence of the 1920s and starring John O'Hurley, CHICAGO is the story of Roxie Hart, a housewife and nightclub dancer who maliciously murders her on-the-side lover after he threatens to walk out on her. With a book by Fred Ebb and Bob Fosse, music by John Kander and lyrics by Fred Ebb, CHICAGO is the winner of six 1997 Tony Awards including Best Musical Revival and the Grammy Award for Best Musical Cast Recording.

This high-flying musical returns, bringing its own brand of Disney magic back to Chicago! Featuring the irresistible story and unforgettable songs from one of the most popular Disney films of all time, plus breathtaking dance numbers and spectacular stage-craft, MARY POPPINS is everything you could ever want in a hit Broadway show! So get swept up in the fun of this dazzling musical the New York Post gives 4 out of 4 stars and calls "a perfect piece of musical theater."
Can't wait to take the kids to this one.   They're both studying aerial arts with CircEsteem, so flying productions are extra fun.

BACK BY POPULAR DEMAND! In 1987 on the Sunset Strip, a small town girl met a big city rocker and in LA's most famous rock club, they fell in love to the greatest songs of the 80s. It's ROCK OF AGES, an arena-rock love story told through the mind-blowing, face-melting hits of JOURNEY, NIGHT RANGER, STYX, REO SPEEDWAGON, PAT BENATAR, TWISTED SISTER, POISON, ASIA, WHITESNAKE and many more. Don't miss this awesomely good time about dreaming big, playing loud and partying on! Ellen Hager from LA Splash for Chicago raves, "ROCK OF AGES will be the most fun you'll have all year! It doesn't matter what your age; this immensely entertaining roller coaster ride through the 80s is something you will not want to miss out on!"
Rock of Ages makes our highly recommended list!   Check out ChiIL Mama's prior review HERE and our patron interviews HERE.

2011 Broadway In Chicago Season Series ticket holders will receive a multitude of special benefits, including savings up to 69%, priority seating at each venue, ticket exchange privileges, pre-paid and discounted parking, access to gift cards to give tickets as gifts, as well as the first opportunity to purchase additional tickets to future Broadway In Chicago productions, including those not currently listed in the 2011 Season Series. 2011 Season Series subscription packages are on sale now, and are available by logging onto www.BroadwayInChicago.com or calling the Season Ticket Hotline at (312) 977-1717.

Email ThisBlogThis!Share to TwitterShare to FacebookShare to Pinterest
Labels: act out, Broadway in Chicago, collaboraction, the house theatre