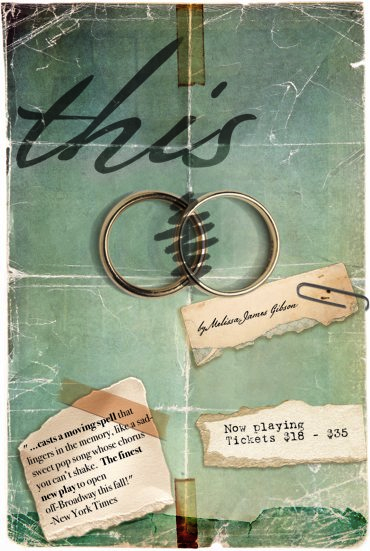 We've been raving about how amazing Theater Wit's production of This is since February.   Today is the final, closing performance of this poignant, Jeff Recommended show.   If you haven't found your way to This yet, I have one word for you, GO.  I'm still laughing about Jeremy Wechsler, the artistic director of Theater Wit's comments about the play's title.   He was bemoaning the fact that Googling "This play" brings an e-avalanch of unrelated topics.   He said that he'll have a talk with the playwright, Melissa James Gibson, and convince her to make up a distinctive, unique word that doesn't appear in any dictionary for her next show title!

At ChiIL Mama, we've been exploring how creatives parent and how parents create.   Having children changes things...the choices we make in theatre, art and music.    Wechsler is a Chicago Dad with a 5 year old.   And it was great to see him in action during the final phase of previews on This, as the core of the show deals with this dynamic.   As the friends in This navigate parenting teens and toddlers, dead end jobs and middle age foibles, the unseen children are often mentioned and are certainly a contributing factor to the changes and choices the characters make.


Gibson writes with wit and wisdom.   Her dialogue and character relationships come off as natural and fun.   And it's rare to find a play these days, that evokes both laughter and tears from an audience.   Wechsler called this a dramedy, which is true in the sense that the dialogue is truly funny and the laughs are there.   I was cracking up in solidarity at Gibson's lines like "I hate the word blog. It sounds like a pile of snot."   Yet the situations she throw her characters into, are anything but funny.


What do you do when the unthinkable happens?   Your spouse dies and leaves you a widow in your 30's.   Your husband sleeps with your best friend of 20 years.   What's worth fighting for?    What's unforgivable?    What happens when the stresses of sleep deprivation and the relentlessness of caring for a newborn, threaten to tear a loving couple apart.   What happens when a sexy, French, bisexual, Doctor Without Borders (or morals), enters the mix?

There are 3 versions to every story--what he said, what she said, and what really happened.   My husband's been working on First 48 for A & E, tailing Chicago's special victims detectives for months, and that's what they swear by.   These are the guys who handle domestic disputes, kidnappings and missing persons, and they've heard it all.


Gibson's This has a field day with this dynamic and then adds in an extra twist.   This circle of friends includes a guy who has superhuman memory and the uncanny ability to repeat events verbatim, that lands him on talk shows.   He rarely unleashes his gift on his friends, but ultimately speaks up to set the record straight.   We were absolutely blown away by This, and highly recommend it.


If you still have not made it out to see This, grab a sitter and go tonight!    ChiIL Mama/ChiIL Out readers still qualify for a $10 discount!   To get your complimentary tickets, you can just use the code CHILLOUT when you reserve your tickets by phone at 773-975-8150 or at Theater  Wit's website, http://www.theaterwit.org/boxoffice/production/?production_id=24

Jane is a recent widow whose dating life is a shambles, and her helpful friends are only helping make things more complicated. Tom and Merrill think it's time that their windowed friend Jane comes out of her shell and starts dating but after a party game goes awry the resulting affair threatens to unravel their entire circle of friends. Join us for a powerhouse production of Gibson's latest rueful comic meditation on love, adulthood and adultery. An honest and true comedy how we all are backing into middle age today.