She's crafty--she gets around.   Get crafty at Beat Kitchen's Winter Fest Sat at noon
Disney on Ice Toy Story 3 is Here!   January 26th-30th at Allstate Arena and February 2-13th at the United Center.   Use this link for discount tickets http://www.ticketmaster.com/search?tm_link=tm_homeA_header_search&q=disney+on+ice+chicago
with the code MOM.  ChiIL Mama can't wait to check it out.


We also can't wait to go to Monster Jam at Allstate Arena on opening night, Friday, February 11th!   Use this link for discount tickets http://www.ticketmaster.com/search?tm_link=tm_header_search&q=monster+jam+allstate+arena
**Creative challenge.   If you could bring one of your toys to life, like the Toy Story characters, which one would it be, and who in Toy Story 3 would they most likely hang out with?


Name and design/describe your own monster truck.


Parents can dictate kids' words and enter below.   Contest ends February 13th, when the Ice Show leaves town.   2 entries if you answer BOTH questions and an extra entry for each documented social media share. 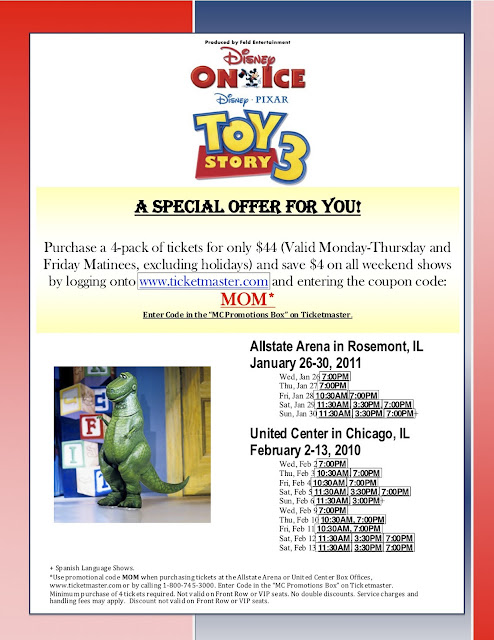 Thursday:   The Shams (Chicago's original rock folk group)-We've said it before, but we'll say it once again-highly recommended parents night out.   We've already given away our pair of tickets, but we'll have a review of their latest CD, and some disc give aways still coming up.  We'll also have a photo filled show recap up for you soon.
Chicago Roots Collective & Chicago Bluegrass & Blues Festival Present: The CRC Showcase One Year Anniversary
The Shams Band
Derek Nelson & The Musicians
Cole DeGenova & The Peoples Republic
Thursday, January 27 2011 8:00 PM


After opening for Edward Sharpe & the Magnetic Zeros at the 2010 Chicago Bluegrass and Blues Festival, The Shams Band looks to develop their own nitche in the Chicago music scene. These young garage rockers bring energy, passion and captivating harmony to every live performance.
“The Shams Band scene was reminiscent of a southern dance hall upturned by bad-boy rockers. If it weren’t for their mid-western look, a body almost forgot she was in Chicago. With tinges of Wilco, Chuck Berry, and Sly and the Family Stone wrapped up in a rootsy twang package, the energy of The Shams Band is contagious.” -Erin Keane [Via Chicago]
Follow | @TheShamsBand | @DNelsonMusic
Saturday:
Beat Kitchen Winter Fest


Bestselling Author Peggy Orenstein Explores the Effects of Princess-Mania at Women & Children First Bookstore
When journalist Peggy Orenstein published an essay in The New York Times Magazine about the “princess-mania” that has overtaken a new generation of little girls, she was not prepared for a firestorm. But “What’s Wrong with Cinderella” swiftly shot to the top of the Times’ websites “most emailed” list and elicited hundreds of reader responses. Now Orenstein has expanded her study in to the book Cinderella Ate My Daughter: Dispatches from the Frontlines of the New Girlie-Girl Culture (Harper, January 25, 2011), which she will be reading from and discussing on Tuesday, February 1, at 7:00 p.m. at Women & Children First Bookstore, 5233 N. Clark St. in Chicago. Call 773-769-9299 for more information.
Orenstein, who had already garnered a reputation as a “girl expert” with her groundbreaking bestseller, Schoolgirls: Young Women, Self-Esteem, and the Confidence Gap, thought she was simply musing on her own observations and reactions to her young daughter’s obsession with Disney princesses and predilection for the color pink. Clearly, though, she had touched a cultural nerve: many parents, she discovered, shared her concerns about the significance of this seemingly-retro trend toward the ultra-feminine, and the role the ubiquitous marketing machine plays in packaging it and promoting it.
With the keen perceptions of the seasoned journalist, the emotional investment of a mother, and a wittiness all her own, Orenstein ventures to the lands of Disney and American Girl, visits the toy industry’s largest trade show, and even braves a Hannah Montana concert. She returns to the original fairy tales, seeks out girls’ virtual presence online, and ponders the meaning of child beauty pageants. In the process, she faces her own confusion as a mother and woman about issues that rearing a girl raise about her own femininity.
Orenstein is the author of the best-selling memoir Waiting for Daisy. A contributing writer to The New York Times Magazine, her work has appeared in the Los Angeles Times, USA Today, Vogue, Elle, Parenting, O: The Oprah Magazine, Salon, and The New Yorker, and she contributes commentaries to NPR’s “All Things Considered.”
This event is free and open to the public.
Women & Children First is an independent, feminist bookstore celebrating 30 years serving ’s literary and progressive communities.

Give Something Back:
Adventure Stage is one of our favorite local theatres for family friendly fare.
Come out and eat, drink and be merry for a good cause.
Join us for some fun at Small Bar this Monday!
Monday, January 31st
7:00-10:00pm
Small Bar, 1415 W Fullerton
$25 Will Get You
FOOD!
Hearty appetizer spread
DRINKS!
Two drink tickets
MUSIC!
Live music by the lounge band Miss Honey and the Combs (featuring ASC Staff and Ensemble Members Brandon Campbell
and Jana Liles)
LAUGHS!
Episodes from Factory Theater's The New Adventures of Popeye (featuring ASC Ensemble Member Sarah Rose Graber)
A KINDLE!
Possibly! We will be raffling off a Kindle!
Cash only, at the door.
This event will be hosted by the vivacious Dani Bryant. (ASC Ensemble Member). All proceeds go to support our spring production of Sinbad; The Untold Tale
Hope to see you there!
Posted by Bonnie Kenaz-Mara at 4:18 PM