Writers Theatre opens the 2019 tour of The MLK Project: The Fight for Civil Rights With FREE MLK Day Chicago Performance at the Chicago History Museum

Writers Theatre opens the 2019 tour of
The MLK Project: The Fight for Civil Rights
By Yolanda Androzzo
Directed by Tasia A. Jones
Featuring Angela Alise 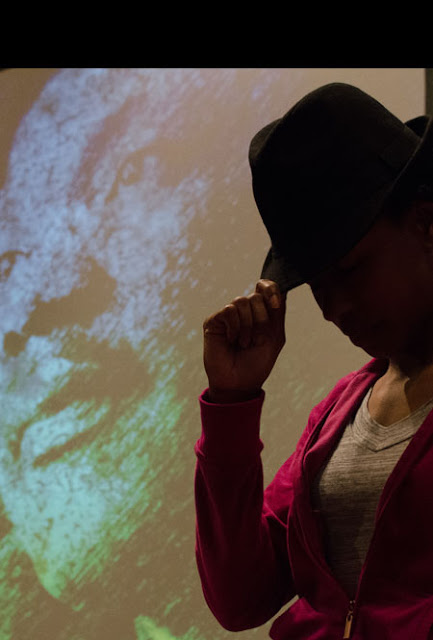 Writers Theatre opens its 13th annual tour of The MLK Project: The Fight for Civil Rights, written by Yolanda Androzzo, directed by Tasia A. Jones and featuring Angela Alise. A special Martin Luther King, Jr. Day public performance will take place at 10:30am on January 21 at the Chicago History Museum, 1601 N Clark Street in Chicago. The kickoff event also includes a post-show community discussion. The event is free and open to the public, and audience members will also receive free museum admission for the remainder of the day.

Weaving together poetry, hip hop and history, The MLK Project: The Fight for Civil Rights is a one-woman show that follows Chicago student Alaya’s personal transformation through studying the Civil Rights Movement. Alaya uses her fists as an outlet for anger. After interviewing local heroes of the Movement, she discovers she can put “anger into action” and that her power is in her voice and her hip hop, not violence.

The 2019 production will tour to more than 35 venues during its 6-week run, including  Chicago Public Schools, community centers, and juvenile detention centers.  All performances on the tour include a post-show discussion and a study guide with wrap-around curriculum.

Writers Theatre will also feature two special onsite performance of The MLK Project on Saturday, February 2nd, 2019 at 4:00pm and 7:00pm. Tickets for this performance are $20 for adults and $10 for students and may be purchased by calling the WT Box Office at 847-242-6000 or https://www.writerstheatre.org/the-mlk-project-the-fight-for-civil-rights.

Write On! a flexible artist-in-residence program customized for each school and group of students. Write On! pairs teaching artists with schools and community organizations in dynamic explorations of performance and text with a focus on encouraging young people to find their creative voices.  Writers Theatre has provided after-school drama programs, in-depth Shakespeare or mythology workshops, ethnographic performance and dramaturgy units, and poetry and writing classes in collaboration with CPS schools, community organizations and juvenile detention centers.

The Novel Series, a cutting-edge theatre and literary arts curriculum designed to allow students to explore literature and the art of bringing text to life. Under the guidance of a Writers Theatre Teaching Artist, students engage in a layered study of a book and enter a rigorous artistic process that merges writing, discussion, and vocabulary with arts-integrated theatre projects. Residencies culminate in a final performance of student-created work as students use voice, body, and imagination to make new and exciting connections to the text.

ACTIVATE is Writers Theatre’s wraparound residency designed to deepen students’ engagement with the art on our stages. Students and teachers involved in ACTIVATE attend an exclusive student-only matinee performance of a play in our season, prepare for and extend their experience at the theatre through in-school pre and post-performance participatory workshops designed to investigate contextual information and the major themes in the play, and participate in a post-show discussion with WT artists and educators.

Writers also began offering Onsite Theatre Classes for young people in Fall 2017. Classes each session will mirror WT’s mission of the word and the artist with creative themes that highlight each of these theatrical tenants created specifically for young artists at the heart of the process. Held in our state-of-the-art theatre center, these customized classes are the perfect way to introduce children to the arts through creative and active collaboration.


All of Writers Theatre’s education programs are aligned with state and national Common Core standards. To learn more visit www.writerstheatre.org/education.

Under the artistic leadership of Michael Halberstam and the executive leadership of Kathryn M. Lipuma, Writers Theatre has grown to become a major Chicagoland cultural destination with a national reputation for excellence, being called the top regional theatre in the nation by The Wall Street Journal. The company, which plays to a sold-out and discerning audience of more than 60,000 patrons each season, has garnered critical praise for the consistent high quality and intimacy of its artistry—providing the finest interpretations of both classic and contemporary theatre in its two intensely intimate venues.