Experience the Magic of Disney’s Beloved Flight of Fantasy: “Peter Pan”
Soars Into the Walt Disney Signature Collection
on Digital May 29 and on Blu-ray™ June 5

Celebrate the 65th anniversary of the timeless classic and enjoy new and original bonus features! 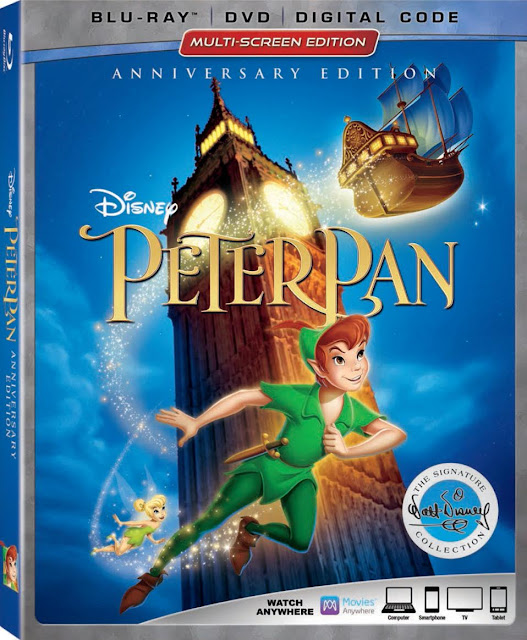 Can you believe the movie about the boy who wouldn't grow up is turning 65?! This story created Wendy as a previously unheard of girls' name, and spawned numerous works of art, film, theatre, and creativity. Now you can bring it home and share it with generations to come.

Discover a ​darling conversation in an all-new clip featuring Wendy (Kathryn Beaumont) and John (Paul Collins) in celebration of the 65th Anniversary​ of Peter Pan! Experience the magic that went into animating the timeless classic with all new bonus content featured on the Peter Pan Walt Disney Signature Collection, now available on Digital and Movies Anywhere and on Blu-ray June 5!​ 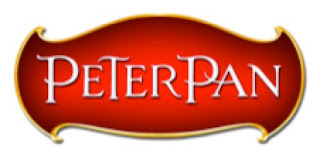 In celebration of its 65th anniversary, Disney’s beloved flight of fantasy, “Peter Pan,” joins the highly celebrated Walt Disney Signature Collection, landing in homes on Digital and  Movies Anywhere on May 29 and on Blu-ray June 5. With a little faith, trust and pixie dust, every member of the family will let their imagination soar on this epic adventure to Never Land, sparkling with legendary animation, extraordinary music and both all-new and classic bonus features.

The Walt Disney Signature Collection edition of “Peter Pan” invites adventures of all ages to believe in magic once again and experience a timeless treasure from Disney’s golden age of animation that has stirred the hearts and imaginations of moviegoers worldwide since its original 1953 release. The Signature Collection edition offers over two hours of classic bonus features plus never-before-seen extras, including the latest installment of “Stories from Walt’s Office,” which explores Walt’s love of flying and the company planes; a nostalgic reunion between Kathryn Beaumont (the voice of Wendy) and Paul Collins (the voice of John); and new “Oke” renditions of the classic song “You Can Fly” and deleted song “Never Smile at a Crocodile” accompanied by on-screen lyrics and the film’s unforgettable animated characters.

In “Peter Pan,” fantastic adventures await the Darling children—Wendy, John and Michael—when Peter Pan, the hero of their stories, whisks them away to the magical world of Never Land.  After flying with Peter and the delightfully impish Tinker Bell past the “second star to the right and straight on till morning,” they explore the enchanted island and Peter’s secret hideout with the Lost Boys, and leap into high-flying battles with swashbuckling pirates and the infamous villain Captain Hook.

“Peter Pan” is the seventh title to join the Walt Disney Signature Collection, which includes groundbreaking films created or inspired by the imagination and legacy of Walt Disney, featuring timeless stories and characters that have touched generations. The film takes its place alongside “Snow White and the Seven Dwarfs,” “Beauty and the Beast,” “Pinocchio,” “Bambi,” “The Lion King” and “Lady and the Tramp.”

BLU-RAY & DIGITAL*:
New Signature Collection Bonus
Stories from Walt’s Office: Walt & Flight – “Think of the happiest things, it’s the same as having wings”. One thing you’ll notice inside Walt Disney’s office are all of the models and pictures of airplanes. Walt loved planes and was an aficionado of flying. As a continuation of the “Stories from Walt’s Office” series, we’ll soar into the world of one of Walt’s favorite pastimes and look at the history behind the company airplane he used to scout Central Florida looking for the perfect place to build his second theme park.

You Can Fly” – A new “Oke” rendition and graphic look of the classic Disney song, “You Can Fly,” with fun lyrics on screen and lots of your favorite “Peter Pan” characters.

Legacy/Classic Bonus
DisneyView
Sing-along Version of the film: Sing along with your favorite songs from the movie.

Growing Up with Nine Old Men – “Peter Pan” is both a story of living with a child’s sense of openness to the world and an acknowledgement that the path to adulthood most often leads away from those qualities. A parallel of sorts to that duality can be found in Walt Disney and his core group of animators, the Nine Old Men, in their lives and in their work. Our short film will look at who they were and the parts they played in one of the most remarkable team of artists that ever worked together.

Backstage Disney
You Can Fly: The Making of ‘Peter Pan’ – A making-of video of the 1953 Disney classic, “Peter Pan.”
In Walt’s Words: “Why I Made ‘Peter Pan’” – Based upon an article written by Walt Disney retold as a dramatic recreation.
Tinker Bell: A Fairy’s Tale – An introspective video on the creation, history and personality of the one and only “Tink.”
The Peter Pan That Almost Was – Hosted by Ron Clements and John Musker, we take a look at the storyboards and early concepts of a version of the “Peter Pan” film that never saw the light of day.
The “Peter Pan” Story – An original featurette for the film created in 1952.

*Bonus features may vary by retailer


ABOUT THE WALT DISNEY SIGNATURE COLLECTION:
The Walt Disney Signature Collection includes groundbreaking films created or inspired by the imagination and legacy of Walt Disney, featuring timeless stories and characters that have touched generations. Each release will offer special features for every member of your family plus a unique digital experience. To date, the collection includes “Snow White and the Seven Dwarfs,” “Beauty and the Beast,” “Pinocchio,” “Bambi”, “The Lion King,” and “Lady and the Tramp.”

ABOUT THE WALT DISNEY STUDIOS:
For over 90 years, The Walt Disney Studios has been the foundation on which The Walt Disney Company was built. Today, the Studio brings quality movies, music and stage plays to consumers throughout the world. Feature films are released under the following banners: Disney, including Walt Disney Animation Studios and Pixar Animation Studios; Disneynature; Marvel Studios; Lucasfilm; and Touchstone Pictures. The Disney Music Group encompasses the Walt Disney Records and Hollywood Records labels, as well as Disney Music Publishing. The Disney Theatrical Group produces and licenses live events, including Disney on Broadway, Disney On Ice and Disney Live!
Posted by Bonnie Kenaz-Mara at 8:46 AM