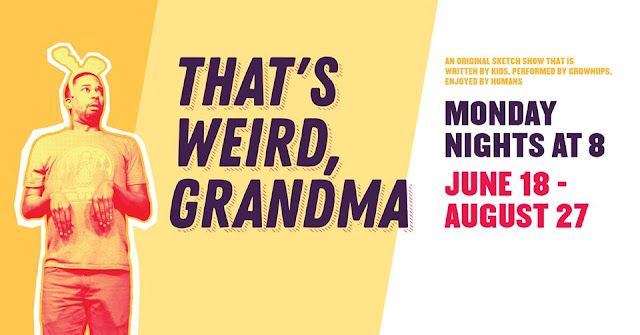 Mad love and belly laughs to one of our long running favorites, Barrel of Monkeys' THAT’S WEIRD, GRANDMA. They've been a Chicago Monday night staple since 1997, with ever changing stories penned by Chicago school kids and brought to life on stage in gut busting glory by professional actors. The 8pm Monday time slot is for other actors, most of whom have an off night after working all weekend. The best thing about BOM's summer run is, you can bring the kids!

Barrel of Monkeys proudly presents THAT’S WEIRD, GRANDMA: Brand New Stories, a line-up of all new stories written by Chicago elementary school students during the 2017-18 school year. Be among the first to experience the newest songs, sketches and dance pieces adapted from stories written by students in Barrel of Monkeys’ creative writing workshops. Directed by Artistic Director Brandon Cloyd, THAT’S WEIRD, GRANDMA: Brand New Stories will play Mondays at 8 pm from June 18 – July 16, 2018 at the Neo-Futurist Theater, 5153 N. Ashland Ave. in Chicago. Tickets are available at www.barrelofmonkeys.org or by calling (773) 506-7140.

Clever and funny – touching and poignant – the collection of stories featured in THAT’S WEIRD, GRANDMA is equally entertaining for adults and children. The line-up of the long-running, critically-acclaimed revue changes each week by audience vote, so no two shows are ever the same.

Barrel of Monkeys, a Chicago-based arts education theater ensemble now in its 21st season, conducts creative writing workshops with 2nd through 7th grade students in underserved Chicago elementary schools and in its own after-school program. The ensemble of actor-educators then turns their stories and poems into professionally performed theater, presented both in-school and for the general public through its revues. Barrel of Monkeys annually performs more than 300 stories for the students in their schools and 175 stories on the stage for the general public.

About the Director
Brandon Cloyd joined Barrel of Monkeys in 2007 and has been deeply involved in many facets of the company ever since. Prior to joining BOM, Brandon graduated from Northwestern University with a Bachelor of Arts in Theatre and a minor in Business Institutions. Within BOM, Brandon has served as an actor, teaching artist, lead teacher, a member of Teacher Corps, as well as a director for schools and public performances of That's Weird, Grandma. Before becoming the company’s Artistic Director in September 2017, Brandon served as BOM After-School Program Coordinator at Loyola Park from 2014-2016 and Program Director from 2016-2017. Outside of Barrel of Monkeys, he worked as the Associate Director of Camp Echo, where he has spent 13 summers managing campers and staff at a co-ed sleep away camp in Upstate New York. Brandon has worked with other theatre companies including Urban Theatre Company, American Theater Company, Filament Theatre, Ingen Productions, ACLE's Teatrino in Italy and Purple Crayon Players at Northwestern University.

Barrel of Monkeys is sponsored in part by Wintrust Financial, Allscripts, Inc., Ernst and Young and Punchkick Interactive. It receives generous support from the Illinois Arts Council Agency; the National Endowment for the Arts; a CityArts Grant from the City of Chicago Department of Cultural Affairs and Special Events; the Chicago Community Trust; Crown Family Philanthropies; Alphawood Foundation of Chicago; the Maurice R. and Meta G. Gross Foundation; Polk Bros Foundation; the Richard H. Driehaus Foundation; the Robert and Isabelle Bass Foundation, Inc.; The Saints; The Topfer Family Foundation, and many other generous individuals and foundations.
Posted by Bonnie Kenaz-Mara at 5:17 PM