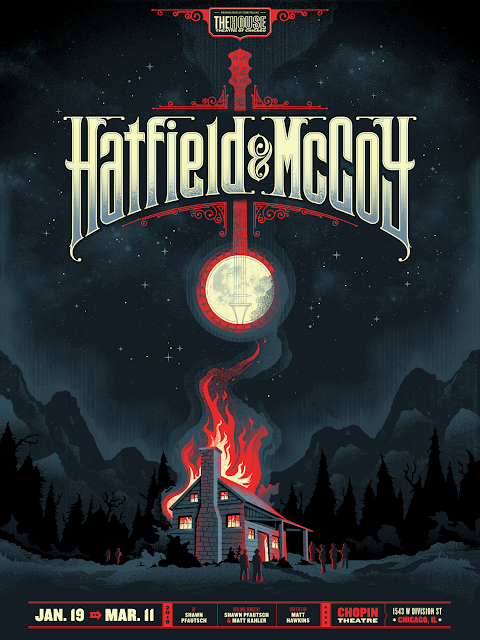 This All-New Production of Hatfield & McCoy Now Features a Rich Score of Americana Music Spanning Bluegrass, Folk, Rock, and Pop. In an Homage to Romeo and Juliet, Political Divides Drive a Cycle of Violence Between Two Families

Here at ChiIL Mama and ChiIL Live Shows we're banjo thumpin' stoked to check out this original production! House Theatre has long been a top favorite of ours and we particularly adore the productions they write in house. I'll be out with my husband and teens for the press opening on Sunday, Jan. 28th, so check back soon for my full review.

The performance schedule is Thursdays and Fridays at 7:30 p.m., Saturdays at 3 and 8 p.m. and Sundays at 3 p.m. Preview tickets are $20 and regular run tickets range from $30 – $50. Same-day tickets for students and industry professionals are $20 and available for all dates, seats permitting. For more information and to purchase tickets, please visit www.thehousetheatre.com or call 773.769.3832.

Two of our lucky readers will WIN a pair of tickets ($80 value/2 pairs).
Good for winners' choice of any shows between 2/1 and 2/11 pending availability. Enter through midnight Monday, January 29th.

ENTER HERE for your chance to WIN

On the border of Kentucky and West Virginia, North and South, fact and fiction, two cabins both alike in dignity wage a whip-smart war of words and bullets. Hatfield & McCoy tells the true tale of the most infamous family feud in American history. Set at the close of the Civil War, a battle of Us versus Them catches two young lovers in a deadly cycle of violence.

Gunfire and romance escalate when young Rose Anna McCoy and Johnse Hatfield fall in love, marry in secret, and vow to reconcile their feuding families. Their tale of woe is served up with a heaping helping of original Americana tunes, connecting their past to our present.

Hatfield & McCoy received its world premiere at The House in 2006. Workshops for the 2018 production were supported by University of Chicago’s UChicago Performance Lab. 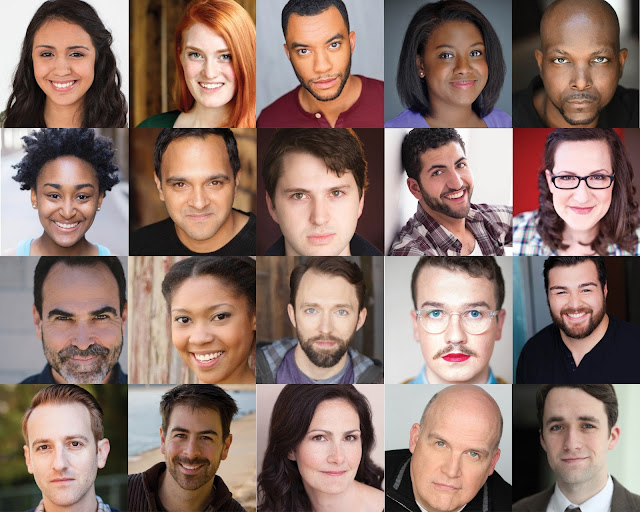 ABOUT SHAWN PFAUTSCH, Playwright, Co-Composer
Pfautsch is a playwright, musician, actor and a veteran company member of The House Theatre of Chicago, enlisting from the very beginning in 2000. His full-length plays, Season on the Line, The Attempters, and Hatfield & McCoy have all received their world premieres with The House. As an actor, he has been on stage around Chicago at: The House (Death & Harry Houdini, Cyrano, Thieves Like Us) Steppenwolf (Theatrical Essays), Chicago Children’s Theatre (A Year with Frog and Toad, Frederick), and The Hypocrites (Gilbert & Sullivan Rep). As part of The Hypocrites’ Gilbert & Sullivan rep, he has performed around the country, from Boston to Berkeley, Louisville and the DC area and most recently in New York City (Skirball Center at NYU) and Pasadena Playhouse. His short plays and one-acts have been produced in Chicago as well as Texas, Florida and Iowa.

ABOUT MATT HAWKINS, director
Hawkins is a Chicago-based director, actor, fight choreographer and movement director.  He is a Founding Member of The House Theatre of Chicago and an Artistic Associate with Strawdog Theatre Company.  Over the past fifteen years he has worked with theatres such as the Royal Shakespeare Company, Stratford Festival, Kennedy Center, South Coast Rep, American Players’ Theatre, Drury Lane, Marriott, Paramount, Steppenwolf, Goodman, Lookingglass, Court Theatre and Writers Theatre. He has also worked extensively with Chicago Shakespeare and their education department, by serving as the director and voice/movement director of the Chicago Public Schools program, which was the recipient of the Humanities Youth Program Award in 2014, awarded by The White House and First Lady Michelle Obama.  He holds a BFA in acting from Southern Methodist University and an MFA in directing from The University of Iowa.  He has been nominated for thirteen Jeff Awards and has received five. Later this year he will direct and choreograph Spring Awakening (Notre Dame) and choreograph violence for Macbeth (Chicago Shakespeare). He is currently an Assistant Professor at the University of Notre Dame, where he serves as head of musical theatre for the Department of Film, Television, and Theatre.  He is married to actor/director/documentarian Stacy Stoltz.

The House was founded in 2001 by a group of friends to explore connections between Community and Storytelling through a unique theatrical experience. Since becoming eligible in 2004, The House has been nominated for 70 Joseph Jefferson Awards (22 wins), became the first recipient of Broadway in Chicago’s Emerging Theater Award in 2007, and was awarded a

2014 National Theatre Company Grant by the American Theatre Wing, founder of the Tony Awards. The 16th year of original work is underway and The House continues its mission to unite Chicago in the spirit of Community through amazing feats of Storytelling.