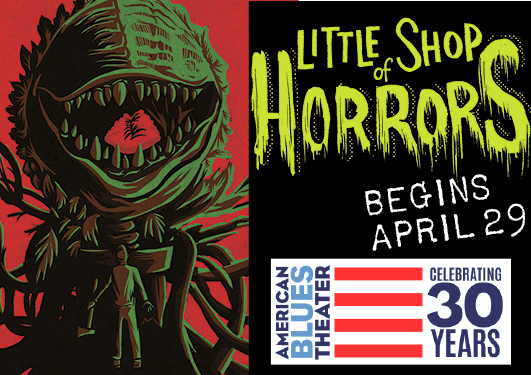 Here at ChiIL Mama, this is one of our favorite musicals and we can't wait to see the talented team at American Blues Theater's take on it. Don't delay on booking your tickets. They're selling crazy fast and the show's been extended already, before previews have even started! Don't miss this.

Due to early ticket demand, American Blues Theater announces the extension of Little Shop of Horrors, the comedic rock musical with book and lyrics by Howard Ashman, music by Alan Menken, directed by Jonathan Berry, and music direction by Ensemble member Austin Cook. Little Shop of Horrors now runs April 29 – June 26, 2016 at the Greenhouse Theater Center, 2257 N. Lincoln Ave. in Chicago.  The official press opening is Friday, May 6 at 7:30 pm. Tickets to Little Shop of Horrors, including the extension performances are currently on sale and can be purchased by phone at 773-404-7336 or online at www.americanbluestheater.com.

For years, Little Shop of Horrors has made audiences scream with laughter. In this gleefully gruesome musical, Seymour, a poor florist’s assistant, allows his craving for fame and fortune to seduce him into playing nursemaid to a man-eating plant. This celebrated musical, with book and lyrics by Howard Ashman and music by Alan Menken, features the rock and roll, doo-wop and early Motown-inspired songs “Skid Row (Downtown),” “Somewhere That’s Green,” and “Suddenly, Seymour.”

The multi-generational and interdisciplined artists have established the second-oldest professional Equity Ensemble theater in Chicago.  The 34-member Ensemble have over 500 combined years of collaboration on stage. As of 2016, the theater and artists received 172 Joseph Jefferson Awards and nominations that celebrate excellence in Chicago theater and over 28 Black Theatre Alliance Awards. The artists are honored with Pulitzer Prize nominations, Academy Awards, Golden Globe Awards, Emmy Awards and numerous other accolades.