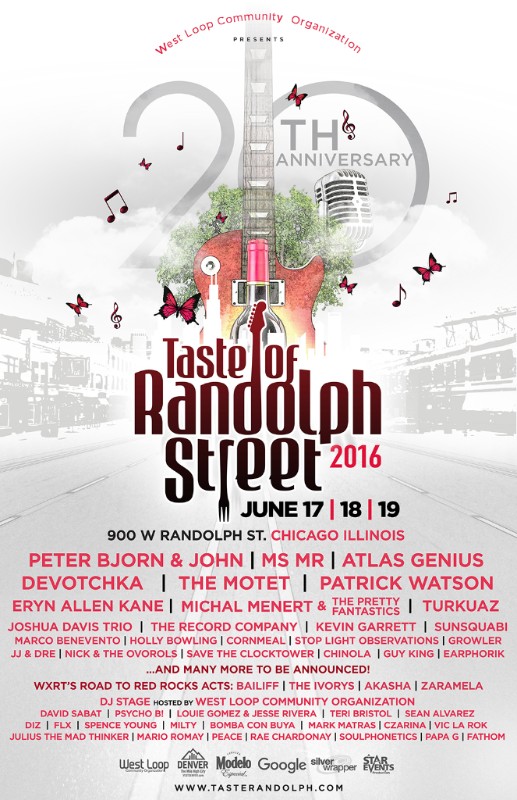 Here at ChiIL Live Shows, we're particularly jazzed that the 20th Anniversary of Taste Of Randolph this summer will include a Red Rocks Stage! We've been to Red Rocks and it's one of the most breathtaking venues in the entire country. We're also pretty stoked a couple of our favorite Chicago bands, Akasha and Bailiff, are slated to grace the Red Rocks Stage in the WXRT “Road to Red Rocks” show, competing to win a chance to perform at the real Red Rocks Amphitheater in July! Don't miss this.

To celebrate Taste of Randolph's 20th Anniversary, the iconic street festival has teamed up with VISIT DENVER, The Convention & Visitors Bureau in Denver, CO to construct the Denver Live on the Rocks stage – a scale replica of the legendary Red Rocks Amphitheater, itself celebrating its 75th Anniversary this year. The stage will feature national headliners who originated in Colorado as well as daily chances for festival attendees to win an all-expense paid trip to Denver, including tickets to a concert at Red Rocks.

On Sunday, June 19, four local Chicago bands - Zaramela, Akasha, Bailiff, The Ivorys - will play the WXRT “Road to Red Rocks”  show, on the Denver Live on the Rocks Stage, to win a chance to perform at the real Red Rocks Amphitheater in July. The two wings of the scale reproduction will each stand some 70 feet long and 30 feet high, and will be hand-sculpted and hand-painted to mimic the venue’s iconic monoliths and red sandstone striations.

Commemorating the iconic street festival's 20th Anniversary, StarEvents and WLCO brings together the biggest and brightest names in Chicago dining, featuring over 20 restaurants exemplary for delectable menus and irresistibly unique flavors. Taste of Randolph features a musical lineup of legendary headliners and rising stars, as well as the biggest names in Chicago house music, performing on two stages and a DJ stage, to entertain guests on their culinary adventure.

StarEvents: For 20 years Star Events has been producing captivating events and festivals celebrating the best food, music, and culture Chicago has to offer. Dedicated to Chicago citizens and their communities - Star Events has generated over 10 million dollars for Chicago neighborhoods, charities, and non-for-profits.

Silver Wrapper: With 15 years of producing and organizing club shows, concerts and festivals under their belt, Silver Wrapper has established themselves as Chicago's preeminent fan and artist first independent concert promoter. The Silver Wrapper team is grateful for the continued growth within their organization & live music community, and are proud to recognize “It's not a party with out the people!”, over and over again.

Red Rocks: Recognized for its star-studded concert roster and ambience, Red Rocks Amphitheater is the only naturally-occurring, acoustically perfect amphitheater in the world; and 2016 marks the venue’s 75th Anniversary. The Denver Live on the Rocks Stage will be a scale model of the awe-inspiring site, and some of Colorado’s best visual artists will hand carve and paint the 30 foot tall, 70 foot long replicas of the two monoliths that form the original amphitheater.

History: For nearly two decades, Taste of Randolph Street Festival has provided some of Chicago’s best restaurants with an unparalleled opportunity to show of their greatest dishes to the city’s hungry masses.
Location: 900 W. Randolph St. Peoria, Chicago.
Music: National and Local acts ranging from Rock to Dance.


Entrance: A $10 donation is suggested for admission to benefit the West Loop Community Organization, where residents, visitors and businesses have an active voice in decisions affecting the neighborhood parks, development, schools, traffic, safety and more.

StarEvents, the West Loop Community Organization, and Silver Wrapper have shared the Music and Restaurant Lineup for Taste of Randolph Festival 2016.
Posted by Bonnie Kenaz-Mara at 12:37 PM