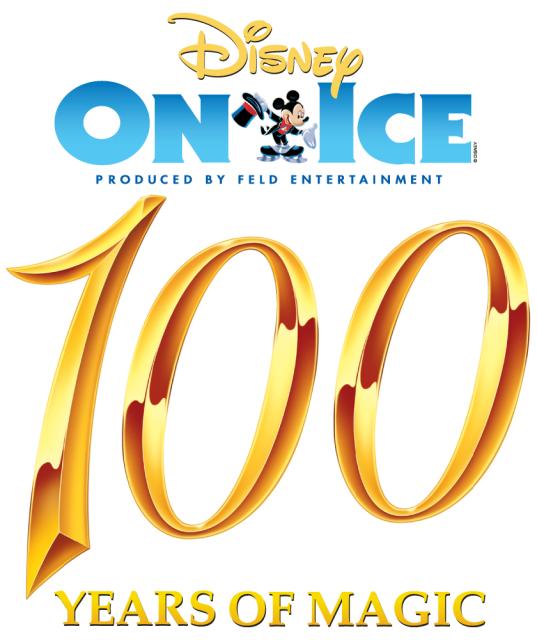 *Disclaimer:   Thanks to Feld for providing tickets for our giveaways and our family.

Guess who's turning triple digits?!  And you're invited to help celebrate!

ChiIL out with ChiIL Mama and a cool discount for our readers when you use the code MOM!   Save 40% on all weekday shows and Save 20% on all weekend shows.   Click here to order tickets.

Disclaimer:  Weekday is defined as any show Monday through Thursday or Friday matinee, not including holidays such as the day after Thanksgiving. Discount does not apply to Circus Celebrity, Front Row, or VIP seats. No double discounts. Service charges, handling, and facility fees may apply.

We've partnered up with Feld for years, to cover Disney on Ice, Monster Jam, Ringling Brothers Barnum and Bailey Circus and more, and we are excited to again be back for the 2013-14 season!

First up... Chi, IL can ChiIL out with the coolest characters on ICE. 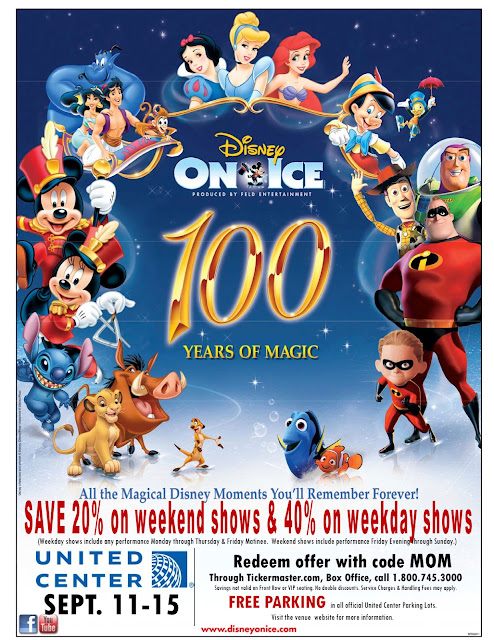 Enter here for your chance to WIN up to 6 tickets!

Click the Rafflecopter link below for your shot at a family pack of FREE tickets (up to 6) for your choice of the 7pm show on either 9/11 or 12.   Adjoining seats are available for purchase if your family is larger.   Entry is open through midnight Labor Day 9/2/13.

Mickey Mouse, Minnie Mouse and their friends from Disney’s Mulan, The Lion King and Pinocchio, and Disney/Pixar’s Finding Nemo, The Incredibles and Toy Story, will take to the ice for a grand celebration in Disney On Ice celebrates 100 Years of Magic, Sep. 11-15, at the United Center.

Outfitting this cast of more than 60 characters was the challenge facing Costume Designer Scott Lane. His dazzling designs range from Mickey’s Marching Band, to the “It’s a Small World” dolls, to the stars of Mulan and Finding Nemo. The bright colors and minimal structure in the Nemo costumes allow the characters to move freely in order to mimic the natural movement in water.  Renowned designer Bob Mackie also lends his talents to a red sequined evening gown worn by Minnie.

Scenic Designer David Potts, who has worked on numerous Broadway productions, creates a theatrical atmosphere on ice. Skaters weave around and enliven the “It's a Small World” sequence amidst sparkling floats that turn into a radiant light parade; a blanket of snow and an avalanche fall as Mulan battles the Huns; and a giant present is opened to reveal Buzz Lightyear as he’s first introduced to that f

Scenic Designer David Potts, who has worked on numerous Broadway productions, creates a theatrical atmosphere on ice. Skaters weave around and enliven the “It's a Small World” sequence amidst sparkling floats that turn into a radiant light parade; a blanket of snow and an avalanche fall as Mulan battles the Huns; and a giant present is opened to reveal Buzz Lightyear as he’s first introduced to that favorite toy cowboy, Woody and his pal Jessie.

United Center performances of Disney On Ice celebrates 100 Years of Magic are scheduled for 7 p.m., nightly, Wednesday, Sep. 11, through Sunday, Sep. 15. Additional performances will be held at 11:30 a.m. and 3:30 p.m. on Saturday and Sunday. The Sunday 7 p.m. show will be performed in Spanish.

*Disclaimer:   Thanks again to Feld for providing tickets/swag for our giveaways and our family.   Check back like we vote in Chi, IL... early and often, for LOTS more great giveaways!