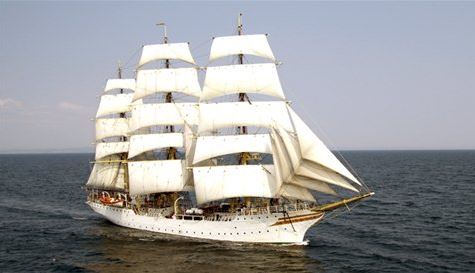 An 86-year-old Norwegian Tall Ship, the SS Sørlandet, will make its second visit to Chicago in August. Built in 1927, the ship crossed the Atlantic in 1933 to represent Norway during Chicago's Century of Progress Exposition.

Considered the oldest full-rigged ship still in operation, the Sørlandet will be docked at Navy Pier from Thursday through Sunday, Aug. 8 to 11, as part of the Great Lakes Tall Ships Challenge that began in June. It is the largest of the 15 participating ships that will be moored at the pier.

To learn more about the Norwegian ship click here. For more information about the Tall Ships and ticket prices (including Sail Away Cruises), visit Navy Pier's website.
Posted by Bonnie Kenaz-Mara at 10:47 AM