Happy 448th Birthday to the bard!

Today (Monday, April 23rd) is annual talk like Shakespeare day.
Talk Like Shakespeare Day, an occasion for citizens from Chicago and across the globe to celebrate Shakespeare's 448th birthday by bringing the spoken words of Shakespeare into their daily lives. The holiday, which originated in Chicago in 2009, became a worldwide sensation garnering extensive national and international media coverage and more than one million hits to TalkLikeShakespeare.org.
Celebrate by seeing Being Shakespeare:

ChiIL Live Shows had a chance to catch opening night of Simon Callow's show, and we recommend it.   Callow's strong stage presence among minimalist sets enhances the infamous words of the bard, interspersed with his life history.   Although much of the historical data he includes on Shakespeare's life is speculation, it's fascinating nonetheless to put the plays within a time frame of his life and outside influences.

Tales of child deaths that plagued his birth family, and later the death of his own son, Hamnet, at age 11, lend a human air and compelling back story.   As the parent of an 11 year old son, that particularly struck a chord with me.   Since we've been doing a long form exploration on how theatre people, musicians and other creatives balance their work and parenting, and how the two worlds collide and influence each other, this was an interesting angle.   Simon Callow is a talented tale teller and a joy to spend an evening with.   The British film and stage actor is know for his roles in Shakespeare in Love, Four Weddings and a Funeral, Postcards from the Edge, A Room With a View and Amadeus.

*Tonight only, celebrated British actor Simon Callow's one-man show, Being Shakespeare will play a special Monday performance at the Broadway Playhouse, preceded by a birthday party for the Bard in the theater's lobby beginning at 5:30 p.m. 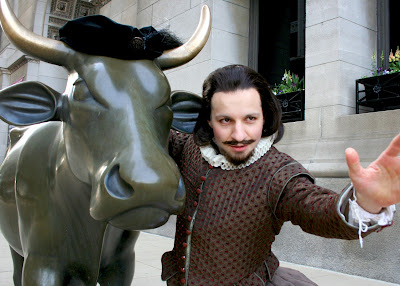 According to Shakespeare-Online.com, The English language owes a great debt to Shakespeare. He invented over 1700 of our common words by changing nouns into verbs, changing verbs into adjectives, connecting words never before used together, adding prefixes and suffixes, and devising words wholly original.

Below is a list of a few of the words Shakespeare coined, hyperlinked to the play and scene from which it comes. When the word appears in multiple plays, the link will take you to the play in which it first appears.


Incorporate these down to earth words for Talk Like Shakespeare Day, then click the links to see the source:


This graph can be found at http://www.shakespeare-online.com/biography/wordsinvented.html

Other Chi-Town Talk Like Shakespeare Contests and specials:
Shakespeare is being celebrated around the world this week, from Chicago to London to Armenia, in recognition of the man who engineered more than 154 sonnets, 37 plays, 1,700 original words and innumerable phrases. On April 23 Shakespeare's Globe Theatre in London will launch its Globe to Globe Festival, part of London's Cultural Olympiad, beginning a two month international event presenting all 37 plays from Shakespeare's canon in 37 different languages (including Chicago Shakespeare's Othello: The Remix, The Q Brothers' hip-hop adaptation of Othello, opening in London May 5).

Talk Like Shakespeare Day has even sparked a movement, originating in Armenia, lobbying for the inclusion of "Shakespearean" alongside "Pirate" and "Upside Down" as an official language option on Facebook.

Chicago Shakespeare Theater, 2008 recipient of the Regional Theatre Tony Award, will be talking like Shakespeare throughout the upcoming birthday week. On the morning of April 23, Chicago Shakespeare's production of The Taming of the Shrew will be performed for Chicago Public School students at Sawyer Elementary School on the City's south side.

At Chicago Shakespeare's home on Navy Pier, Artistic Director Barbara Gaines and Tony-award winning actor Ian McDiarmid begin preview performances of Timon of Athens, while the cast of Othello: The Remix prepares for the world premiere of its new work in London the following week.    ChiIL Live Shows will be there to review opening night of Timon of Athens as well. 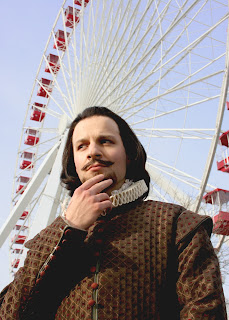 Photo courtesy of Chicago Shakespeare Theater. "William Shakespeare" (portrayed by David Wilhelm) celebrates his 448th Birthday on Monday, April 23, 2012 in Chicago, as part of "Talk Like Shakespeare Day" by taking in some of Chicago's best-known landmarks including the Ferris Wheel on Navy Pier. 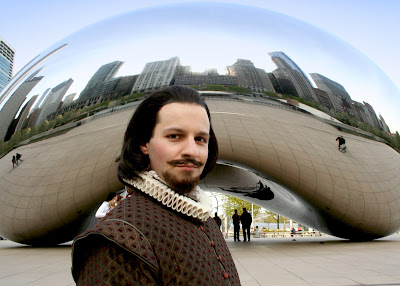 "William Shakespeare" (portrayed by David Wilhelm) celebrates his 448th Birthday on Monday, April 23, 2012 in Chicago, as part of "Talk Like Shakespeare Day" by taking in some of Chicago's best-known landmarks including Cloud Gate in Millennium Park and the bull statue at the Chicago Cultural Center.
Posted by Bonnie Kenaz-Mara at 9:00 AM