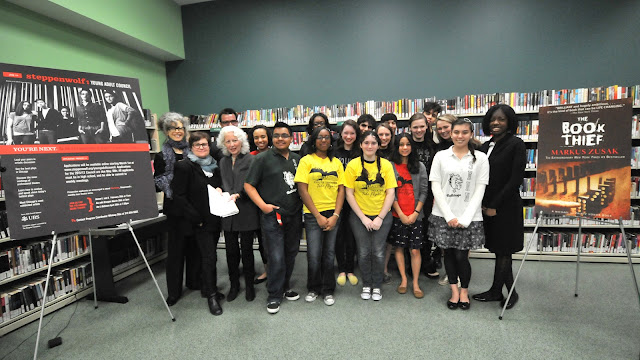 This morning, heads of Steppenwolf Theatre Company, Chicago Public Library and Facing History and Ourselves announced Now Is The Time, a season-long initiative to inspire a citywide conversation about making positive change in our communities to stop the trend of youth violence and intolerance.  The above photo is from this morning’s press conference.
CHICAGO PUBLIC LIBRARY, FACING HISTORY AND OURSELVES,
AND STEPPENWOLF THEATRE COMPANY ANNOUNCE NOW IS THE TIME

THREE CHICAGO INSTITUTIONS UNITE ARTISTS AND YOUTH IN A SEASON-LONG,
CITYWIDE CALL TO ACTION AGAINST YOUTH VIOLENCE AND INTOLERANCE

Heads of the Chicago Public Library, Facing History and Ourselves and Steppenwolf Theatre Company announced today a season-long initiative to inspire a citywide conversation about making positive change in our communities to stop the trend of youth violence and intolerance. These three Chicago institutions have joined forces for Now Is The Time (NITT), a themed initiative throughout 2012/13 linking major projects at each institution, including the Fall 2012 One Book, One Chicago selection, Markus Zusak’s The Book Thief, a staged adaptation of Zusak’s book at Steppenwolf Theatre Company, and a major Facing History and Ourselves exhibit titled “Choosing to Participate.” 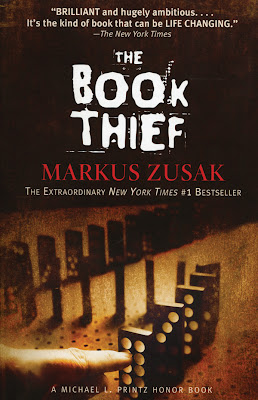 Each institution, through these major projects and under the Now Is The Time umbrella, will focus outreach and programming on questions of social activism and civic responsibility, particularly among Chicago’s youth. Also engaging in related programming will be DePaul University students and more than 15 Chicago-area theater companies, along with additional organizations to be announced later. The citywide project was announced during a press conference this morning at the Chicago Public Library.

“Violence involving young people has become all too common in our society,” said Mayor Rahm Emanuel.  “It’s time for all of us, in every community, to come together to talk about ways to resolve our differences without violence and how to treat each other with respect.  I applaud these three institutions and the funders of this initiative for creating the space for us to do just that, especially with our young adults.”

“In recent years, violence towards youth has become overwhelming. As theater artists working in schools, the teens we work closely with in the classroom are scared to be outside in their neighborhoods or face torment at school from bullying,” commented Hallie Gordon, Artistic and Educational Director, Steppenwolf for Young Adults. “As artists, we have a unique opportunity to help teens give voice to this epidemic. We encourage our civic partners and other cultural organizations to join us—now is the time.”

The initial roster of Now Is The Time projects includes:
August 27 – November 11, 2012: Facing History and Ourselves brings the powerful multimedia exhibit Choosing to Participate to the Chicago Public Library’s Harold Washington Library Center. This free exhibit encourages young people to recognize the importance of a democratic society through installations about people whose stories illustrate courage, initiative and compassion—including a display about local unsung heroes making a difference in Chicago.

Summer 2012 – Winter 2013: YOUmedia, a teen learning space housed at the Chicago Public Library, will use the themes of NITT for workshops on digital media creation, developing teens’ skills in critical thinking, creativity and tangible digital media skills, all the while engaging them in this conversation on civic responsibility.

October 2012: Markus Zusak’s The Book Thief is the Fall 2012 selection for One Book, One Chicago. The award-winning 2006 novel explores young people’s choices and their potential as civic participants. The author will visit the Chicago Public Library and participate in events with the public, with teachers and librarians, and with high school students.

October 16 – November 11, 2012: In Fall 2012, Steppenwolf Theatre Company will produce a stage adaptation of The Book Thief, adapted by Heidi Stillman, directed by Hallie Gordon, as part of the theater’s Steppenwolf for Young Adults program, combining play production with educational components to enhance arts education for young audiences, as well as their teachers and families.

February – March 2013: Oral histories about youth violence, collected from across the city by DePaul University students, will be used to create a play at Steppenwolf, curated by Professor Miles Harvey. Traveling to libraries in different communities across the city, each reading will be followed by a teen-led workshop.

“One Book, One Chicago has a 10 year history of bringing together Chicagoans of diverse backgrounds to discuss issues around a specific piece of literature.  While The Book Thief is set 70 years ago, sadly the topics it addresses are very much alive today:  intolerance and violence.  Now Is The Time offers all of Chicago a wonderful opportunity to create, as the Dalai Lama recently called for, ‘a century of dialogue.’  The Library is proud to partner with Steppenwolf Theatre Company and Facing History and Ourselves to start that conversation,” said Chicago Public Library Commissioner Brian Bannon.

"Facing History and Ourselves is thrilled to bring an exhibit to Chicago that examines the impact of racism and injustice and the consequences of choices we make every day to help build inclusive or exclusive communities,” said Bonnie Oberman, Chicago director of Facing History and Ourselves. “We know that the privilege of partnering with the Chicago Public Library and the Steppenwolf Theatre means that thousands of Chicagoans will have access to a citywide conversation around issues critically important to all of us."

The goal of Now Is The Time is to spur youth activism and creative self-expression around the themes of social responsibility and civic engagement. Youth involved in NITT will participate in skill-building around their interests such as design, spoken word, music, film, writing, performance and digital media creation which they can share with fellow citizens via the Now Is The Time website. Participating youth will be better prepared for the demands of citizenship by being supported to think critically, to empathize, to recognize moral choices, and to make their voices heard.

Now Is The Time provides ample opportunities for additional program partners, large and small, from around the Chicago area. Throughout 2012/13, NITT’s call to action will inspire themed activities from organizations engaged in theater arts, youth work, digital media, education; participants connect via the NITT website, nowisthetimechicago.org.

Now Is The Time is funded by the Hive Learning Network, an initiative of the John D. and Catherine T. MacArthur Foundation; and the Smart Chicago Collaborative fund of the Chicago Community Trust.

Facing History and Ourselves is a leader in history and civic education. For more than 35 years, the international education organization has been linking the past to the moral and ethical questions of our time through a rigorous examination of the root causes of antisemitism, racism, and other hatreds. The overarching goal is to help young people understand the importance of their choices in building a just, inclusive society and to empower them to be active, informed, compassionate citizens in their schools and communities. Facing History's quality resources, professional development, and public forums provide opportunities for students and adults to explore the connections between history and their own lives. Facing History reaches 1.9 million students each year through a network of 50,000 educators. In 2009, the Facing History and Ourselves website received more than 700,000 visits from people in 215 countries, with 2.6 million page views. The Chicago office of Facing History and Ourselves celebrated its 20th Anniversary in 2010. More information is available at facinghistory.org.

Steppenwolf Theatre Company is one of the nation’s leading ensemble theaters, producing annually up to 16 productions and nearly 700 performances, readings and other events in its three Chicago theater spaces—the 515-seat Downstairs Theatre, the 299-seat Upstairs Theatre and the 80-seat Garage Theatre. Formed in 1976 by a collective of actors, Steppenwolf has grown into an ensemble of 43 actors, writers and directors. Artistic programming at Steppenwolf includes a five-play Subscription Season, a two-play Steppenwolf for Young Adults season and three repertory series: First Look Repertory of New Work, Garage Rep and Next Up. While firmly grounded in the Chicago community that has been its home for 36 years, nearly 40 original Steppenwolf productions have enjoyed success both nationally and internationally, including Off-Broadway, Broadway, London, Sydney and Dublin. Steppenwolf has the distinction of being the only theater to receive the National Medal of Arts, in addition to numerous other prestigious honors including a Pulitzer Prize for ensemble member Tracy Letts’ August: Osage County, an Illinois Arts Legend Award and nine Tony Awards. Martha Lavey is the Artistic Director and David Hawkanson is the Executive Director. Nora Daley is Chair of Steppenwolf’s Board of Trustees. For additional information, visit steppenwolf.org, facebook.com/steppenwolftheatre and twitter.com/steppenwolfthtr.
Posted by Bonnie Kenaz-Mara at 1:35 PM