ADULT NIGHT OUT: Chicago Premiere of BIRDS OF A FEATHER Via Greenhouse Theater Center 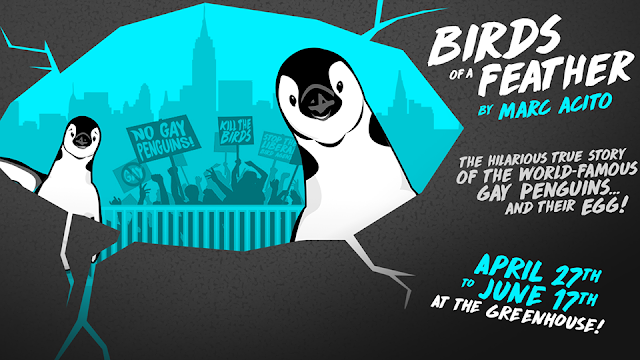 ChiIL Mama will be ChiILin' at Greenhouse Theater Center for the press opening of BIRDS OF A FEATHER on April 30th. We embrace all types of families here, and love banned books. We also can't wait to check out Marc Acito’s touching and humorous play BIRDS OF A FEATHER, directed by Artistic Director Jacob Harvey. Based on one of America’s most banned books, Acito’s hit comedy brings to life the story of the Central Park Zoo’s gay penguins to tell a truly hilarious human story. Check back soon for my full review. 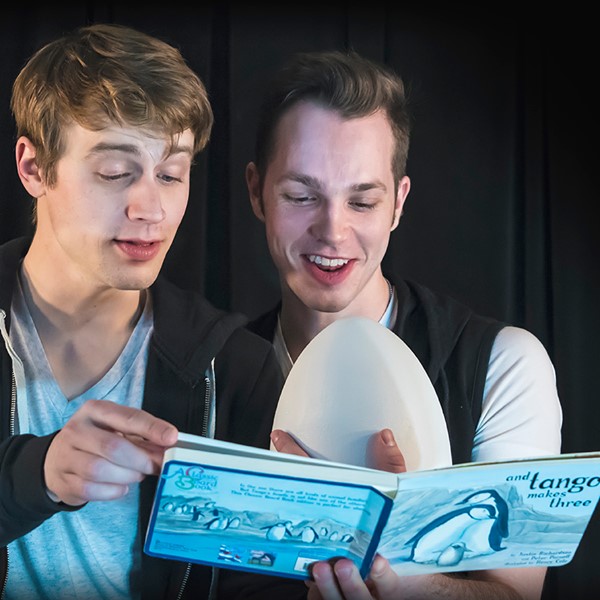 It takes two to Tango. Roy and Silo are your typical gay American dads with one noticeable exception: they’re penguins! No strangers to the spotlight, these two Central Park Zoo chinstrap penguins have partnered and adopted an egg, but will they be able to raise little Tango together? BIRDS OF A FEATHER is a heartwarming and surprising tale, based on the true story that became one of the most banned books in the U.S.

“Birds of a Feather is a play that at its core explores the most complex, contrary, and difficult animals to predict: human beings,” comment director Jacob Harvey. “Actio does something brilliant in this piece as he employs fun and feathers to allow us insight into our own bird-brained existence.”

Educational Partnership with North Central College
BIRDS OF A FEATHER will be presented through an educational partnership with North Central College, allowing students to shadow professional actors as the production’s understudy cast. Students will be immersed in every facet of the production, serving not only as understudies but as assistant designers and assisting members of the production team, in a program that serves as an extension of classroom work and a springboard into the Chicago theatre community. The student understudy cast will have two guaranteed performances at the Greenhouse, one for a high school audience and one for the public. A NCC student will also shadow the stage manager. 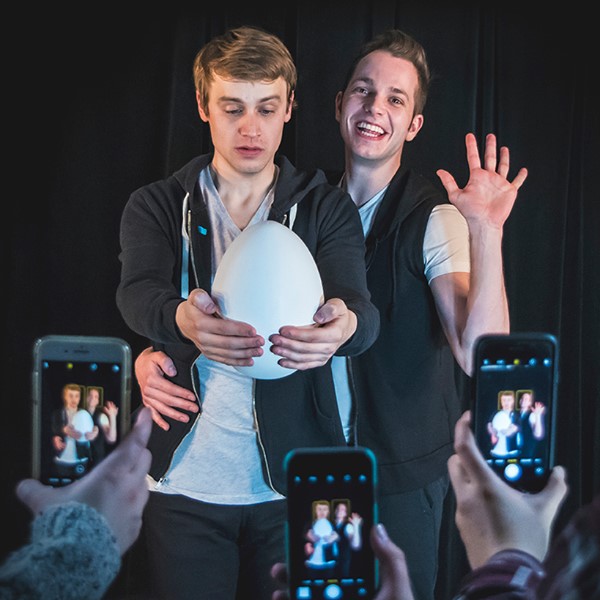 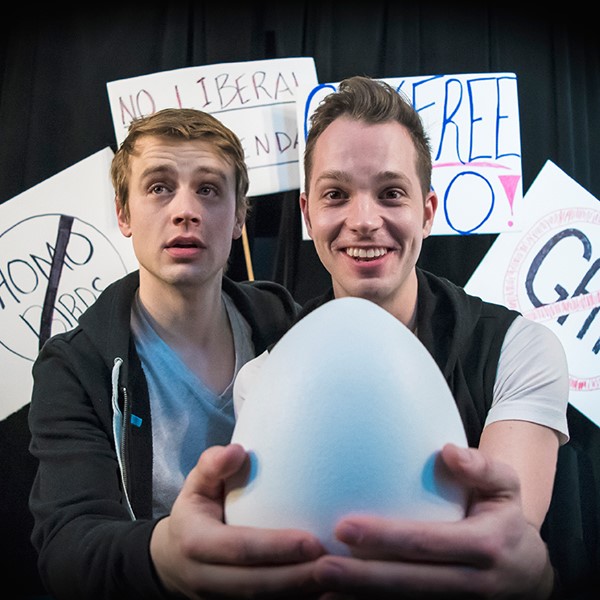 About The Artists
Marc Acito (Playwright) wrote the book of the Broadway musical Allegiance, which New York Newsday recognized for its “well-structured book” and “fully developed characters.” Acito’s comedy Birds of a Feather won Washington D.C.’s Helen Hayes Award for Best New Play. He won the Ken Kesey award for his novel How I Paid for College, which he adapted as a one-man musical starring Alex Brightman. Other projects include A Room with a View (Old Globe and 5th Avenue Theaters), Chasing Rainbows, about the adolescence of Judy Garland (Goodspeed Musicals) and It’s a Secret, a musical in Mandarin for Broadway Asia in China. This June, he’ll direct his rock musical comedy Bastard Jones at the cell theatre in New York. A former commentator on NPR’s All Things Considered, Acito now writes regularly for Playbill and teaches Musical Theater History and Story Structure at NYU. He’s a proud member of the Dramatists Guild, MENSA and Weight Watchers.

Jacob Harvey (Director) is the Artistic Director of Chicago's Greenhouse Theater Center (GTC), beginning his tenure by launching the organization’s producing arm with the Solo Celebration, a series of 16 solo plays and events over eight months. He also contributed to the series as a director, helming the Chicago premiere of Circumference of a Squirrel, as well as the co-production I Do Today (The Other Theater Company). Jacob is also the director of GTC's recent hit production of Machinal, which was award four (out of four) stars by Chris Jones of the Chicago Tribune and named one of the top ten productions of 2017.  Locally, he has taught for American Theatre Company’s Bridge Program, and was named one of Newcity’s “Players 2017.” A freelance director, teaching artist and producer, Harvey was awarded the Bret C. Harte Director/Producer Fellowship for Berkeley Repertory Theatre’s 2013/14 Season; served as Associate Producer and Interim Director of Programming for the Drama Desk Award Winning New York Musical Theatre Festival (NYMF); and served as the Co-Artistic Director of the Ovation Award-Nominated Mechanicals Theatre Group in Los Angeles. He is also a Producer for Your Theatrics International, a full service entertainment production company, specializing in the production of theatrical events around the world. With a fervent passion for developing new musicals, he was the Co-Producer of Ladyhawks (NYMF 2013 Best of Fest under the title Volleygirls) and the Associate Producer of Ryan Scott Oliver’s 35MM: A Musical Exhibition. Other regional directing credits include, Mr. Marmalade (The Theatricians), The Shape of Things (Silver Bell Productions), the world premiere of the new musical The Many Selves of Mia Scott (Carrie Hamilton Theater) and assistant director of the world premiere of Marcus Gardley’s The House The Will Not Stand (Berkeley Repertory Theatre). He is also the creator of the upcoming musical web series currently in development, The Cycle. Jacob attended the BFA program at Marymount Manhattan College and is a graduate of The Los Angeles County High School for the Arts. 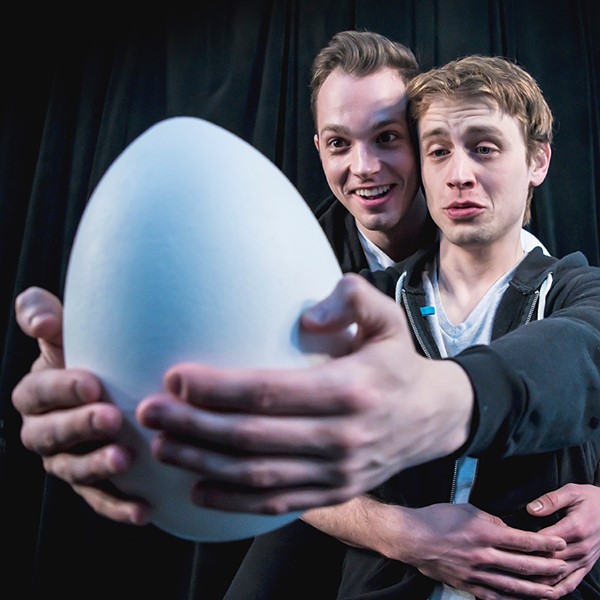 The Greenhouse Theater began its producing life in 2014 with the smash hit Churchill, after which came 2016’s much-lauded Solo Celebration!, an eight month, 16 event series highlighting the breadth and depth of the solo play form. This year, the Greenhouse announced a full subscription season, with a mix of multi-character and solo plays. With a focus on our community, the Greenhouse has also launched the Trellis Residency Initiative, an initiative designed to cultivate the next generation of Chicago theatre creators, as well as the MC-10, an ensemble of mid-career playwrights whose works will be included in future Greenhouse programming.

As a performance venue, our complex offers two newly remodeled 190-seat main stage spaces, two 60-seat studio theaters, two high-capacity lobbies and an in-house rehearsal room. We strive to cultivate a fertile environment for local artists, from individual renters to our bevy of resident companies, and to develop and produce their work. In 2016, the Greenhouse announced a new residency program, which offers a reduced rate to local storefront companies while giving the Greenhouse a stake in the resident’s success. We house Chicago’s only dedicated used theatre bookstore, located on the second floor of our complex.

With new ideas always incubating, the Greenhouse is flourishing. Come grow with us!

Posted by Bonnie Kenaz-Mara at 1:08 PM