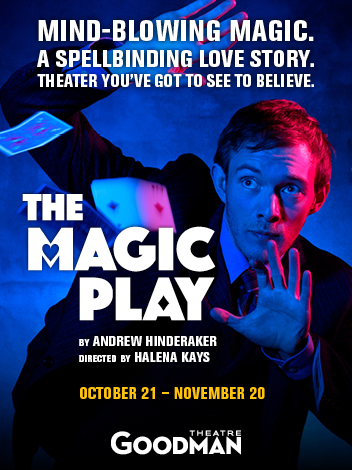 Here at ChiIL Mama and ChiIL Live Shows we are SO excited to catch The Magic Play. Another of my all time favorite female directors is at the helm of The Goodman Theatre's next main stage production, and it's one of my favorite genres! Not only that, there's a great "worlds collide" story with this show too. My teens are both currently in tech week at the Actors Gymnasium and we just got the heads up that AG's Sylvia Hernandez-DiStasi been training Sean Parris and his understudy too, and they're offering a ticket discount code.

Via Actors Gymnasium:
Did you know that actors in Goodman Theatre's The Magic Play have been training with us to prepare for their roles? Sean Parris and understudy Patrick Agada worked intensively with Sylvia Hernandez-DiStasi. You can see them continuing to perfect their technique in our Monday Gymnastics classes.

Because of this partnership, we get to offer you half-price tickets to performances October 21-30*! Use promo code ACTORSGYM at GoodmanTheatre.org/Magic to receive the discount.

What's the Magic Play about?
Deception. Control. Ego. What makes a young magician an incredible showman on stage just might destroy the romance and real magic in his life. Critically acclaimed magician, illusion designer and actor Brett Schneider stars in a mind-blowing spectacle that combines the allure of a live magic show with the poignant punch of Chicago theater.

*Valid on main floor and mezzanine seating only. Not available on previously purchased tickets or in combination with other offers. Expires 10/31/16.

World-class magic meets a human story of love and loss in the world premiere of The Magic Play by Andrew Hinderaker at Goodman Theatre, October 21 – November 20. Critically acclaimed magician, illusion designer and actor Brett Schneider portrays a rising young magician who must take the stage just hours after his partner has left him. Though a good magician must always be in control of his show, The Magician’s performance begins to unravel, illuminating his offstage life, which may be as fragile as a house of cards. The part magic show, part play experience, directed by Halena Kays, features an astonishing ending with the audience helping to shape the final moments of the play. Chicago favorite Francis Guinan (The Father) and Sean Parris (The Diver) round out the three-person cast. The Magic Play, recommended for ages 13 and up, appears October 21 – November 20 in the Owen Theatre. Opening night is Tuesday, November 1. Tickets ($10 - $40; subject to change) are available at GoodmanTheatre.org/Magic, the box office (170 North Dearborn) or by phone at 312.443.3800.

“We’re thrilled to produce the world premiere of Andrew Hinderaker’s fascinating new play, unlike any other staged at the Goodman,” said Artistic Director Robert Falls. “His play is both an endlessly entertaining magic show and an investigation of our appetite for that magic, our need to believe the unbelievable. But beyond our responses to The Magician’s work, Andrew delves into the yearnings of The Magician himself, an artist whose increasing quest for mastery of illusion and perfection on stage threatens to destroy the offstage relationships for which he longs within the inevitable intrusion of uncontrollable, messy reality.”

“Andrew’s play is a unique theatrical experience that is far from your typical magic show,” said director Halena Kays. “It tells a visceral and mature story that reveals the physical poetry of complicated relationships. It's rare to get a cast with all of my first choices. These three uniquely gifted Chicago actors are the most ideal artists to share the story of The Magic Play. Brett has been an integral artistic voice in the creation of the play, and he attacks his performance with bravery, honesty and charm. Any fan of Chicago theater would be thrilled to simply watch Francis Guinan read the phone book. He is a master and a perfect fit for the complicated and beautiful character of The Magician's father. Sean Parris brings the joy, humor and empathy needed as The Diver. He lights up a room, charms the universe and then punches the audience right in the gut with the depth of his emotional honesty. The entire artistic team of The Magic Play is passionate and brilliant—the script is the best I've read in years. All I need to do now is get out of the way and let the magic happen...literally.”

About the Artists
Andrew Hinderaker (Playwright) returns to Goodman Theatre, where he was a member of the 2013/2014 Playwrights Unit. During that time he developed The Magic Play, a co-commission between the Goodman and New York’s Roundabout Theatre Company that appeared at the Goodman’s 2014 New Stages Festival. Hinderaker is an ensemble member of The Gift Theatre and an emeritus resident playwright at Chicago Dramatists. His plays include I Am Going to Change the World; Dirty; Kingsville and Suicide, Incorporated, which premiered at The Gift and was subsequently produced off-Broadway at Roundabout. His play Colossal, which features a dance company, drumline and full-contact football hits, received a National New Play Network (NNPN) rolling world premiere from 2014 through 2016. The inaugural production at the Olney Theatre Center received four Helen Hayes Awards, including the Charles MacArthur Award for Best Original Play or Musical. Most recently, Hinderaker worked as a staff writer for John Logan’s Showtime series Penny Dreadful. He holds an MFA in playwriting from the University of Texas at Austin.

Halena Kays (Director) returns to Goodman Theatre, where she previously directed The Magic Play at the 2014 New Stages Festival. Kays is the former artistic director of The Hypocrites theater company and co-founder and former artistic director of Barrel of Monkeys. Chicago credits include Endgame, Ivywild and Six Characters in Search of an Author at The Hypocrites; Lord of the Flies at Steppenwolf Theatre Company; Burning Bluebeard, Pop/Waits, 44 Plays for 44 Presidents, Daredevils, Daredevils’ Hamlet and Fake Lake at The Neo-Futurists (where she is an artistic associate); Roustabout at Concordia College and Buried in Bughouse Square at The University of Chicago. She has received Jeff Award nominations for Best Supporting Actress and Best Direction. Kays also received the 3Arts Award and was named one of the top 50 “players” in Chicago theater by Newcity. She is a founding member of the artistic collaborative The Ruffians, a graduate of the University of Texas at Austin and Northwestern University, a former member of the Big Apple Circus Clown Care unit and professor of directing at Middle Tennessee State University.

Brett Schneider (The Magician/Magic Consultant) returns to the Goodman, where he appeared in the New Stages production of The Magic Play and reading of Teddy Ferrara. His other Chicago credits include The Life and Sort of Death of Eric Argyle (Steep Theatre), The Great God Pan (Next Theatre), Homecoming 1972 (Chicago Dramatists), The Glass Menagerie (Steppenwolf Theatre Company), Peter and the Wolf (Lookingglass Theatre Company), The Sea (Theatre Mir), Too Much Memory (Sinnerman Ensemble), The Hiding Place  (Provision Theatre), REWIND (The Side Project Theatre) and Rose and the Rime (The House Theatre of Chicago). New York credits include a workshop production of The Magic Play (Roundabout Theatre Company). Los Angeles credits include Orange Lemon Egg Canary (The Complex Theatre). Television credits include You’re So Talented, Chicago Fire, Chicago P.D., Sirens and Vinyl. Schneider's illusion design work has been twice nominated for Jeff Awards for Artistic Specialization and has appeared at Roundabout Theatre Company, Goodman Theatre, Lookingglass Theatre Company, Chicago Children's Theatre, The Strange Tree Group and Strawdog Theatre Company, among others. Schneider is a graduate of Northwestern University and The School at Steppenwolf, and he is a member of the Magic Castle in Los Angeles.

About Goodman Theatre
America’s “Best Regional Theatre” (Time magazine) and Chicago’s premier not-for-profit theater, Goodman Theatre is distinguished by the quality and scope of its artistic programming and civic engagement.

Founded in 1925, the Goodman is led by Robert Falls—“Chicago’s most essential director” (Chicago Tribune), who marks 30 years as Artistic Director this season—and Executive Director Roche Schulfer, who is celebrated for his vision and leadership over nearly four decades. Dedicated to new plays, reimagined classics and large-scale musical theater works, Goodman Theatre artists and productions have earned hundreds of awards for artistic excellence, including: two Pulitzer Prizes, 22 Tony Awards, nearly 160 Jeff Awards and more. Over the past three decades, audiences have experienced more than 150 world or American premieres, 30 major musical productions, as well as nationally and internationally celebrated productions of classic works (including Falls’ productions of Death of a Salesman, Long Day’s Journey into Night,  King Lear and The Iceman Cometh, many in collaboration with actor Brian Dennehy). In addition, the Goodman is the first theater in the world to produce all 10 plays August Wilson’s “American Century Cycle.” For nearly four decades, the annual holiday tradition of A Christmas Carol has created a new generation of theatergoers.

The 2016 opening of the Alice Rapoport Center for Education and Engagement (“the Alice”) launched the next phase in the Goodman’s decades-long commitment as an arts and community organization dedicated to educating Chicago youth and promoting lifelong learning. Programs are offered year-round and free of charge. Eighty-five percent of the Goodman’s youth program participants come from underserved communities.