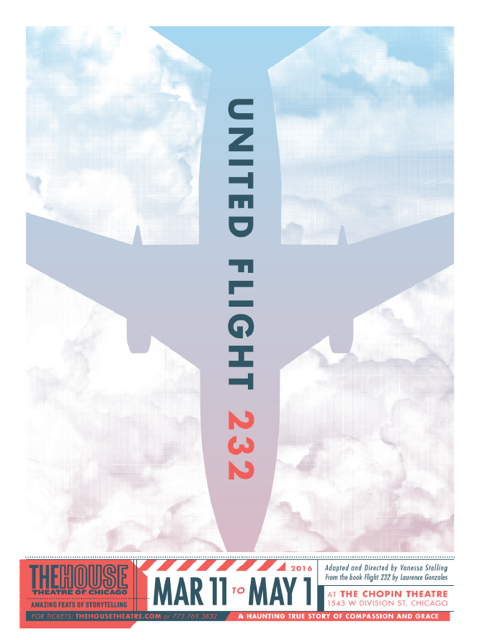 Tonight, ChiIL Mama will be ChiILin' in Chi, IL with one of our favorite storefronts, The House Theatre of Chicago. We were already reviewing elsewhere for the UNITED FLIGHT 232 press opening on 3/20, and the buzz about this show has been great. Can't wait to see for ourselves! Check back soon for our full review.

Regular performances are Thursdays, Fridays and Saturdays at 8 p.m. and Sundays at 7 p.m., from March 25 – May 1. Regular run tickets range from $30 to $35. $10 same-day tickets for students and industry professionals are available for all dates, seats permitting. For more information and to purchase tickets, please visit www.thehousetheatre.com or call 773.769.3832.

“I love you, hurry home. I love you.” On July 19, 1989, a DC-10 headed for O’Hare with 296 aboard is paralyzed mid-air. For 44 minutes, the aircraft descended towards an emergency landing and crashed at Sioux City Gateway airport. To the astonishment of all who witnessed the event, 184 of 296 passengers and crew survived. Drawing on the interviews and research conducted by Evanston author Laurence Gonzales for his critically acclaimed book, Flight 232: A Story of Disaster and Survival, this brand new play, United Flight 232, is a reflection on how to comprehend tragedy and celebrate human ingenuity in the face of overwhelming challenges.

The Washington Post said, “Flight 232 stands alone for its absolutely riveting depiction of the flight’s last minutes and the horrendous aftermath: for its vivid sympathetic portraits of many of those aboard the plane, the crew most particularly.”

The Chicago Tribune called it, “Astonishingly in-depth…”
To learn more about Laurence Gonzales’ book, please visit his website at laurencegonzales.com/232.html.

United Flight 232 was commissioned and developed by The House Theatre of Chicago and the Chicago Performance Lab through the Theatre and Performance Studies Program at the University of Chicago.

ABOUT LAURENCE GONZALES, author
Laurence Gonzales was born in St. Louis, Missouri, and grew up in Houston and San Antonio, Texas.  His book about the crash of United Flight 232 at Sioux City, Iowa, July 19, 1989, Flight 232: A Story of Disaster and Survival, from W.W. Norton, was published on July 7, 2014. He is the author of numerous books, including the bestseller Deep Survival: Who Lives, Who Dies, and Why and the sequel, Surviving Survival: The Art and Science of Resilience (both from W.W. Norton). Gonzales has won many awards, including two National Magazine Awards and the Distinguished Service Award from the Society of Professional Journalists. He has appeared as a speaker before groups ranging from the Santa Fe Institute to Legg Mason Capital Management, the Lawrence Livermore National Laboratory, and the Sloan School of Management at the Massachusetts Institute of Technology. He is also on the adjunct faculty at Northwestern University in the Medill School of Journalism. His most recent novel is Lucy (Alfred A. Knopf). His essays are collected in the book House of Pain (University of Arkansas Press). He is a fellow of the Santa Fe Institute.
ABOUT VANNESA STALLING, adapter and director
Vanessa Stalling is a Chicago freelance director. Recently, Stalling directed The America Play at Oracle Productions and Mutt, by Christopher Chen, a co-production between Stage Left and Red Tape. Other recent work includes Circuscope, Actors Gymnasium, The Normal Heart, Boston University and Pullman W.A, Illinois State University. She is most known for her work as associate artistic director at Redmoon, where she enjoyed directing and choreographing several productions including a remount of The Cabinet, Last of My Species, Winter Pageant, Princess Club, and Twilight Orchard. She is adjunct faculty at Columbia College Chicago and University of Chicago. She is a recipient of the Outstanding University Teacher Award and an Impact Award for her service as an Instructor at Illinois State University.

ABOUT THE HOUSE THEATRE OF CHICAGO
The House is Chicago's premier home for intimate, original works of epic story and stagecraft. Founded and led by Artistic Director Nathan Allen and driven by an interdisciplinary ensemble of Chicago’s next generation of great storytellers, The House aims to become a laboratory and platform for the evolution of the American theatre as an inclusive and popular artform.
The House was founded in 2001 by a group of friends to explore connections between Community and Storytelling through a unique theatrical experience.

Since becoming eligible in 2004, The House has been nominated for 60 Joseph Jefferson Awards (21 wins), became the first recipient of Broadway in Chicago’s Emerging Theater Award in 2007, and was awarded a 2014 National Theatre Company Grant by the American Theatre Wing, founder of the Tony Awards. Now in its 14th year of original work, The House continues its mission to unite Chicago in the spirit of Community through amazing feats of Storytelling.

Posted by Bonnie Kenaz-Mara at 5:17 PM