On giant lampshades, clotheslines, chains and picture frames, Aloft's contemporary circus show, "The Dinner of Our Discontent" veers from heartbreaking to hilarious at the drop of a plate. 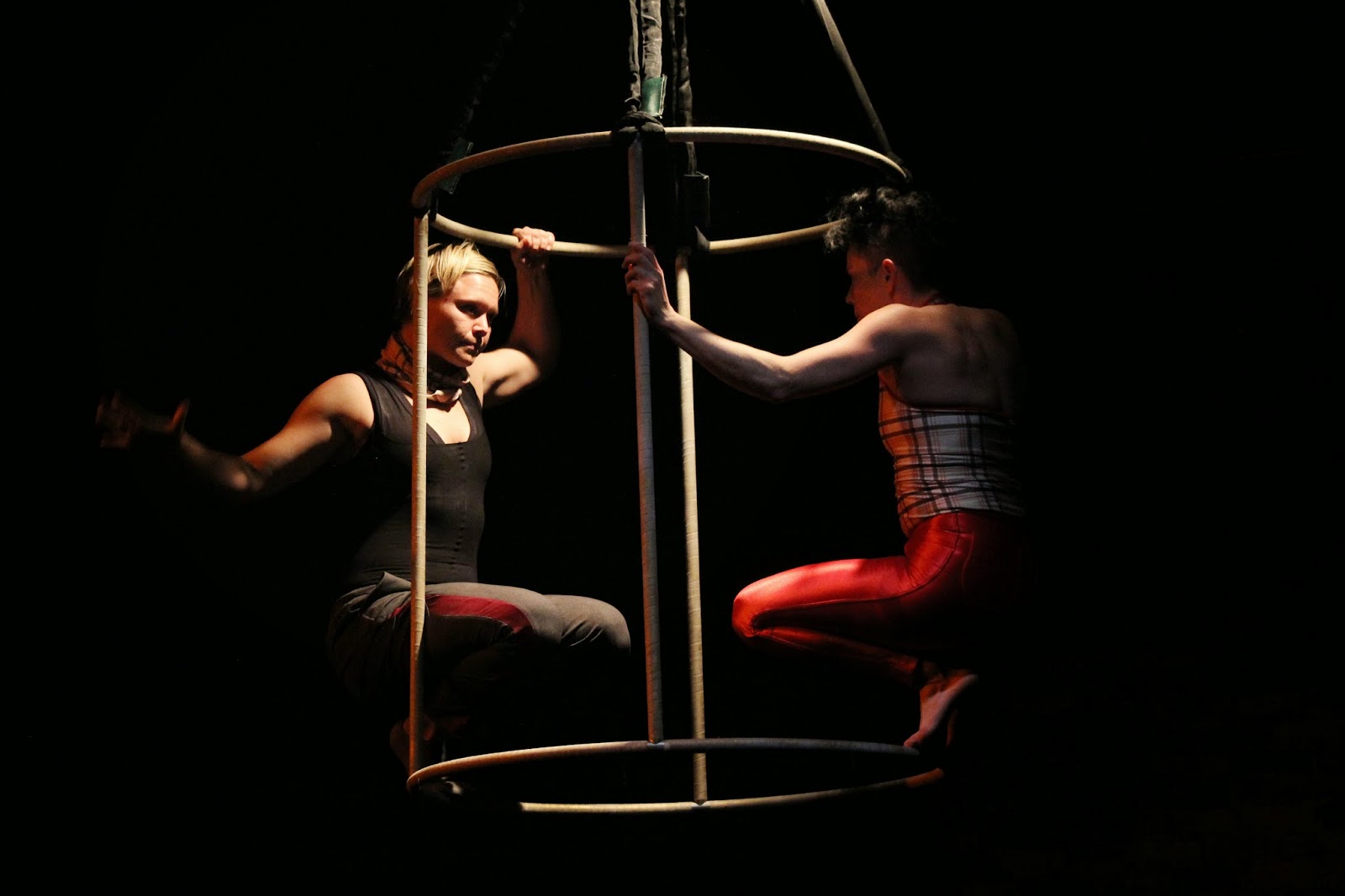 Directed and conceptualized by Shayna Swanson, "Dinner" follows five estranged sisters as they return to the home they grew up in after their parents' sudden deaths. Through world­ class acrobatics and circus acts, childhood emotions and resentments take center stage as they encounter the same issues that plagued them while growing up: the twins still dress (and walk, and eat) alike, the second sister vies for the affection of the oldest, and they all walk heartlessly over the meek youngest sister. And then there's the grief stricken butler who has lived in the house longer than any of the girls, thanklessly raised them and waited on them every day, now faced with having to leave the only family he ever knew while trying to keep the peace. Their deceased parents watch the madness, perched precariously in two picture frames on the back wall, eyes following the action, tormented by their sudden separation and longing for their family to be whole again. 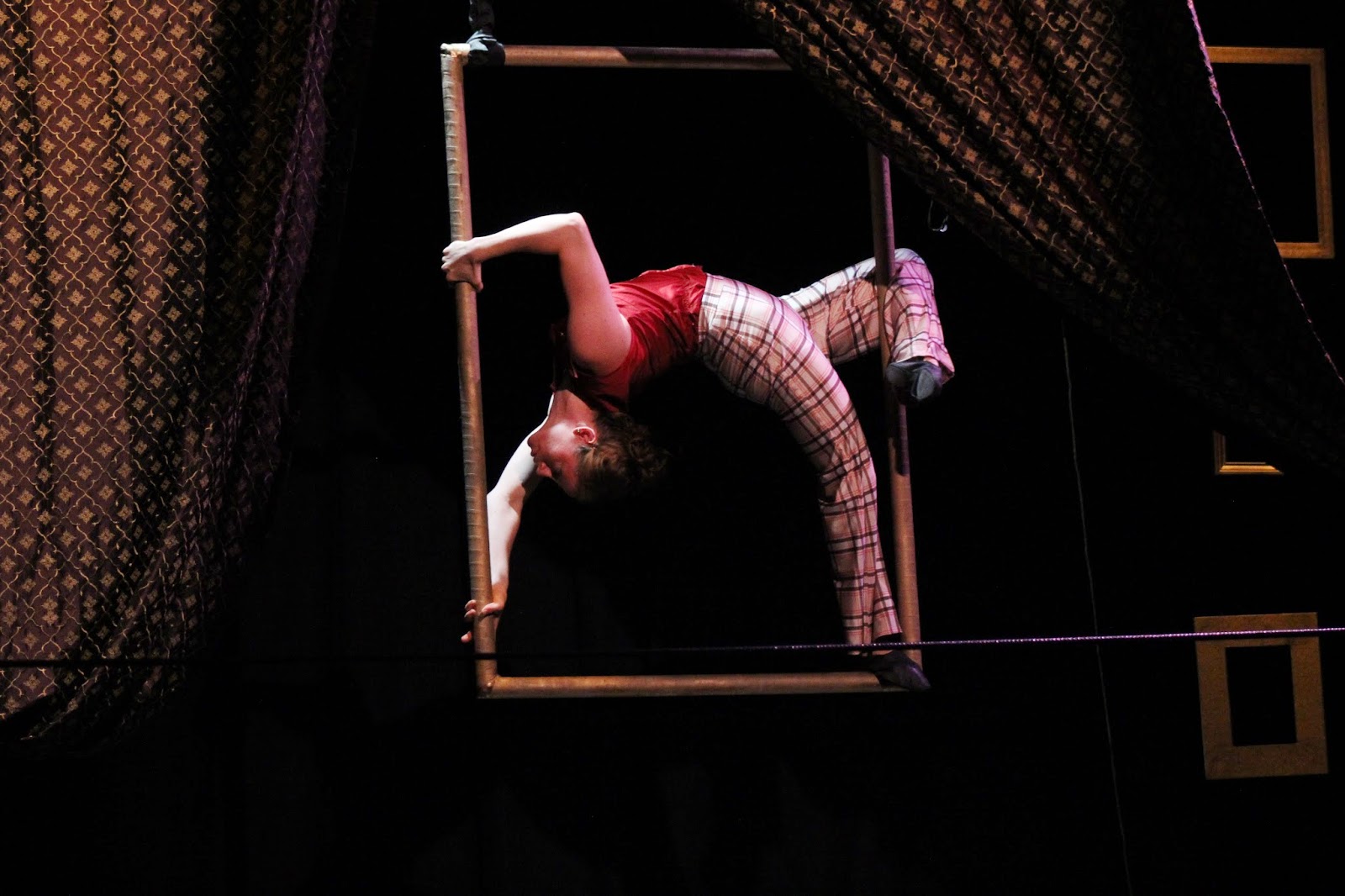 Premiered in 2009, this is a restaging of the original, with an entirely new cast of stunning circus artists. The original acts, high in the air and skittering across the floor, have been reworked to highlight the experience and incredible talents of these performers.

If you were one of the few lucky enough to see the show in its first incarnation, you'll be amazed at the growth of this contemporary circus company over the last 5 years. Aloft's Artistic Director, Shayna Swanson, once part of the cast, steps off the stage to direct the action from the outside, working to heighten the chaos and emotion that the artists bring forth.

Featuring dramatic moments, comic surprises and superb physicality, Dinner of Our Discontent reveals over 75 minutes the central truth about family: it will catch you when you fall, but make you jump through hoops for approval.

Founded ten years ago by Artistic Director Shayna Swanson, Aloft is at the forefront of the contemporary circus movement in the USA.. Hosts of the first­ever Contemporary Circus Festival in North America just last January, Aloft Circus Arts is putting Chicago in the world’s spotlight with ground­breaking shows and the best circus performers working today. Swanson, once part of the cast, steps offstage to direct the action, heightening the chaos and emotion. This is the first time that Aloft has presented a full­length, narrative show in a Chicago based theater.

Animal ­free and accessible for all audiences, Aloft Circus Arts is at the forefront of what modern circus is growing into, pushing the limits and leaving old ideas of “circus” in the dust.

For more information and photos, check us out on Facebook at AloftCircusArts or on our website www.aloftcircusarts.com
Posted by Bonnie Kenaz-Mara at 10:48 AM