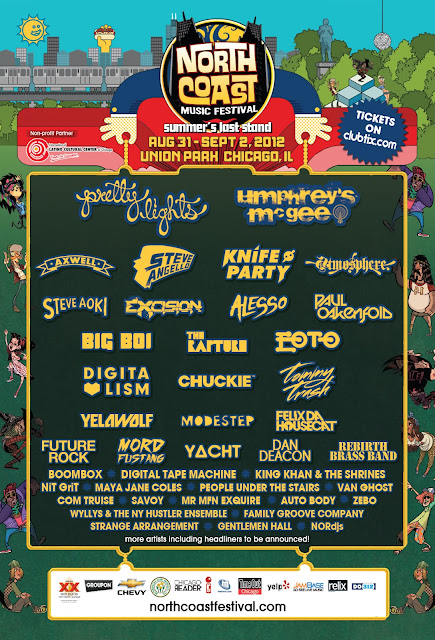 *Remember, this year kids under 10 are free with a paying adult (down from 12 and under last year-boo!)    Still, they've got Riot Fest beat.   They're only admitting punk kin under 5 for free.   Boo and hiss.   So get your little hippies & house freaks outta the house and introduce them to some of your favorites before they're a bar-worthy 18+ or 21+ and would rather die than go to a music fest with their PARENTS!

There are so many sweet choices.    We'll be shooting all 3 days, catching a bunch of sets and even more crowd shots.  Unfortunately--Murphy's Concert Law applies and multiple bands I want to see equally badly are up against each other.   We'll see how things play out or catch some half sets. I'm a bit old school in that it's more fun to shoot a band than a DJ--How many floating head/macbook shots can you really see before it gets boring.    I dig bands with instruments.    That said, we do plan to catch Girl Talk for sure.   We have some jam friends from back in the Grateful Dead and Phish Phreak days who are now completely obsessed with Pretty Lights.    So we may check them out live, too.    We ditched em at Summer Camp Music Festival for burlesque and Jane's Addiction, so since that's not an option here....maybe this time.   We've seen and shot both Girl Talk, Umphrey's McGee and Van Ghost (numerous times) at Summer Camp Music Festival and elsewhere and recommend catching them all this weekend.   We're especially stoked to finally catch Mathien live.   We were in the middle of a video interview with ALO and missed 'em at Summer Camp.   Mathien plays the Dos Equis Stage at 2:30 PM Sunday.   Check 'em out.


**Click the daily schedule links here to hear a sample of each band, read band profiles, set up your own schedule, sync with your friends, and more.**

Here are the Major players


Here's the daily line ups break down with who we're stoked to see featured in red.    We'll be adding loads more as we go and running photo filled band features. Today we've got kids in school & team gymnastics so we can't make it till the headliners.   But Saturday and Sunday are a whole different matter!   Tonight we're all about STS9.