at Broadway In Chicago’s CIBC Theatre 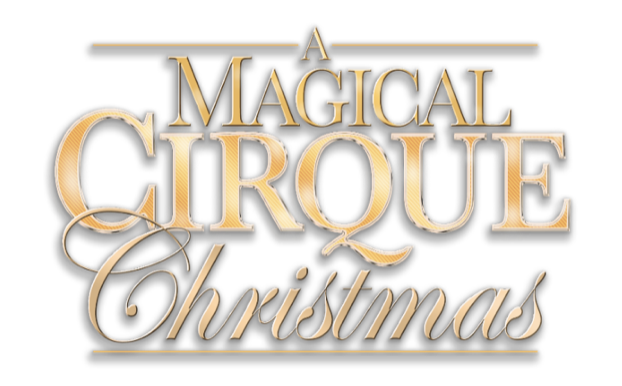 IN A CHRISTMAS TIME ADVENTURE 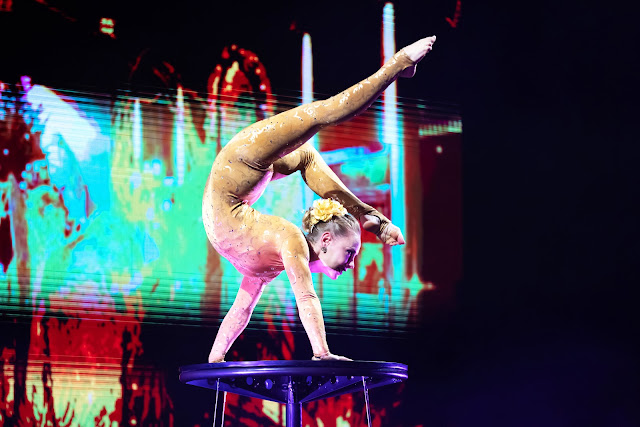 Get in gear and take the family to this time traveling holiday spectacle. Large screen imagery of time spiraling, and gears provide a fun backdrop for a nonlinear romp through history, jumping back and forth through decades of Christmas far and near past. Will the giant, magical clock be fixed or will Christmas 2022 be lost in space?

Here at ChiIL Mama we adore circus arts and magic. We've had the chance to see both A Magical Cirque Christmas and Lucy Darling's solo shows many times were excited to see the two together. Don't sleep on this one, though. A MAGICAL CIRQUE CHRISTMAS is only in Chicago for a 1 week run. Make some family memories with this fun, all ages show.

Holiday spirits run high with superhuman feats of circus arts and Darling illusions. Lucy Darling is a hoot, with her 1950's style glam and boozy illusions, making this show as fun for the adults as the littles. When Lucy's hosting, the whisky bottles never run out and under her magic touch, one shaker can simultaneously pour out 4 completely different cocktails. 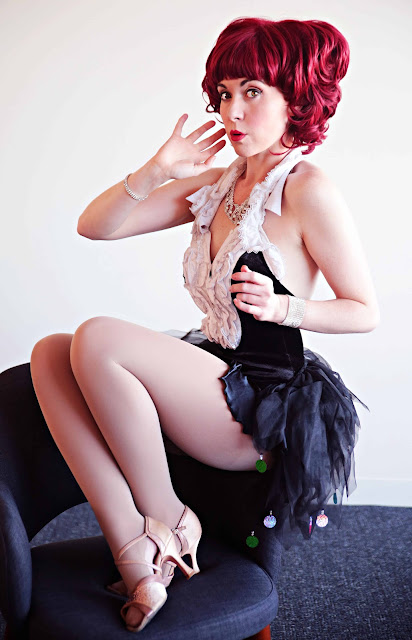 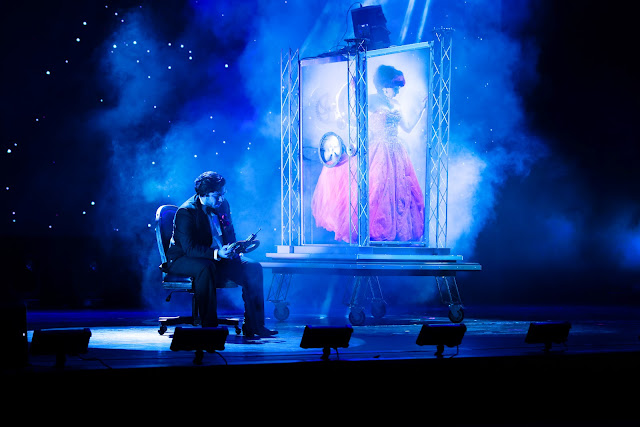 In addition to illusions and table magic, A MAGICAL CIRQUE CHRISTMAS has high flying fun for the whole family, with aerial arts, and entertaining time travel to many decades of Christmas past. 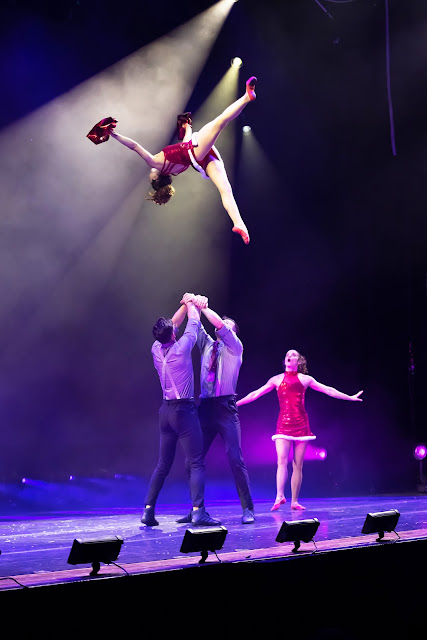 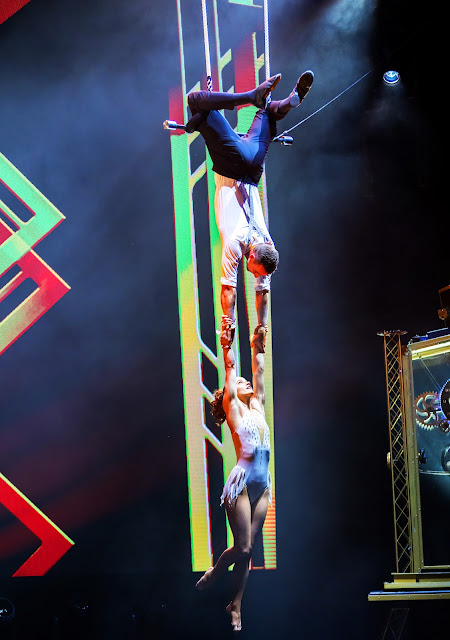 Rock through time from the 50's to the present, with mind bending circus arts and magic, for multigenerational fun. This is one holiday feast for the senses that will appeal to the grandparents on down to the smallest tots. 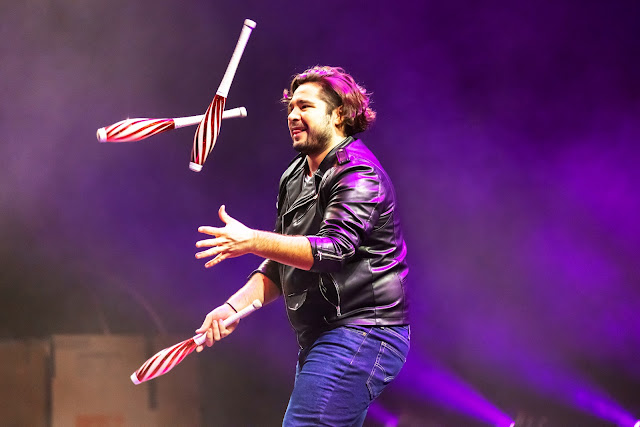 Experiential gift are an excellent, clutter busting choice for those who have everything. This holiday, gift some family together time and lasting memories with cirque style acts and magical illusions, in this fast paced, time traveling tale. Recommended. 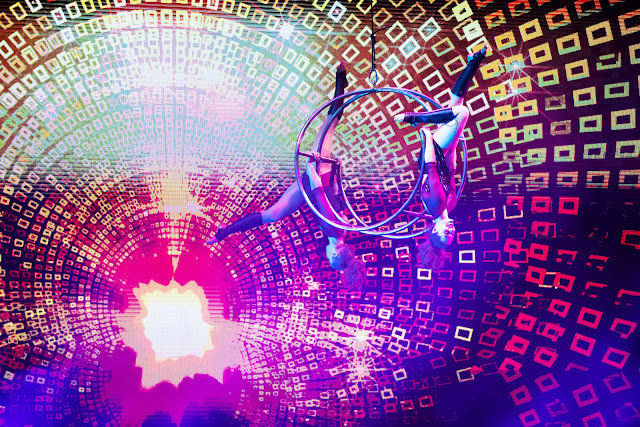 About A Magical Cirque Christmas

A MAGICAL CIRQUE CHRISTMAS features world-acclaimed performers and cirque artists who take audiences back in time, immersing them in the spirit of the season with comedy, music, and magic – performing Christmas classics through the decades. Tickets are available at BroadwayInChicago.com and range from $20-$80 with a select number of premium seats available. Tickets are available now for groups of 10 or more by calling Broadway In Chicago Group Sales at (312) 977-1710 or emailing GroupSales@BroadwayInChicago.com. 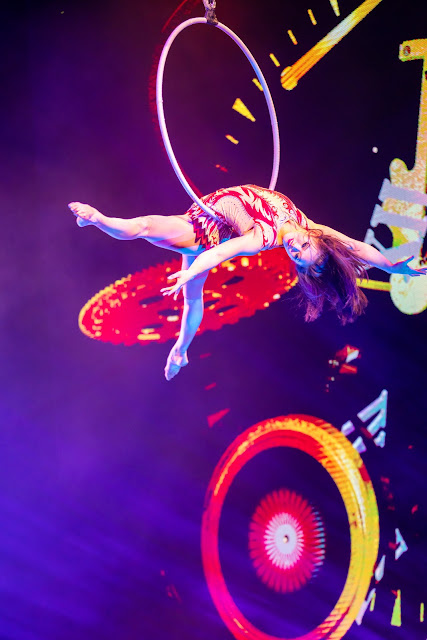 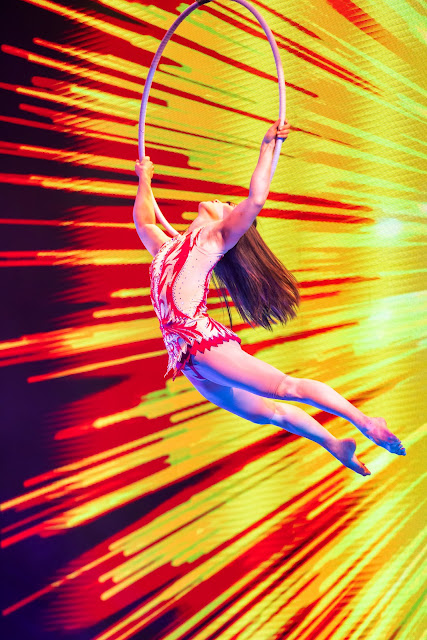 The Christmas tale begins as the Guardian of Time, who manages the changing of the seasons with his giant magical clock, finds himself less than thrilled to face the countdown to the 2022 holidays. In other words, he’s not feeling it. An optimistic, magical Christmas fairy played by the glamourous and comedic magician Lucy Darling whom David Copperfield calls “a true original – hilarious and delightful; An EXCEPTIONAL new talent in magic” appears to help but despite her best intentions, causes time to go haywire when she breaks the clock. 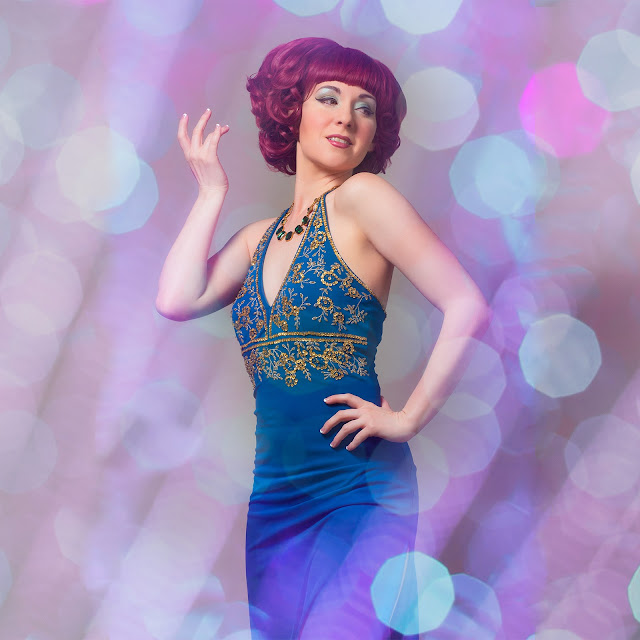 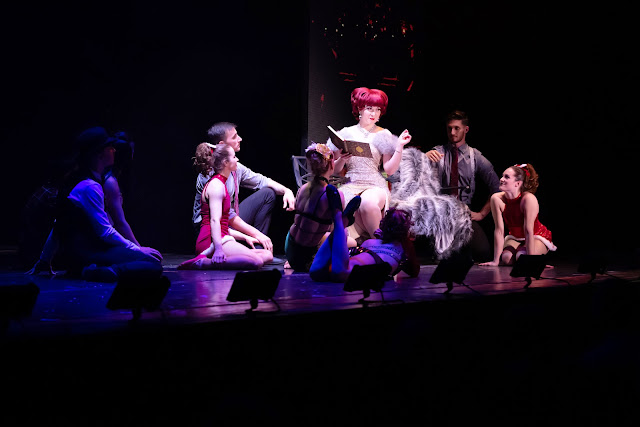 An EXCEPTIONAL new talent in magic”

The story jumps along the time spectrum with visits to the rollicking 1920s a la The Great Gatsby style, the rockabilly 1950s, the boogie-oogie 1970s, and a classic Victorian 1890s London reminiscent of Charles Dickens, and is accompanied by beautiful holiday music from each period. To keep the clock ticking, Lucy Darling uses all her skills with jaw-dropping tricks and amazing feats of illusion, including a levitation that requires a bit of audience participation. 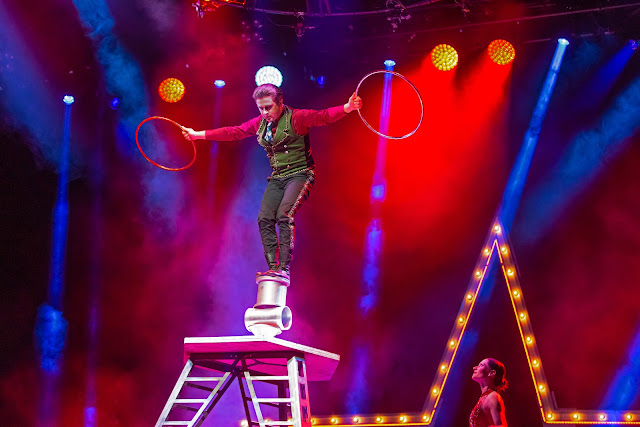 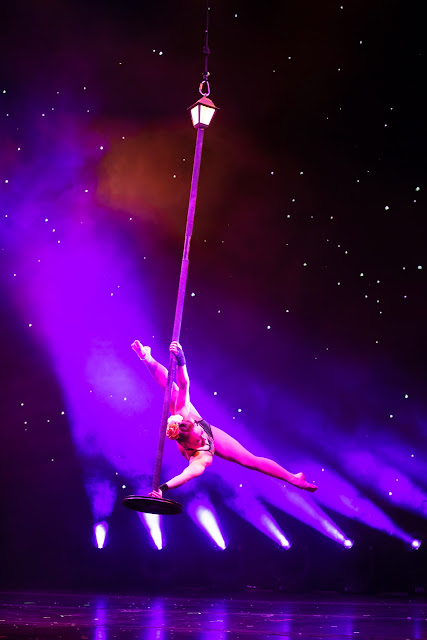 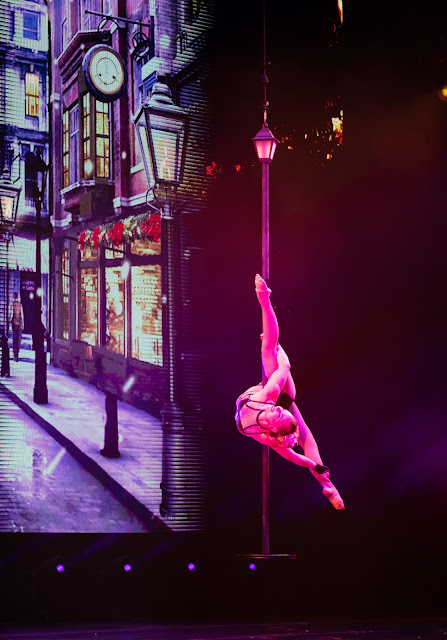 “A Magical Cirque Christmas is a great opportunity to bring friends and family together to reconnect, share laughs, and create new memories during the holiday season. We’ve assembled top-tier talent for an incredible evening of surprises that we think will bring a ton of joy during a cherished time of year,” said Director Louanne Madorma, who has directed cirque shows all around the world.”

For a complete tour schedule go to www.MagicalCirqueChristmas.com. 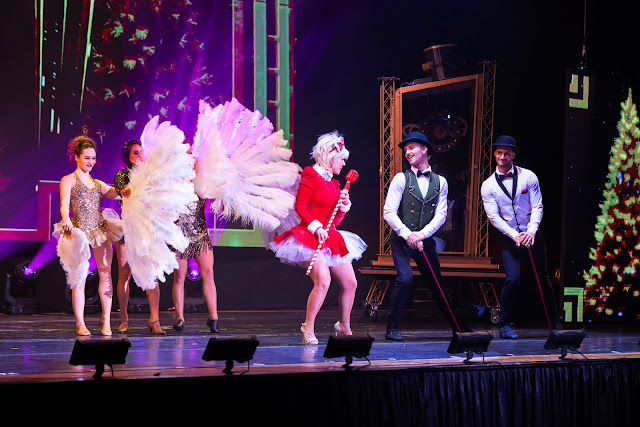 A Magical Cirque Christmas is produced by MagicSpace Entertainment, a boutique producing and presenting firm focused on first-class properties and productions. Based in Park City, UT, the company has produced and presented national tours, Broadway shows, concerts, museum exhibits and sporting events worldwide for over 40 years with a powerhouse producing team focused on providing creative, marketing, and general management expertise.  www.MagicSpace.net

About Broadway In Chicago

Broadway In Chicago was created in July 2000 and over the past 22 years has grown to be one of the largest commercial touring homes in the country.  A Nederlander Presentation, Broadway In Chicago lights up the Chicago Theatre District entertaining up to 1.7 million people annually in five theatres. Broadway In Chicago presents a full range of entertainment, including musicals and plays, on the stages of five of the finest theatres in Chicago’s Loop including the Cadillac Palace Theatre, CIBC Theatre, James M. Nederlander Theatre, and just off the Magnificent Mile, the Broadway Playhouse at Water Tower Place and presenting Broadway shows at the Auditorium Theatre.

Masks are recommended for all audience members. For the latest health and safety procedures and guidelines, click here. 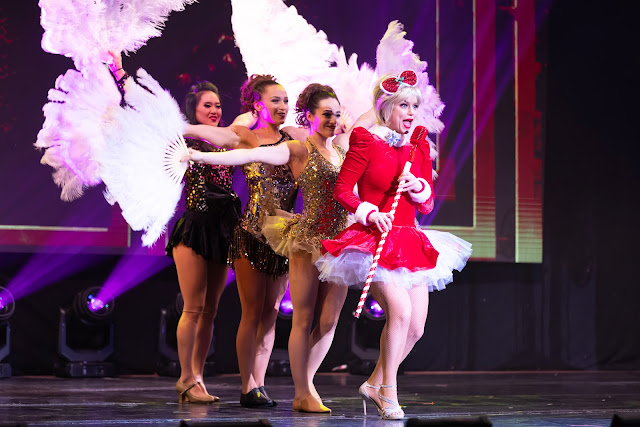 Posted by Bonnie Kenaz-Mara at 4:01 PM