WORLD PREMIERE OF UPON THIS SHORE: A TALE OF PERICLES AND THE DAUGHTERS OF TYRE VIA IDLE MUSE THEATRE COMPANY MARCH 3 - APRIL 3, 2022

FOR THE WORLD PREMIERE OF

UPON THIS SHORE: A TALE OF PERICLES AND THE DAUGHTERS OF TYRE, MARCH 3 - APRIL 3, AT THE EDGE OFF-BROADWAY THEATER 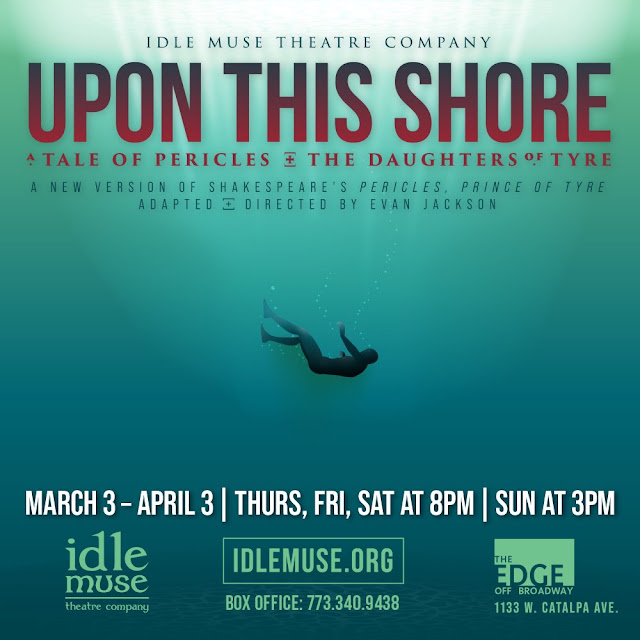 I'll be out to review on March 6th. In the meantime, check back with ChiIL Mama early and often.

Idle Muse Theatre Company is proud to announce the cast for its world premiere production of Upon This Shore: A Tale of Pericles and the Daughters of Tyre, adapted and directed by Artistic Director Evan Jackson+, March 3 - April 3 at The Edge Off-Broadway Theater, 1133 W Catalpa Ave. The performance schedule for Upon This Shore… includes two preview performances Thursday, March 3 and Friday, March 4 at 8 p.m. The performance schedule is Thursdays, Fridays and Saturdays at 8 p.m. and Sundays at 3 p.m. Tickets are now on sale and are $20, general admission; $15, students and seniors and $10 for Thursday Industry Nights at idlemuse.org or the Idle Muse Theatre Company Box Office, 773.340.9438.

“Best for Winter, our last adapted Shakespeare production before the pandemic, represented a process through which Idle Muse began to explore a path forward in a world deeply affected by widespread abuses and loss,” said Jackson. “My hope is that Upon this Shore: A Tale of Pericles and the Daughters of Tyre will be a similar process through which we can explore the work of reuniting after a long separation, both as a company and as a community.”

This new adaptation of Shakespeare’s Pericles, Prince of Tyre is a story about being shipwrecked—over and over again. It’s about those cast reeling, broken against strange shores by unfeeling and inexorable forces, separated from everyone and everything they know. But it’s also about reaching: reaching across the divide to those who have been taken, casting off again to find them...risking being broken again and finally swallowed by the depths. Believing there’s a shore on the other side where a light has been left on for you. It’s about the trail of kindnesses we leave behind to light the way home.

ABOUT EVAN JACKSON+, ADAPTOR AND DIRECTOR

Evan Jackson serves as the artistic director of Idle Muse Theatre Company, a position he has had the honor of holding since the company’s inception. He has directed 13 previous productions for Idle Muse Theatre Company, including last season's Best for Winter, being a short Shakespeare adapted from the Winter’s Tale and other works and Equivocation; The Lion in Winter and Sherlock Holmes: The Final Adventure (both Jeff-Recommended); The Hound of the Baskervilles; The Talking Cure; Rites and Sacrifices, a world premiere by Chicago playwright Jennifer L. Mickelson; Enchanted April; The Scullery Maid. He was also director and co-adaptor of Shotgun Shakespeare: What the Weird Sisters Saw with Idle Muse’s Literary Directo  Tristan Brandon. Outside directing projects include several short plays in the Martin de Maat New Works Festival at Boxer Rebellion Theatre, and two summers serving as assistant director for Shakespeare on the Green in Lake Forest. Jackson is a graduate of The Theatre School at DePaul University, where he received his MFA in Directing.

Idle Muse Theatre Company’s mission is to produce theatre that is transporting,  timely and true. The company was established in 2006 by theatre artists interested in  exploring the relationship between individuals and the worlds they inhabit. Seeking to  create production opportunities for themselves and other artists, they established a modern ‘guild’ of players and environment where theatre artists of different experiences and backgrounds could develop their craft. Today, IMTC remains focused on the following core values:

Transporting: We believe that great theatre removes both audience members and  artists from their respective reality and transports them to another world.

Timely: We believe that human connection can be accomplished through  meaningful, relevant, and accessible storytelling here and now.

True: We believe in unflinching honesty in our signature form of storytelling.

In 2022, Idle Muse Theatre Company also began a profit share model with performers and cast members of each production. In addition to any stipend or payment for services, all cast and production members will receive a percentage of profits after production and marketing costs.

COVID policy: In accordance with the city of Chicago guidelines, individuals over the age of five years old must show proof that they are fully vaccinated against COVID-19 and those 16 years old and older will also need to provide identification that matches their vaccination record. A negative test is not an acceptable substitute.  Additionally, masks are to be worn at all times.

Idle Muse is continuing to monitor the evolving public health situation and will update this guidance as necessary to protect the safety of our audience, cast and production team.

Idle Muse Theatre Company is partially supported and funded by generous grants  from The MacArthur Funds for Arts and Culture at The Richard H. Driehaus  Foundation.

The Edge Theater Off-Broadway has paid street parking and is wheelchair  accessible with complimentary assisted listening devices available. It is located near the Red Line Bryn Mawr stop and is on the 36 Broadway bus route

Posted by Bonnie Kenaz-Mara at 1:38 PM