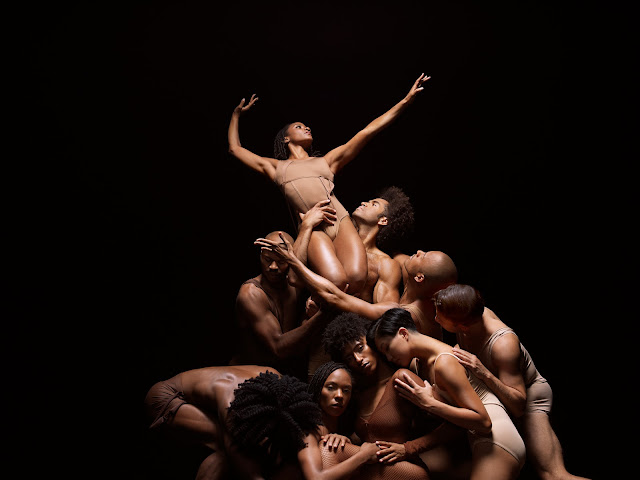 plus, Ailey’s masterpiece Revelations is the inspiring finale of all performances.

I can't wait to see Alvin Ailey American Dance Theater once again. I'll be out to review on Friday, March 4th, so check back with ChiILMama.com early and often.

Three unique programs with premieres, new productions and Ailey classics include the Battle 10th Anniversary program, which opens the Chicago engagement and features

the Chicago premiere of Battle’s For Four adapted from video to stage; the return of hip-hop innovator Rennie Harris’s acclaimed Lazarus; and an Ailey & Ellington program showcasing new productions of beloved works paying tribute to Duke Ellington.  Alvin Ailey’s American masterpiece Revelations, which has inspired generations through its powerful storytelling and soul-stirring spirituals since its creation in 1960, will serve as the finale for all performances.

“For over 50 years, the Auditorium Theatre has proudly welcomed Alvin Ailey American Dance Theater as one of its Visiting Resident Companies,” said Auditorium Theatre CEO Rich Regan. It has been a pleasure to see how this world-class dance company has blossomed under the leadership of Ailey Artistic Director Robert Battle and we look forward to celebrating his 10th anniversary. And after a year’s absence, as Chicago audiences return to theatergoing, among the most anticipated events are performances by this joyous, iconic company.”

“Alvin Ailey’s vision provided the opportunity for generations of artists to use dance to inspire, unite and enlighten,” added Artistic Director Robert Battle. “Despite the twists and turns on the road we have all traveled together, we are excited to be returning to our Chicago home at the Auditorium Theatre while finding new ways to share artistry that renews our spirit of courage, hope, and joy. I am deeply humbled to have led this seminal Company for a decade, joined by incomparable dancers and choreographers on a journey of discovery that extends from the powerful works of our founder to the important voices of today – an ongoing dance dialogue that shines a light on the strength and resilience of our common humanity around the world.”

PROGRAM A: The Chicago engagement opens with the Battle 10th Anniversary program Wednesday, March 2, at 7:30pm, celebrating Robert Battle’s visionary leadership that has moved the Company forward in exciting ways into a seventh decade. The performance unveils the Chicago premiere of Battle’s For Four, translated from dance film to the center stage, set to a Wynton Marsalis delicious jazz score written in 4/4 time, which captures the pent-up energy of a world cooped up during the pandemic. The evening will also include a new production of Battle’s sensuous, swirling duet Unfold, plus Mass, Ella, In/Side, Love Stories finale, and Takademe.  PROGRAM A: The Battle 10th Anniversary program repeats on Saturday, March 5, at 8pm.

PROGRAM B: Ailey & Ellington spotlights new productions of Pas de Duke, Reflections in D, and The River Thursday, March 3, at 7:30pm.  This trio of cherished gems is among more than a dozen ballets Alvin Ailey created celebrating the musical genius of the eminent American composer Duke Ellington that have become cherished Ailey classics. Pas de Duke was Ailey’s modern dance translation of a classical pas de deux honoring two of the most renowned dancers in the world, Judith Jamison and Mikhail Baryshnikov. Reflections in D highlights the grace of the male dancer in a stunning, masterful expression of Duke Ellington’s composition. The River, originally choreographed in 1970 for American Ballet Theatre and first performed by Alvin Ailey American Dance Theater in 1980, combines classical ballet, modern dance, and jazz in sections suggesting tumbling rapids and slow currents on a voyage to the great sea, mirroring the journey of human existence. Also on the bill is perennial favorite Blues Suite, Ailey’s original masterpiece that launched the Company during its first performance in 1958. PROGRAM B: The Ailey & Ellington program repeats on Saturday, March 5, at 2pm. * A conversation with Company artists will take place immediately following the Saturday matinee.

PROGRAM C: Hip-hop innovator Rennie Harris’ acclaimed Lazarus, a powerful ensemble work inspired by the life and legacy of Alvin Ailey, returns to the Auditorium Theatre stage Friday, March 4, at 7:30pm. The acclaimed creation of Ailey’s first two-act ballet is featured in the must-see AILEY documentary that opened the 36th season of PBS American Masters and is available to watch online for free through February 11 (visit pbs.org for more information to watch) and Hulu with a subscription. Director Jamila Wignot’s resonant biography is told through Ailey’s own words, along with interviews of those close to him, evocative archival footage, and historic performances. PROGRAM C: Lazarus repeats on Sunday, March 6, at 3pm.

In addition to the variety of exciting repertory, the inspiring finale of all programs will be Alvin Ailey’s American masterpiece, Revelations, acclaimed around the world for sending hearts soaring and lifting audiences to their feet. Since its debut in 1960, Revelations has been seen by more people than any other modern dance work and has moved audiences through its powerful storytelling and soul-stirring music, evoking timeless themes of determination, hope, and transcendence. Springing from Ailey’s childhood memories of growing up in the south and attending services at Mount Olive Baptist Church in Texas, Revelations pays homage to the rich cultural heritage of the African American and explores the emotional spectrum of the human condition.

Tickets start at $40 and are available at AuditoriumTheatre.org, by calling 312.341.2300, or at the Box Office at 50 E Ida B Wells Drive in Chicago, IL. Click here for phone and in-person hours.  Alvin Ailey American Dance Theater is part of the Auditorium Theatre's International Dance Series offering a 20% discount that also includes Ballet Hispanico, March 26 & 27.  Alvin Ailey American Dance Theatre may also be added to the Auditorium Theatre’s “Create Your Own” Series subscription offering a 15-25% discount. Discounted tickets for groups of 10 or more people are also available. The Auditorium Theatre offers $15 student rush tickets to full-time college students and $5 tickets to young people ages 13-19 with Urban Gateways' Teen Arts Pass program. The Auditorium also offers a Student Savings Club for both college and high school students. The Auditorium Theatre's ADMIT ONE program offers complimentary tickets to Chicago-area community groups.

The Auditorium Theatre 2021-22 Season is made possible in part with support from the John D. and Catherine T. MacArthur Foundation and the Illinois Arts Council Agency. The Auditorium’s official hotel partner is the Palmer House Hilton and their official magazine is Chicago magazine.

In 1958, Alvin Ailey and a small group of dancers took the stage in New York and forever changed American dance and culture. One of the country’s groundbreaking greats, his Company inspires all in a universal celebration of the human spirit using the African American cultural experience and the modern dance tradition. Now in its seventh decade, Ailey continues to move forward under the leadership of Robert Battle, revealing time and again why Alvin Ailey American Dance Theater is one of the world’s most beloved dance companies.  For more information, visit www.alvinailey.org

About The Auditorium Theatre

The Auditorium Theatre, located at 50 E. Ida B. Wells Drive at Roosevelt University in Chicago, is an Illinois not-for-profit organization committed to presenting the finest in international, cultural, community, and educational programming to all of Chicago and beyond as The Theatre for the People. The organization also is committed to the continued restoration and preservation of this National Historic Landmark that originally opened in 1889. For a complete listing of events at the Auditorium Theatre, please visit AuditoriumTheatre.org.

The Auditorium Theatre is fully committed to the health and safety of our patrons and our staff. For this event, patrons 5 and over are REQUIRED to show proof of vaccination at the door. Guests under 5 may gain entry by wearing a mask at all times when not eating and drinking. All guests must wear a mask when not eating or drinking. Click here for the most current safety protocols.

Posted by Bonnie Kenaz-Mara at 4:19 PM