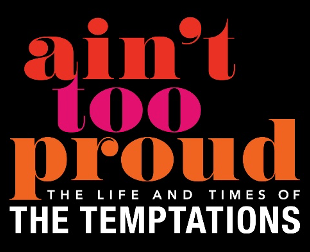 Broadway In Chicago announced today that individual tickets for the First National Tour of AIN’T TOO PROUD – THE LIFE AND TIMES OF THE TEMPTATIONS, the new Broadway smash hit musical are now on sale. Ticket prices range from $29.50 - $116.00 with a select number of premium tickets available. AIN’T TOO PROUD will play sixteen performances at Broadway In Chicago’s Cadillac Palace Theatre (151 W. Randolph St.) from May 24 through June 5, 2022. Individual tickets are available at www.BroadwayInChicago.com. Tickets are available now for groups of 10 or more by calling Broadway In Chicago Group Sales at (312) 977-1710 or emailing GroupSales@BroadwayInChicago.com.

Featuring the Grammy® winning songs and Tony® winning moves, AIN’T TOO PROUD is the electrifying new musical that follows The Temptations’ extraordinary journey from the streets of Detroit to the Rock & Roll Hall of Fame. With their signature dance moves and unmistakable harmonies, they rose to the top of the charts creating an amazing 42 Top Ten Hits with 14 reaching number one and being voted the greatest R&B group of all time by Billboard Magazine in 2017. The rest is history — how they met, the groundbreaking heights they hit, and how personal and political conflicts threatened to tear the group apart as the United States fell into civil unrest. This thrilling story of brotherhood, family, loyalty, and betrayal is set to the beat of the group’s treasured hits, including “My Girl,” “Just My Imagination,” “Get Ready,” “Papa Was a Rolling Stone,” and so many more.

The national tour of AIN’T TOO PROUD is produced by Ira Pittelman and Tom Hulce, in association with Work Light Productions.

Our audiences are required to wear masks and show proof of vaccine. For details or further requirements (that can change without notice) visit broadwayinchicago.com/covid19.

For more information about the show, visit www.AintTooProudMusical.com

Posted by Bonnie Kenaz-Mara at 1:54 PM

Email ThisBlogThis!Share to TwitterShare to FacebookShare to Pinterest
Labels: AIN’T TOO PROUD – THE LIFE AND TIMES OF THE TEMPTATIONS, Broadway in Chicago, Chicago, chitheatre, first national tour, on sale, Theatre