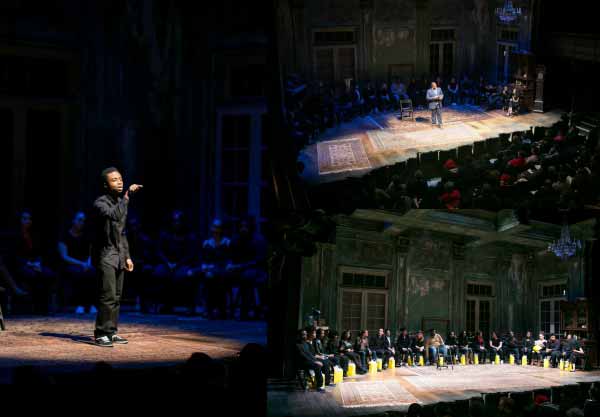 ***STUDENT APPLICATIONS ARE NOW OPEN FOR THE 2022 AUGUST WILSON MONOLOGUE AND DESIGN COMPETITIONS; CHICAGO FINALS SET FOR MAY 2 AT THE GOODMAN, IN COLLABORATION WITH THE LEAGUE OF CHICAGO THEATRES***

The classic, timeless, epic work of seminal American playwright August Wilson endures as a new partnership—the “August Wilson Legacy Project”—forms between the August Wilson Estate, Goodman Theatre and Derrick Sanders. In honor of her late husband and as Executive Director of August Wilson Legacy LLC, Constanza Romero-Wilson taps longtime Wilson collaborator Derrick Sanders/AW-Chicago and Willa J. Taylor/Walter Director of Education and Engagement at Goodman Theatre to reestablish and build on the success of the national August Wilson Monologue Competition and “Designing August” (the scenic and costume design arm of the competition) for a new generation. The new partnership roots the famed Monologue and Design Competitions in Chicago—the first city to have experienced all 10 of the Pulitzer Prize-winning playwright’s American Century Cycle plays produced by Goodman Theatre (where a critically acclaimed major revival of Gem of the Ocean directed by Chuck Smith appears on stage through Sunday, February 27). Building on the robust partnerships with schools in Chicago, this new national collaboration will reinvigorate relationships with theaters across the country, creating educational and performance opportunities that allow students to connect to Wilson and his work through the study of history, social studies and literature. As the “August Wilson Legacy Project” partnership gets underway, the 2022 August Wilson Monologue and Design Competitions now welcomes student applications (see competition timeline below); the Goodman will again host the 20 high school students appearing in the final round on May 2, 2022 at 6pm. The Competitions are presented by Sanders and the Goodman in collaboration with the League of Chicago Theatres; for details, visit ChicagoPlays.com.

"I am thrilled that the August Wilson Monologue Competition will be reimagined by Goodman Theatre in partnership with Derrick Sanders of AW-Chicago. There is no other theater I would be more excited about leading the national competition. The Goodman supported August all throughout his career. I have full faith and trust that they will keep his legacy alive,” said Constanza Romero-Wilson.

August Wilson’s 10-play American Century Cycle is a singular achievement in the American theater. Goodman Theatre was first in the nation to produce every play—including two world-premiere productions—of the cycle, each one set in a different decade of the twentieth century, including: Gem of the Ocean (1900s), Joe Turner's Come and Gone (1910s), Ma Rainey's Black Bottom (1920s), The Piano Lesson (1930s), Seven Guitars (1940s), Fences (1950s), Two Trains Running (1960s), Jitney (1970s), King Hedley II (1980s) and Radio Golf (1990s). At the plays’ core are lyrical monologues that take the song, laughter and pain of the African American experience and place it in the mouths of the most varied ensemble of characters written since Shakespeare.

"We are honored and excited to work with the Estate of August Wilson to reimagine and expand opportunities for students through the national competition, and to partner with theaters and organizations around the country to ensure that generations of young people will know the poetry of his language, the richness of his legacy and the brilliance of this great American playwright," said Walter Director of Education and Engagement Willa J. Taylor who, during her 15 seasons at the Goodman has created 14 new education and engagement programs—including Teaching August Wilson, which develops educators’ capacity to use Wilson’s American Century Cycle as a lens for American history.

The free August Wilson Monologue Competition gives Chicagoland youth an opportunity to explore and share the richness of Wilson’s American Century Cycle through master classes and offering college scholarships. The newest aspect of the competition—“Designing August,” focusing on scenic and design elements—returns for its second year. Program participants from around Chicago encounter Wilson’s ten-play cycle and receive coaching from teaching artists to prepare their monologues for competition.

May 2 Final Monologue and Design Competition (at Goodman Theatre, 6pm)

Born and raised in the Hill District of Pittsburgh, Pennsylvania, August Wilson (1945-2005) authored the American Century Cycle of 10 plays, including Gem of the Ocean, Joe Turner’s Come and Gone, Ma Rainey’s Black Bottom, The Piano Lesson, Seven Guitars, Fences, Two Trains Running, Jitney, King Hedley II and Radio Golf. These works explore the heritage and experience of African Americans, decade by decade, over the course of the 20th century. Goodman Theatre was the first in the country to have produced every play in Wilson’s cycle. In 2003, Wilson made his professional stage debut in his one-man show How I Learned What I Learned. Wilson’s work garnered many awards, including Pulitzer Prizes for Fences (1987) and The Piano Lesson (1990); a Tony Award for Fences; Great Britain’s Olivier Award for Jitney; as well as seven New York Drama Critics Circle Awards for Ma Rainey’s Black Bottom, Fences, Joe Turner’s Come and Gone, The Piano Lesson, Two Trains Running, Seven Guitars and Jitney. Additionally, the cast recording of Ma Rainey’s Black Bottom received a 1985 Grammy Award and Wilson received a 1995 Emmy Award nomination for his screenplay adaptation of The Piano Lesson. On October 16, 2005, Broadway renamed the theater located at 245 West 52nd Street the August Wilson Theatre.

Willa J. Taylor is the Walter Director of Education and Engagement at Goodman Theatre. In her 15 seasons, she has created 14 new education and engagement programs, including InterGENS, which partners seniors and teens to create original narrative performances that address community concerns; Stage Chemistry, a unique interactive curriculum for students based on science and math concepts onstage; NOURISH, which mentors community organizations interested in finding art-based solutions to community-identified problems; and Teaching August Wilson, which develops educators’ capacity to use Wilson’s American Century Cycle as the lens for American history. Taylor was the 2020 inaugural recipient of the Exemplar Award from the August Wilson Society for her advocacy for teaching August Wilson’s work in schools; and was honored with the 2021 Leadership in Community-Based Theatre and Civic Engagement Award from the Association for Theatre in Higher Education. She is adjunct faculty at DePaul University where she teaches dramaturgy for youth, and leads workshops nationally on facilitation, intergenerational organizing, and trauma-informed pedagogy. Taylor is a writer and storyteller who performs nationally. She is a contributor to Arts Integration in Education: Teachers and Teaching Artists as Agents of Change, published by Intellect LTD; and to Applied Theatre with Youth: Education, Engagement, Activism, published by Routledge. Her scholarship will also be featured in the forthcoming edited collection: August Wilson In Context with Cambridge University Press. She holds a Masters of Fine Arts from American University, Masters of Education from Concordia University, and a culinary degree from Kendall College.

Chicago theater is the leader in the U.S. with more than 250 theaters throughout Chicagoland, comprising a rich and varied community ranging from storefront, non-union theatres to the most renowned resident theaters in the country, including five which have been honored with Regional Tony Awards, and the largest touring Broadway organization in the nation. Chicago’s theaters serve five million audience members annually and have a combined budget of more than $250 million. Chicago typically produces and/or presents more world premieres annually than any other city in the nation. Each year, Chicago theaters send new work to resident theaters across the country, to Broadway, and around the world.

Theater is essential to the life of a great city and to its citizens. The League of Chicago Theatres is an alliance of theaters which leverages its collective strength to support, promote and advocate for Chicago’s theater industry. Through our work, we ensure that theater continues to thrive in our city.

Chicago ’s theater since 1925, Goodman Theatre is a not-for-profit arts and community organization in the heart of the Loop, distinguished by the excellence and scope of its artistic programming and community engagement. Led by Artistic Director Robert Falls and Executive Director Roche Schulfer, the theater’s artistic priorities include new play development (more than 150 world or American premieres), large scale musical theater works and reimagined classics. Artists and productions have earner two Pulitzer Prizes, 22 Tony Awards and more than 160 Jeff Awards, among other accolades. The Goodman is the first theater in the world to produce all 10 plays in August Wilson’s “American Century Cycle.” Its longtime annual holiday tradition A Christmas Carol, now in its fifth decade, has created a new generation of theatergoers in Chicago. The Goodman also frequently serves as a production and program partner with national and international companies and Chicago’s Off-Loop theaters.

Using the tools of the theatrical profession, the Goodman’s Education and Engagement programs aim to develop generations of citizens who understand the cultures and stories of diverse voices. The Goodman’s Alice Rapoport Center for Education and Engagement is the home of these programs, which are offered free of charge for Chicago youth—85% of whom come from underserved communities—schools and life-long learners.

Goodman Theatre was founded by William O. Goodman and his family in honor of their son Kenneth, an important figure in Chicago’s cultural renaissance in the early 1900s. The Goodman family’s legacy lives on through the continued work and dedication of Kenneth’s family, including Albert Ivar Goodman, who with his late mother, Edith-Marie Appleton, contributed the necessary funds for the creation on the new Goodman center in 2000.