by Bridget Bodo and her son, Sebu Bodo 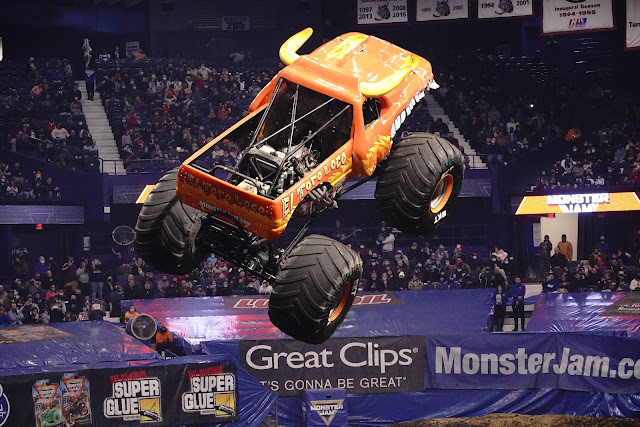 All Photos by Sebu Bodo

When I showed my fifteen year old son a photo of a monster truck standing on two wheels and asked if he would like to go to Monster Jam, he may have lacked the exuberance of a five or six year old, but he said sure and that it looked “fun”. He had been to stock car racing in the suburbs years ago and found that exciting, so we both assumed this would be in the same ballpark. He asked if we could bring his friend and when the plans were set, we started the journey Friday evening from Chicago to Rosemont. This was at 5:30pm and right in the middle of rush hour, so it was a solid hour to get to the show which was being held at Allstate Arena. 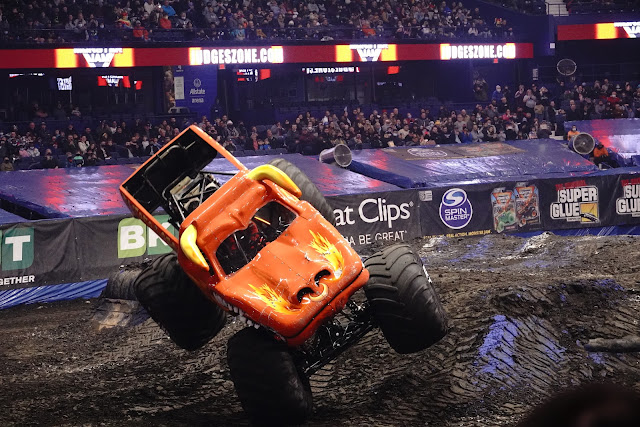 Unlike going to a Chicago Wolves game at Allstate Arena, the traffic for Monster Jam started a mile or so down the road. Clearly it has a LOT of fans! Even with people working the traffic and parking detail, it still took about twenty to thirty minutes to park. Unfortunately, this put us right at the 7pm start time. The $25 parking fee didn’t help to brighten the moment, either. Luckily the security check was quick and no one had to stand outside in the twenty degree temperatures, but it definitely would have been better to plan for the parking delay in advance.

As we hurried to our section, we were startled by the sudden sound that was clearly blaring engines. Alas....the signature sounds of Monster Jam, I’m sure!!! Luckily, I am a person who has always valued hearing and has taken ear protection very seriously, so once we found our seats and sat down, I quickly handed my son and his friend some colorful pairs of earplugs I brought from home and put the remaining pair in my ears. In no time, we were all wearing them and were able to focus on the show. Upon checking the Monster Jam website, I found out that ear protection, including novelty wear, is sold at the show while supplies last. That was reassuring as the noise level would have made watching the show without them extremely uncomfortable. 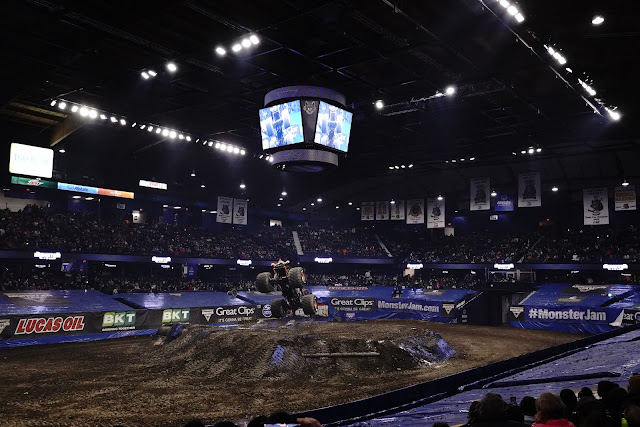 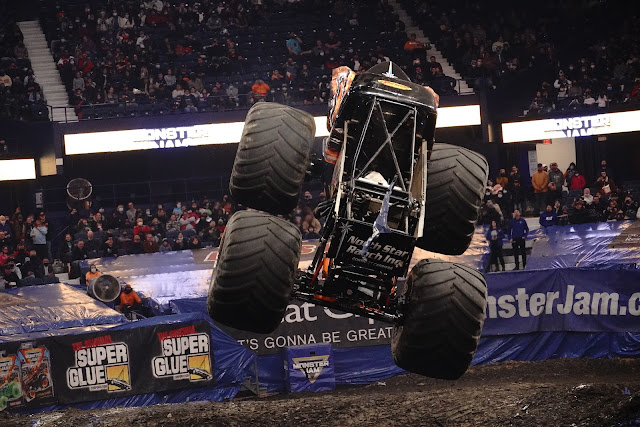 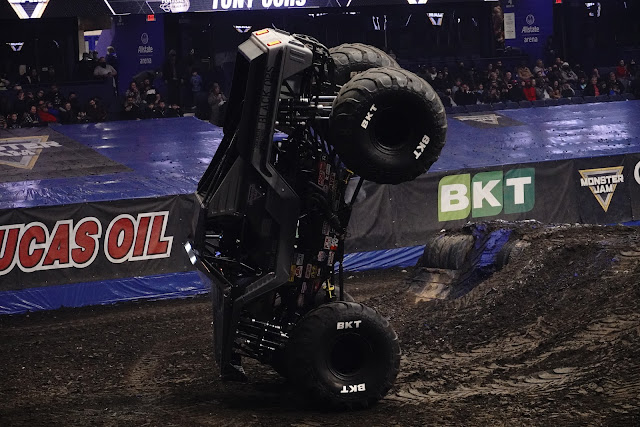 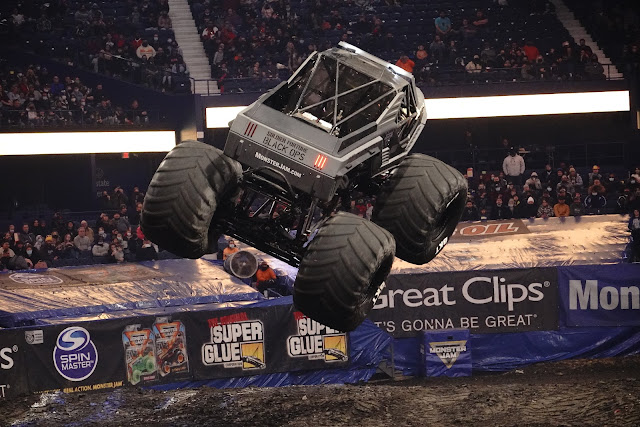 Something else that was slightly uncomfortable was the air quality. Even with giant fans blowing and seemingly no heat (our winter coats and hats stayed on the entire time), dust particles from the trucks spinning their tires were airbound. One time there were chunks of mud thrown up into the audience, even striking a teenager two rows in front of us. He found it amusing and it may just be what every seasoned fan in the closer rows looks forward to at Monster Jam, but in case someone is new to the event like we were, it is something to consider when choosing seats, especially the seats in the rows closer to the action. The seating that we were in also had very little leg room. Considering I’m a person who, courtesy of an accident, only has one real leg to deal with, it still was a tight fit. I learned that there was more spacious seating for people with disabilities as well as VIP seating, but as for the general seating, at least in section 113, it was a little tight. 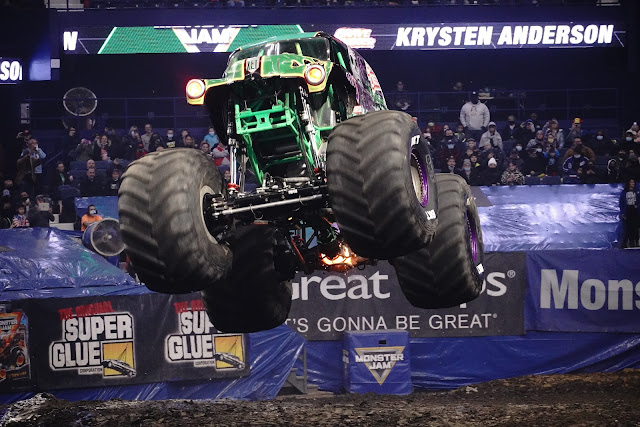 But then, none of that seemed to matter. Almost instantly, we were caught up in the energy of what must truly be “Monster Jam”! Families everywhere, with children from toddlers to  teens, were smiling, laughing and cheering on the various trucks as each one tried to get the highest scores racing each other around the track. There was a scoreboard and an announcer and judges were mentioned, but the announcer kept reminding the fans that they were the ones to truly decide the scores by way of an online vote. 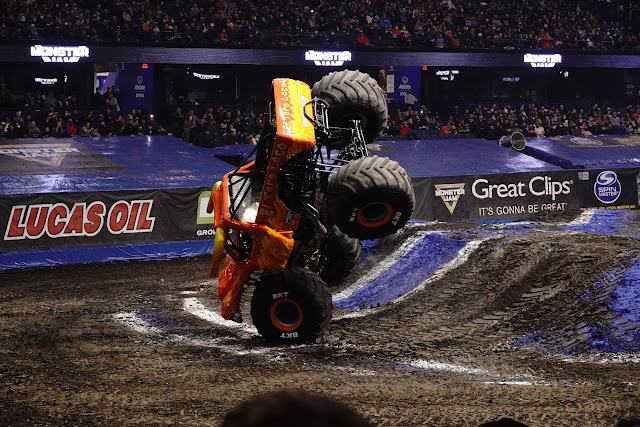 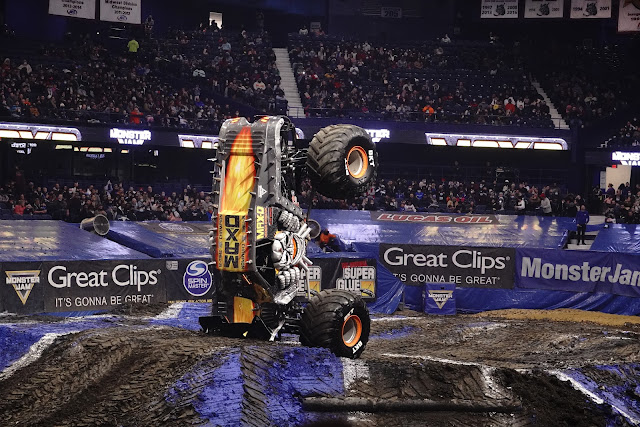 As we didn’t receive any sort of program and I didn’t see anything about a QR code for a program, it took me about half the show to see that there was a website being displayed. Clearly my contact lens prescription needs updating because I read the website as judgezone.com instead of judgeszone.com (which I found the next day from the official Monster Jam website). This small mistake took me to an unsecure website which had various choices regarding monster trucks and Monster Jam but otherwise seemed spammy. After a few attempts, I gave up but realized it didn’t affect the experience we had with the show.

The results of each competition, from monster truck races to freestyle dirt bikes to monster truck donuts to monster truck freestyle, were clearly displayed after each event. Recaps of each truck and dirt bike’s standing in the overall competition were also displayed from time to time. What was remarkable, too, was the general feeling in the room. Competitors would win, they would lose, and always they would stay in good spirits. Arms up and jumping up and down to elicit crowd reaction and support for doing something well, or a shrug and arm stretched out to give credit for a job well done to a fellow competitor in times of a loss, with a name like “Monster Jam” and the idea of tough-looking monster trucks in general, I never would have guessed that is how it would have played out. It truly was a family-friendly event full of good sportsmanship....which everyone can learn from. 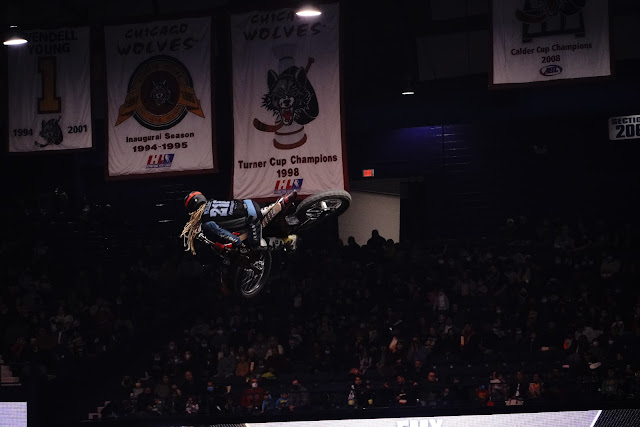 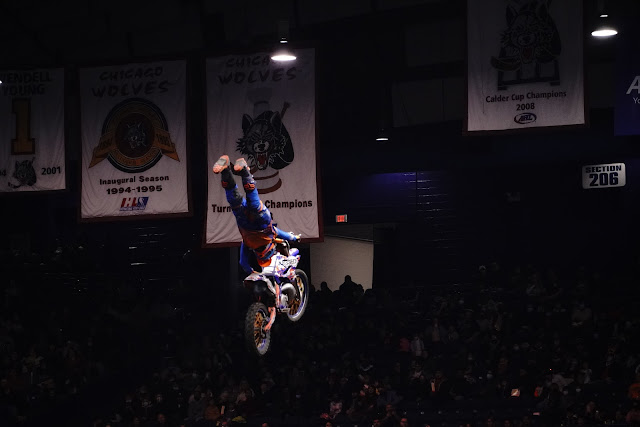 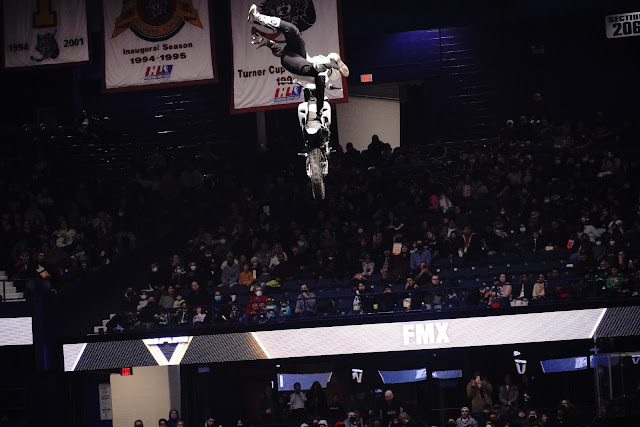 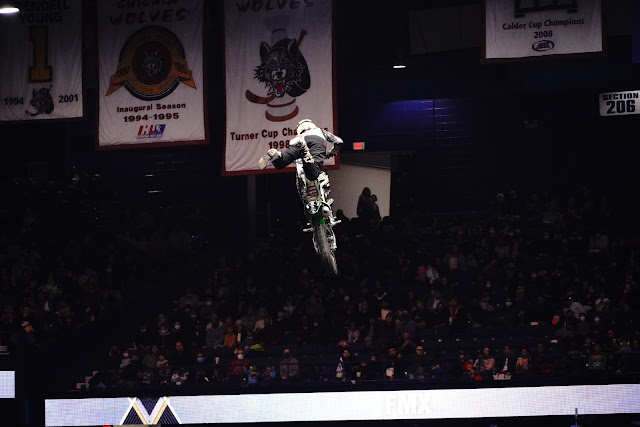 After about four events with breaks in between, each with their own set of entertainment as well as and an opportunity to stand up and stretch, get a bite to eat from one of the numerous vendors, or use the restrooms, the event was over and we were left with an overall feeling of an evening well-spent. With all of the otherwise unimaginable tricks and flips that we saw, Monster Jam certainly will be unforgettable. 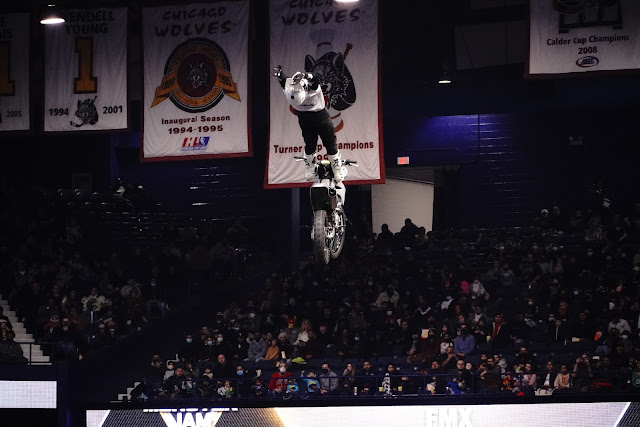 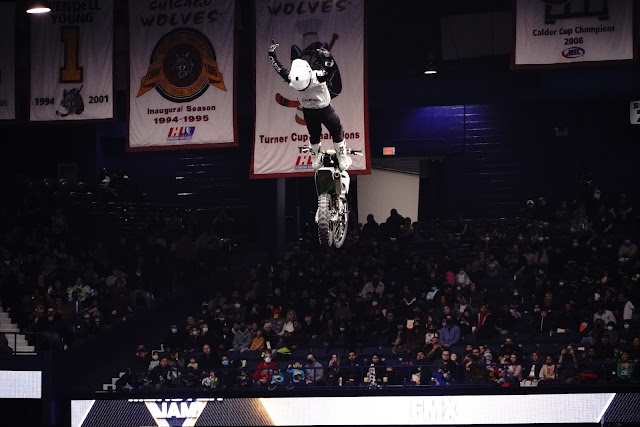 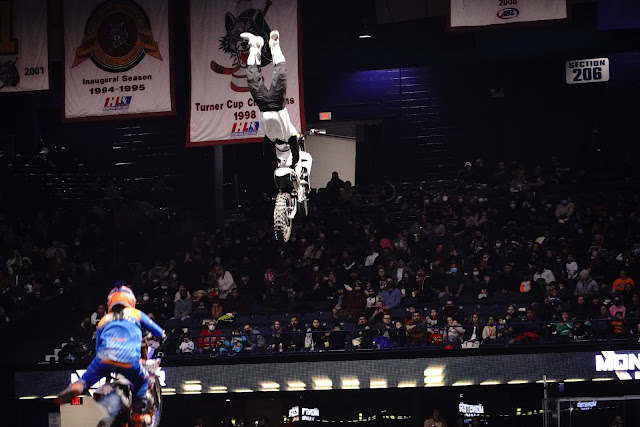 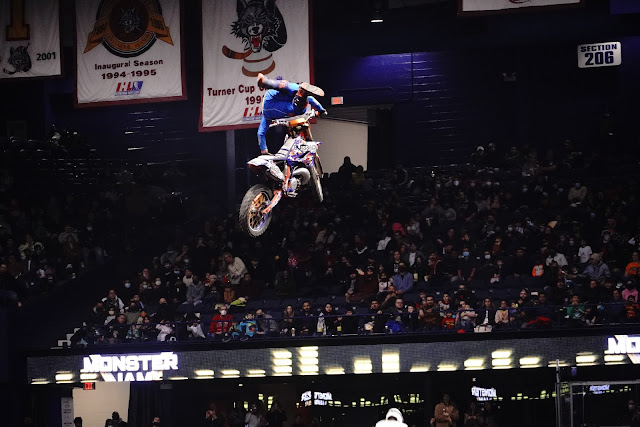 Bridget Bodo is an actor, writer, speaker, sailboat racer, survivor and a mom. Despite losing her left leg traumatically, she’ll never tire of “Break a leg” being said to her. She finds humor in the irony of it all. 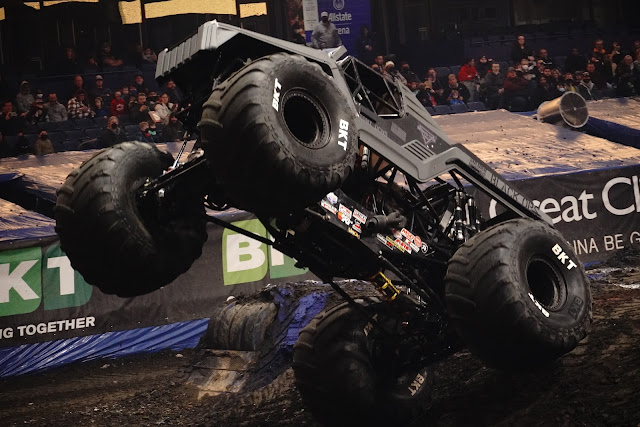 Here at ChiIL Mama, we've been covering Monster Jam for years and we're thrilled to see them roaring back, post pandemic. We're even more stoked that the freestyle dirt bikes jumps are back in the lineup, as that's always been a huge hit with our family and a big fan favorite.

Rosemont fans will witness a fierce battle for the event championship with each skilledMonster Jam athlete tearing up the dirt with gravity-defying feats in 12,000-pound Monster Jam trucks going head-to-head for points in Freestyle, the Skills Challenge and Racing competitions. Watch your favorite Monster Jam trucks and drivers go head-to-head in a competitive format that is sure to keep fans on the edge of their seat.

Monster Jam is working closely with our venue partners to adjust protocols for the safety and wellness of guests based on state and local requirements. 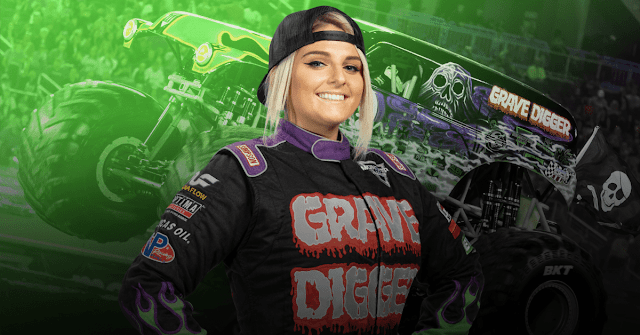 Happy to see Krysten Anderson is driving one of the top favorites, Grave Digger, inspiring mighty girls, and proving that big trucks aren't just for boys!

**ChiIL Tips: Remember ear plugs or over ear protection for everyone and for children in particular. Monster Jam can be LOUD.**

Scroll down and check out lots of ChiIL Mama's past original photo and video filled Monster Jam features here! 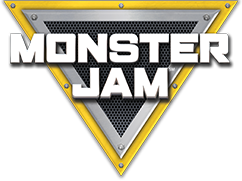 Posted by Bonnie Kenaz-Mara at 5:19 PM