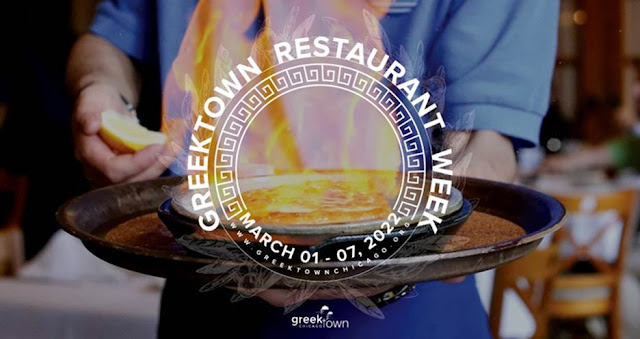 Greektown Chicago celebrates Greek Independence Day all month long in March with a series of public programs. The popular Greektown Restaurant Week returns for a second year, March 1-7, 2022, with discounts and special offers from restaurants throughout the neighborhood—including the legacy Greek restaurants that have been in Greektown for decades. Next up is the Chicago Bulls Greek Heritage Night on Friday, March 4, where the Bulls face off against the Milwaukee Bucks and "Greek Freak" Giannis Antetokounmpo at the United Center. The special Greektown ticket promotion includes an exclusive Greek flag/Bulls logo beanie hat for attendees while supplies last. The month ends with a Greek Independence Day virtual event on Friday, March 25, showcasing last year’s special 200th anniversary Greek Independence Day celebration with stories from prominent Greek Americans across Chicago.

Participating Restaurant Week businesses March 1-7 include legacy Greek restaurants Artopolis Bakery and Café (20% off Cafe menu, excluding coffee, Bakery and Agora), Athena Restaurant (free saganaki with any entrée order), Greek Islands Restaurant (50% off bottles of wine and beer), Mr. Greek Gyros (buy a Gyros Plate and get a slice of strawberry cheesecake free, valid 9 a.m.-6 p.m. daily) and Spectrum Bar & Grill (a glass of Greek wine for $1 with the purchase of any entrée). Other participants include Dugan’s (half-price Guinness beer on March 1 only) and Taco Burrito King ($5.99 special on Mexican tortas, dine-in and carryout).

Coinciding with Greektown Restaurant Week is the Chicago Bulls Greek Heritage Night on Friday, March 4 at 6:30 p.m. The Greektown community will cheer on the Bulls at the United Center as they go up against the Milwaukee Bucks and "Greek Freak" Giannis Antetokounmpo. Each ticket purchased includes a special edition Bulls/Greek hat (Bulls logo on the front and Greek flag on the back) while supplies last. Limited tickets are available for purchase here. Ticket holders can pick up their hats at the table outside section 114 on the 100 Level concourse until the beginning of the second quarter. Those who attend are encouraged to take advantage of Greektown Restaurant Week specials by dining in Greektown before or after the game!

To cap off the month of Greek heritage celebrations, Greektown commemorates Greek Independence Day on Friday, March 25 by sharing its virtual celebration from last year’s 200th Anniversary of Greek Independence across Greektown social media channels. The free virtual program includes a special recorded performance from popular Greek singer Glykeria of the song “Να 'τανε το '21” (Let it be ‘21), which commemorates the start of the Greeks’ fight for independence in March 1821. It also includes a dynamic history of Chicago’s Greek American community, with stories from prominent Chicagoans and archival photos highlighting the city’s Greek Independence Day celebrations and parades over the past 126 years. Audiences can follow Greektown on Facebook, Instagram and Twitter to join the March 25 virtual celebration.

Greektown is a dining, nightlife and cultural district located on the Near West Side of Chicago. A popular destination for tourists and Chicago residents alike, Greektown offers the best sampling of Greek heritage outside of Athens—from authentic restaurants, cafes and shops to the National Hellenic Museum and annual Taste of Greektown festival. Greektown Special Service Area #16 is the business improvement district for the neighborhood, administered by sole service provider the West Central Association and guided by a volunteer commission of local business owners, property owners and residents. For more information, visit GreektownChicago.org.

Posted by Bonnie Kenaz-Mara at 8:29 PM