NOW PLAYING AT BROADWAY IN CHICAGO’S 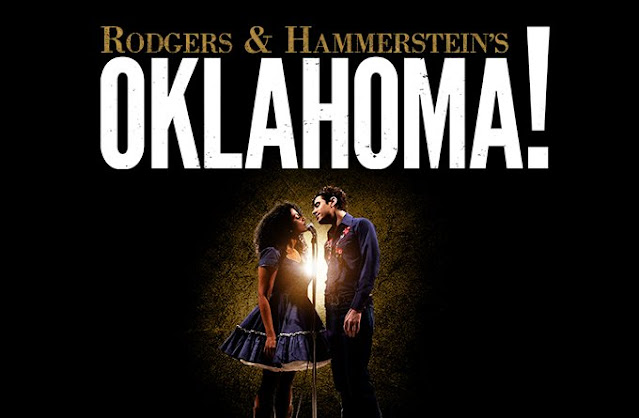 COVID protocol: all patrons must show proof of vaccination and remain masked at all times. 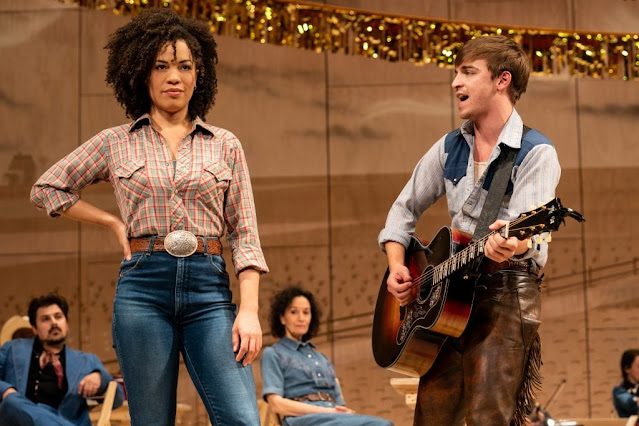 REVIEW:
By Bonnie Kenaz-Mara
What's the matter with Oklahoma? It's full of small town idiots, loose women, and insular locals. It's also a great place to get away with murder in front of the entire town's population, as long as the victim's an outsider and the killer's kin. Daniel Fish's creative and confounding new take on Oklahoma is well worth a look, but don't expect big square dance numbers, 1906 frocks, and the happy go lucky western most think of when they hear that Oklahoma's on stage. This is not your parents' musical. After the show I overheard a woman say "I didn't hate it... I didn't love it." and that seems to be the consensus. 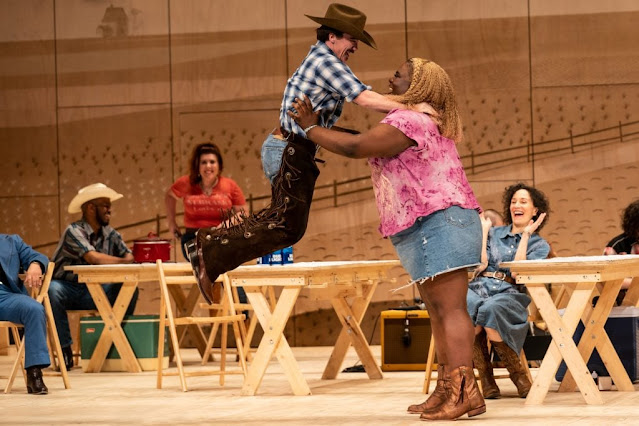 If you adore traditional takes on the smash hit musical “Oklahoma!” and are resistant to dark, edgy adaptations, you definitely want to give this one a pass. For those familiar with and tired of the hokeyness of the frontier fav that's been a high school musical staple for generations, go already. This new adaptation ingeniously adds a unsettling undercurrent, and a whole new take, without changing a tune or word of dialogue. I loved the multicultural diversity of this production, the unique casting choices of small men and big women, and the creative reimagining that doesn't just think outside the box, but invents a whole new way of packaging this show.
“Oklahoma!” opened on Broadway for the first time on my birthday, March 31st, but in 1943, a couple decades before my birth. It was the first major Richard Rodgers and Oscar Hammerstein II collaboration, and ran for an astonishing 2,000+ performances. Of course the world has changed immensely since 1943 and even more so since 1906 when the play is set. Oklahoma was still a territory awaiting imminent statehood, women's rights were unheard of, cars were a new marvel, and guns were mandatory. This revival fixes some of the dated feel of the piece with modern costume choices, amplified instruments on stage, a modern dance dream scene, dramatically slow line reads, full blackouts where the audience just hears dialogue, and surreal video closeups shot in real time on stage.
The perspective shift makes this firmly Laurey's story, and it's a joy to see Sasha Hutchings shine in the role. Barbara Walsh is also a standout as Aunt Eller. On the positive side, I liked the low key opening scene, where everyone is hanging out, shucking corn, drinking beer, and prepping for the party later that night. This establishes the small town vibe, personalities and relationships of the townsfolk without the usual big Broadway musical hoopla and over choreographed scenes. It's the perfect setup for what's to come, and makes the second act violence and complicity all the more jarring, because it feels more authentic to small town life both then and now. We loved the center stage placement of the musicians, as opposed to hiding them in the orchestra pit. Including the musicians as colorful, local characters seems more organic and engaging. 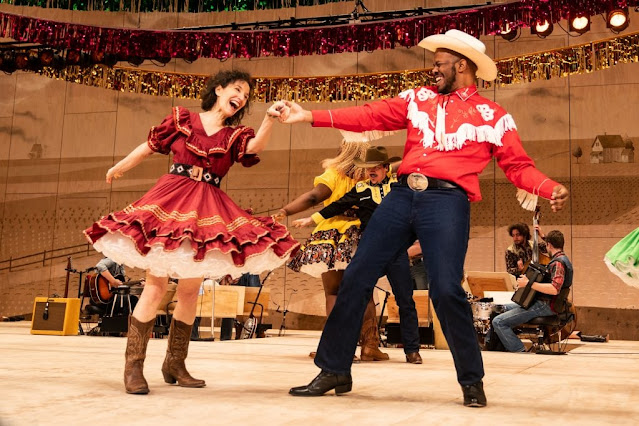 The dissonance of harsh chords, yelled lyrics, and plenty of pauses makes this revival the antithesis of the original in many ways, yet it unearths the creepy underbelly of the plot that was there all along. I have seen Oklahoma many times over the years, by professional companies and high school teens, and I always thought of it as a lighthearted comedy, period piece, with the romance of the wild frontier. This time around I was left with the sneaking suspicion that our infatuation with the innocent charm of small town America, rugged individualism, and our glorification of guns is now and always has been a thin veneer over a rotten, festering core.
I took my 18 year old daughter, who had never seen Oklahoma, to the show and she enjoyed the first act, but balked as the second act took a deep dive into a disturbing nightmare scape. She outrightly hated the dream scene, which was a solo interpretive dance more reminiscent of The Exorcist than of Rodgers & Hammerstein. The lone dancer wore a shiny nightshirt with Dream Baby Dream emblazoned across the whole front and my daughter quipped that "It looks like something from the Target deep discount rack that no-one would buy because the shirt's ugly and the saying's huge and stupid." But, hey. Maybe that's the point. 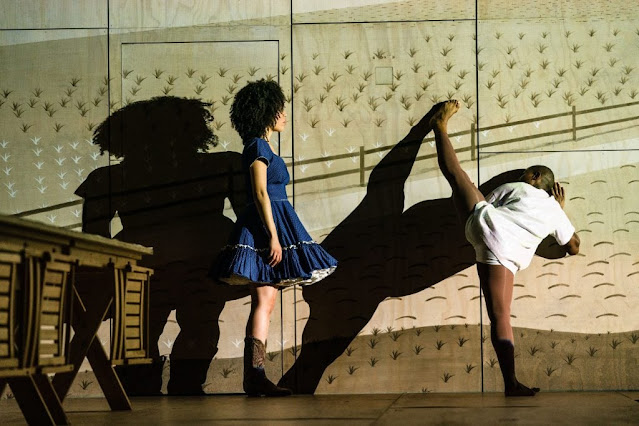 On a more positive note, I've rarely seen so much post show conversation happening, and isn't that really a core part of the social element of theatre arts? In addition to entertainment, theatre has the unique power to make people think, expose our hypocrisy as a society, and create empathy and even change. Love it or hate it, Daniel Fish's Oklahoma sparks dialogue exceedingly well.
In some ways this new Daniel Fish take is the perfect Broadway musical for our times. Our post-covid world, and particularly the rural southwest, is sick, bitter, broken, and more misinformed, impoverished, and mistrusting of outsiders than ever. Maybe the big takeaway is that basic human nature hasn't changed all that much in the past century. Then and now, beneath the patriotic Americana of line dancing locals in cowboy hats, lies a roiling, ugly underbelly that shouldn't be romanticized or even worse, ignored. 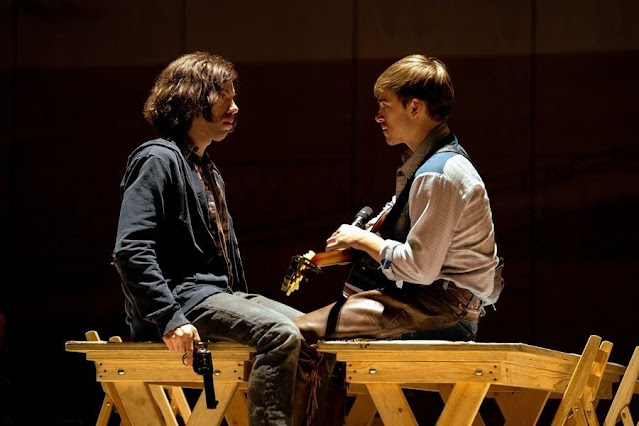 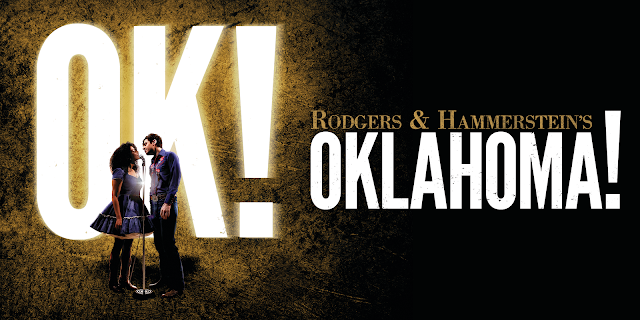 Broadway In Chicago is delighted to announce the opening of Rodgers & Hammerstein’s OKLAHOMA! The critically acclaimed, Tony Award-winning production of Rodgers & Hammerstein’s OKLAHOMA! will play Broadway In Chicago’s CIBC Theatre (18 W. Monroe St.) for a limited engagement. Tickets are on sale now for performances through January 23 at  www.BroadwayInChicago.com.

Directed by Daniel Fish, this is OKLAHOMA! as you’ve never seen or heard it before—reimagined for the 21st Century, and now the Tony Award winner for Best Revival of a Musical.

Direct from an acclaimed run on Broadway comes an OKLAHOMA! that looks and sounds like America today. The Daily Beast raves “Forget your traditional idea of OKLAHOMA!. Daniel Fish’s daring, utterly absorbing re-interpretation is different—brilliantly so.”

OKLAHOMA! tells a story of a community banding together against an outsider, and the frontier life that shaped America. Upending the sunny romance of a farmer and a cowpoke, this production “lets us experience Rodgers and Hammerstein’s greatness anew.” (The New Yorker). Without changing a word of text, this visionary production allows the classic musical – and our country – to be seen in a whole new light.

“This is the OKLAHOMA! that was there all along.” (New York Magazine).

OKLAHOMA! features music by Richard Rodgers and a book and lyrics by Oscar Hammerstein II, based on the play Green Grow the Lilacs by Lynn Riggs, with original dances by Agnes de Mille.

Individual tickets for Rodgers & Hammerstein’s OKLAHOMA! are on sale now and range from $27 to $98 with a select number of premium tickets available. Tickets are available now for groups of 10 or more by calling Broadway In Chicago Group Sales at (312) 977-1710 or emailing GroupSales@BroadwayInChicago.com. For more  information, visit www.BroadwayInChicago.com.

Audience members are required to be masked and show proof that they are fully vaccinated. Those with exemptions, including children, must show proof of a negative COVID-19 test. Vaccine cards and negative COVID-19 test must be shown along with a photo I.D. and valid ticket. No home tests are accepted and due to COVID-19 protocol, children under 2 are not allowed into the theatre. No food or beverages will be served or allowed in the theatre. For further information including types of vaccines or testing details visit BroadwayInChicago.com/COVID19.

Posted by Bonnie Kenaz-Mara at 6:29 PM