Here at ChiIL Mama, we can't wait to catch Manual Cinema's Christmas Carol. We'll be gathering the family and reviewing this Sunday night. It's a brand new world premiere production streaming LIVE each night of the run with a q & a following. We've seen almost all of their productions since their inception in 2010 and they are mind blowing! In covid times it's been tough on the theatre industry, as everyone scrambles to pivot to streaming until it's not deadly to meet in person again. Manual Cinema is one of the best suited to this new hybrid medium since they're already working in projection and their art form and style translates well to the screen. Don't miss this. They're a long time favorite of ours and we're so excited that audiences beyond their home town of Chicago now have equal access to their stellar storytelling.

Manual Cinema, the Chicago-based interdisciplinary performance collective, premieres its all-new adaptation of the most famous holiday tale of all time December 3-20, 2020 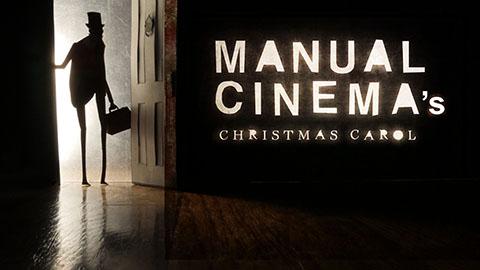 Each show will be performed live in Manual Cinema’s Chicago studio in a socially distanced manner, and live streamed directly to audiences at home by Marquee TV (marquee.tv) – the foremost digital deliverer for performing arts content. In signature Manual Cinema style, hundreds of paper puppets, miniatures, silhouettes and a live original score come together for an imaginative reincarnation of Dickens’s holiday classic. 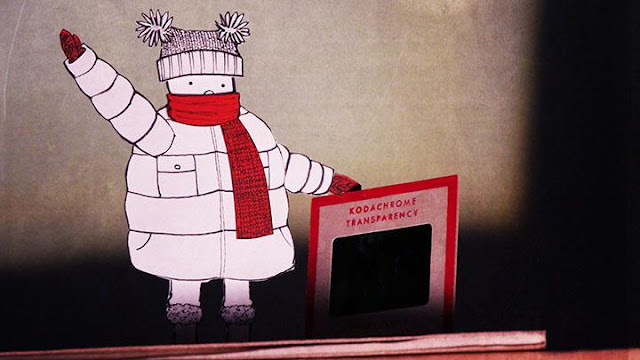 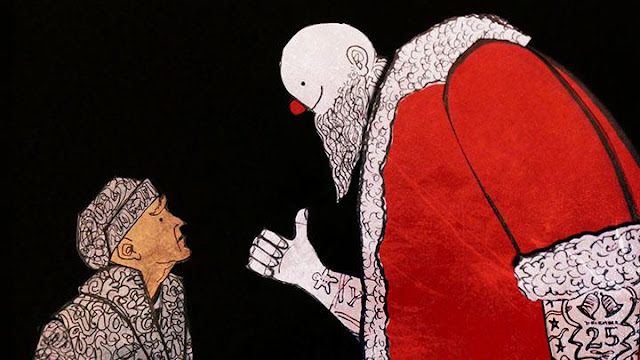 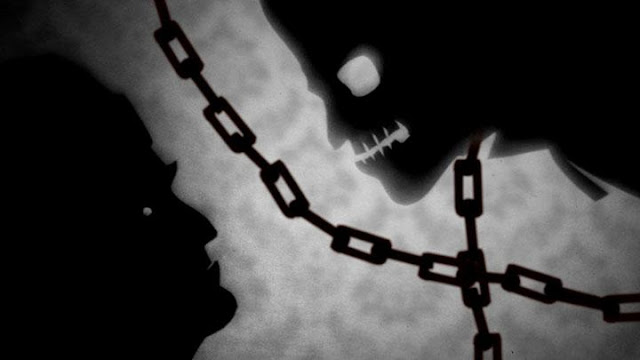 Tickets are now on sale for the world premiere of Manual Cinema’s Christmas Carol, a live streaming adaption of Charles Dickens’s holiday classic created specifically for the 2020 holiday season. 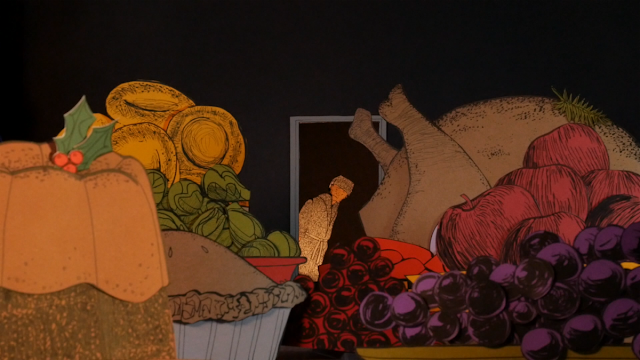 Manual Cinema, the Chicago-based interdisciplinary performance collective, will present the most famous holiday tale of all time December 3-20, 2020. Each show will be performed live in Manual Cinema’s Chicago studio in a socially distanced manner, and live streamed directly to audiences at home by Marquee TV (marquee.tv) – the foremost digital deliverer for performing arts content.

In signature Manual Cinema style, hundreds of paper puppets, miniatures, silhouettes and a live original score come together for an imaginative reincarnation of Dickens’s holiday classic. 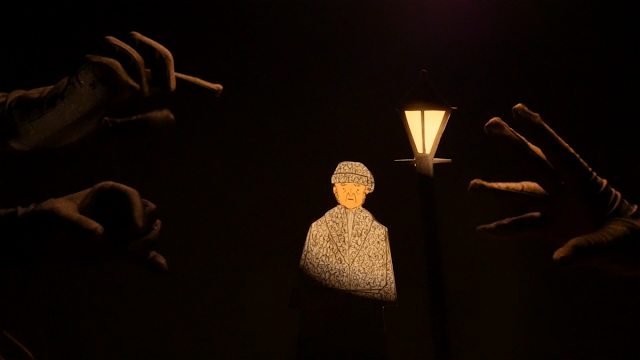 Aunt Trudy, an avowed holiday skeptic, has been recruited to channel her late husband Joe’s famous Christmas cheer. From the isolation of her studio apartment, Trudy reconstructs Joe’s annual Christmas Carol puppet show over Zoom while the family celebrates Christmas Eve under lockdown. But as Trudy becomes more absorbed in her own version of the story, the puppets take on a life of their own, and the family’s call transforms into a stunning cinematic retelling of Dickens’s classic ghost story. 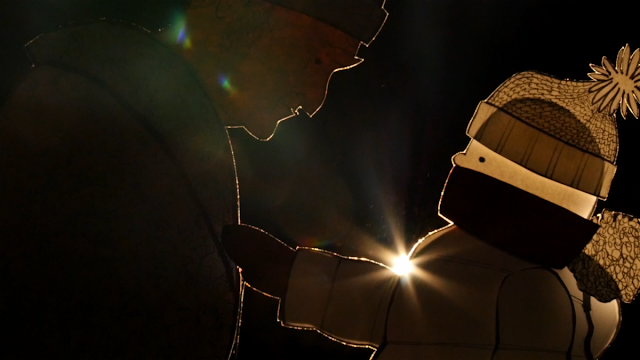 Scrooge and Ghost of Christmas Past

Tickets to live streamed performances of Manual Cinema’s Christmas Carol are on sale now at manualcinema.com. Regular ticket prices are $15-$50: $15 (individual), $30 (duo or trio, 2-3 viewers) and $50 (family and friends, 4+ viewers). $100 tickets are also on sale for patrons who wish to support Manual Cinema. Closed-caption (for patrons who are deaf or hard of hearing) and audio-described (for patrons who are blind or have low vision) tickets will be available December 9-20 for $10. 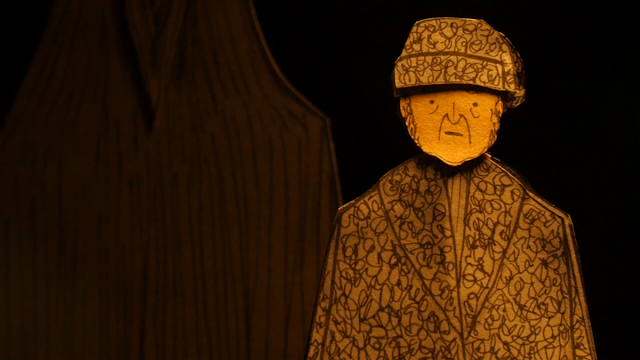 Ghost of Christmas Future and Scrooge

Since each show is performed live, patrons pick a show date and time and purchase a ticket, same as always.

Before each show, all audience members will receive an email with a private URL to access and stream their chosen performance. After each performance, audiences will have the opportunity to ask Manual Cinema’s artists questions live and in real time via a post-show “Puppet Time” live chat. 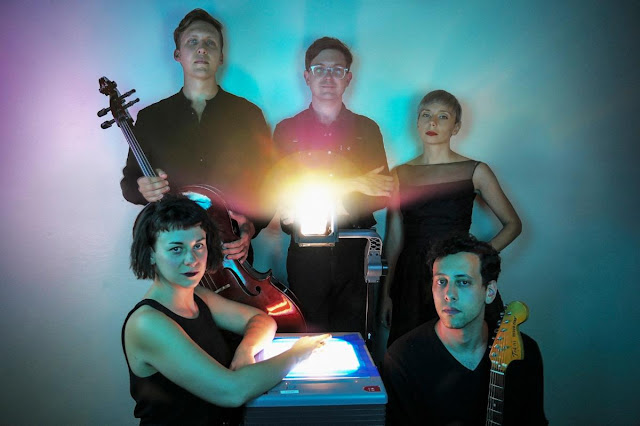 To create their adaptation of A Christmas Carol, Manual Cinema has been actively seeking commissioning and presenting venues around the country. The idea is to help replenish Manual Cinema’s primary source of income – touring – while also offering a prescient work created for the times to its presenting partners and their audiences during this unprecedented time.

“Chicagoans of the Year: Directors of Manual Cinema have created a whole new art form”

“This Chicago troupe is conjuring phantasms to die for…”

Since its founding in 2010, Manual Cinema has been turning heads in Chicago and around the globe for a decade, combining handmade shadow puppetry, cinematic techniques, and innovative sound and music to create immersive visual stories for stage and screen.

In addition to A Christmas Carol, upcoming projects include the debut of their shadow animations in the film remake of Candyman, directed by Nia DaCosta and produced by Academy Award-winner Jordan Peele’s Monkeypaw Productions, slated to open in theaters in 2021.

Manual Cinema is also creating an adaptation of two Mo Willems’ children’s books, Leonardo, the Terrible Monster and Sam, the Most Scaredy-cat Kid in the Whole World, premiering at the Kennedy Center in Washington, D.C. followed by a Chicago premiere with Chicago Children’s Theatre in spring 2021.

In August, the company threw a month-long virtual birthday party, Manual Cinema’s 10th Anniversary Retrospectacular!, streaming four of the company’s most seminal shows from the past 10 years. Lula Del Ray, The End of TV, No Blue Memories: The Life of Gwendolyn Brooks and Frankenstein were all presented for free, on demand viewing on multi-camera, high-definition video in their entirety. The 10th anniversary celebration culminated with the live, online world premiere of Dream Delivery Service, Manual Cinema’s first socially distanced performance made exclusively for live streaming.

Manual Cinema was ensemble-in-residence at the University of Chicago in the Theater and Performance Studies program in the fall of 2012, where they taught as adjunct faculty. They were an ensemble in residence at the University of Colorado, Colorado Springs in partnership with the Public Theatre in winter 2019. They lead the Catapult: Professional Training Workshop with the Chicago International Puppet Theatre Festival and the Poetry Foundation during spring 2018.

Manual Cinema has taught workshops at the School of the Art Institute Chicago, The Future of Storytelling Conference (NYC), Stanford University, Yale University, Puppeteers of America: Puppet Festival (R)evolution, the Chicago Parks District, and many other theaters and universities around the country. The company offers extensive workshops and education opportunities as part of its touring engagements.

In Fall 2016, Manual Cinema contributed visuals, music, and sound design for an immersive adaptation of Peter Pan with producer Randy Weiner (Sleep No More, The Donkey Show, Queen of the Night) which premiered in Beijing in December 2016. The company was awarded an Emmy Award in 2017 for “The Forger,” a video created for The New York Times. In summer 2018 Manual Cinema premiered and self-produced a sold-out run of The End of TV at Chopin Theatre, which was quickly followed by its world premiere adaptation of Mary Shelley’s Frankenstein at Chicago’s Court Theatre. By year’s end, the Chicago Tribune named Manual Cinema Chicago Artists of the Year in 2018. Frankenstein subsequently had its New York City premiere in January 2019 at The Public Theatre’s Under the Radar Festival.

Posted by Bonnie Kenaz-Mara at 3:30 PM