REVIEW: Short Shakespeare! The Comedy of Errors at Chicago Shakespeare Theater Through February 29, 2020

SHORT SHAKESPEARE!
THE COMEDY OF ERRORS
75-minute comedy is perfect introduction to Shakespeare for audiences of all ages 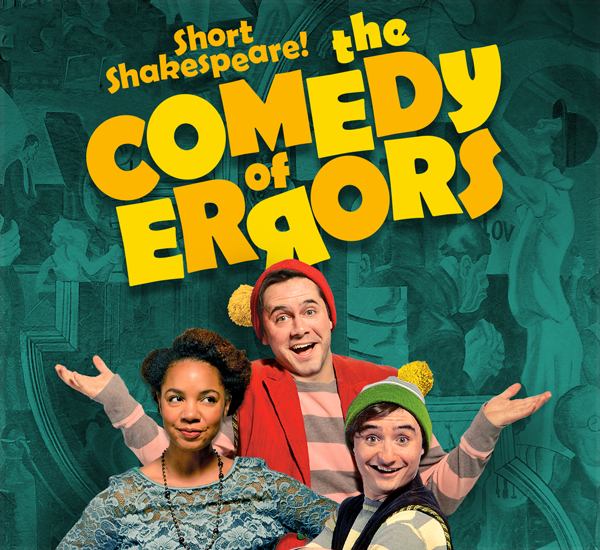 What a gift it was to enjoy Short Shakespeare! The Comedy of Errors from a cast that was so clearly connected to each other, the material, and the audience. Deftly adapted by David H. Bell, the 75-minute rendition felt complete and engaged our audience of children and adults from pre-show antics to closing bows. 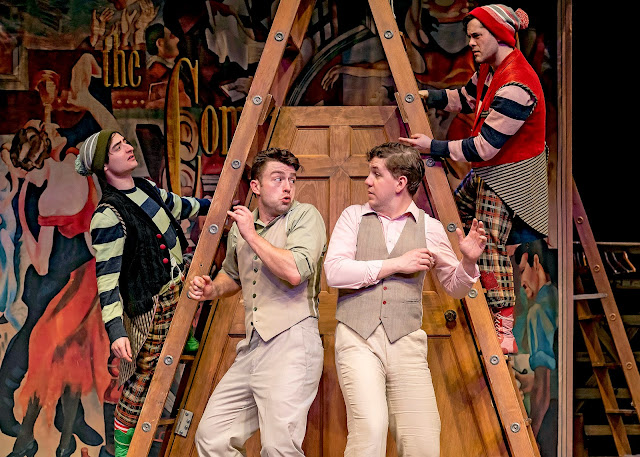 Directed originally by Bell and on this stage by Eli Newell, the talented cast helped us understand and enjoy The Bard, with many moments of bated breath and uproarious laughter. There was not a single weak link in costuming, lighting, set, sound, or performance. 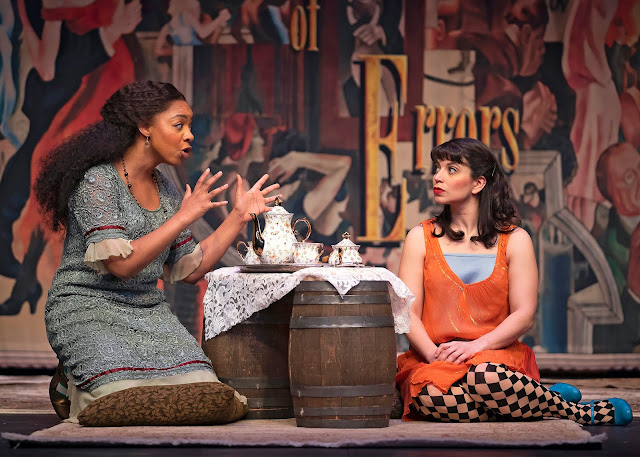 Adriana (Nora Carroll, at left) shares a moment with her sister Luciana (Phoebe González, at right) before mistaken identities threaten to pull them apart.

Shakespeare being a product of his time, there is plenty of sexism and gender conformity built into the play, but Nora Carroll as an Adriana, Lillian Castillo as both Amelia and an empowered sex worker of a courtesan, and Phoebe González as Luciana all inhabit their roles and interpret their lines with such power that I could be convinced the Bard had a feminist bent.

The two sets of twins and the rest of the versatile cast, including the lusty kitchen wench Luce who chases her mate’s lookalike all over the theater to much hilarity, make every moment of the play perfect. As a bonus, it’s set in the WPA era with back story and costume to match—a fun shift for Shakespeare. 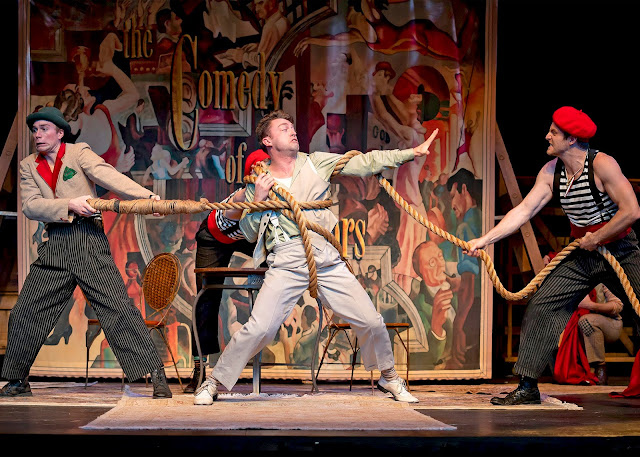 In short, whether you’re young or old, a Shakespeare newbie or seasoned connoisseur, get thee to the Chicago Shakespeare Theater. This new take on an old goodie will not disappoint. 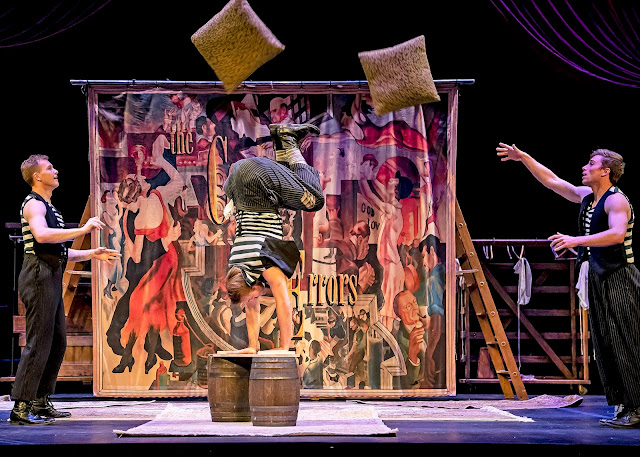 
SHORT SHAKESPEARE!
THE COMEDY OF ERRORS

Chicago Shakespeare Theater invites audiences to spend their Saturday with Shakespeare in this cleverly abridged, 75-minute production of Short Shakespeare! The Comedy of Errors on Saturdays at 11:00am, January 25–February 29, 2020 in The Yard at Chicago Shakespeare. Filled to the brim with acrobatics and mayhem, the hilarity and hijinks of Shakespeare's comedy are larger-than-life in this vibrant and fast-paced production, making it the perfect introduction to Shakespeare for audiences of all ages. 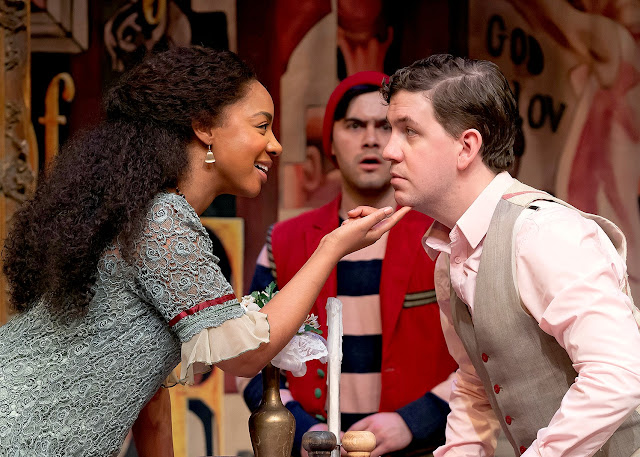 Short Shakespeare! The Comedy of Errors is directed by Eli Newell, with adaptation and original direction by David H. Bell. After each performance, the actors remain on stage for a question-and-answer session before joining the audience in the Lobby to mingle and take photos. Tickets start at just $24 for students ages 18 and under.

The story unfolds when Antipholus and his lifelong companion Dromio find themselves in Ephesus as they search the world over for a twin, lost in infancy. Everywhere they go in this foreign land, complete strangers insist that they’re best of friends. Is everyone here quite mad? Mistaken identities abound, as one bewildering day in Ephesus makes for hysterical complications—and a bewitching theatrical experience.

In addition to public performances on Saturdays, Short Shakespeare! The Comedy of Errors will welcome 30,000 students during its six-week run of weekday matinees in The Yard, followed by a two-week tour to schools across the region through March 12, 2020.

Accessible performances for Short Shakespeare! The Comedy of Errors include:

Audio-described Performance – Saturday, February 8, 2020 at 11:00am
A program that enables patrons who are blind or have low vision to more fully experience live performances by providing spoken narration of a play’s key visual elements.

ASL Duo-interpreted Performance – Saturday, February 22, 2020 at 11:00am
All dialogue and lyrics are translated into American Sign Language by two certified interpreters.

Open-captioned Performances – Saturday, February 22, 2020 at 11:00am
A text display of the words and sounds heard during a play, synced live with the action onstage.

Short Shakespeare! The Comedy of Errors will be presented on Saturdays at 11:00am from January 25–February 29, 2020 in The Yard at Chicago Shakespeare, Single tickets ($24 for audience members age 18 and under; $36 for adults) are on sale now. Special discounts will be available for groups of 10 or more. For more information or to purchase tickets, contact Chicago Shakespeare Theater’s Box Office at 312.595.5600 or visit the Theater’s website at www.chicagoshakes.com. 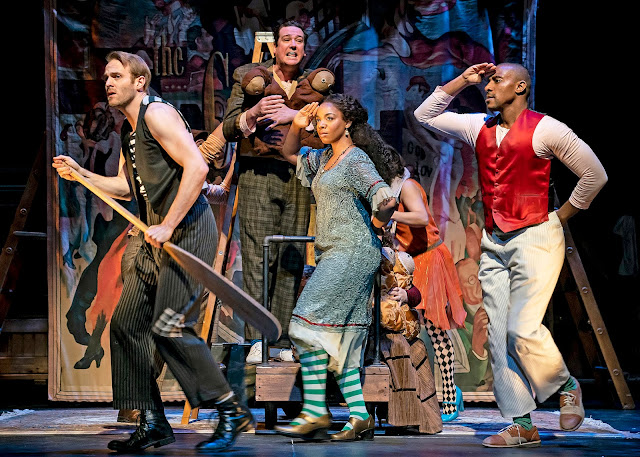 Clutching his twin sons, Egeon (Drew Shirley, at center) fears for his life during a storm at sea as the crew (from left to right: Dan Plehal, Nora Carroll, Laurence Stepney) abandon ship


ABOUT CHICAGO SHAKESPEARE THEATER
Under the leadership of Artistic Director Barbara Gaines and Executive Director Criss Henderson, Chicago Shakespeare has redefined what a great American Shakespeare theater can be—a company that defies theatrical category. This Regional Tony Award-winning theater’s year-round season features as many as twenty productions and 650 performances—including plays, musicals, world premieres, family programming, and presentations from around the globe. Chicago Shakespeare is the city’s leading presenter of international work, and has toured its own productions across five continents. The Theater’s nationally acclaimed arts in literacy programs support the work of teachers, and bring Shakespeare to life on stage for tens of thousands of students annually. Each summer, the company tours a free professional production to neighborhood parks across Chicago. In 2017 the Theater unveiled The Yard, which, together with the Jentes Family Courtyard Theater and the Thoma Theater Upstairs, positions Chicago Shakespeare as Chicago’s most versatile performing arts center. 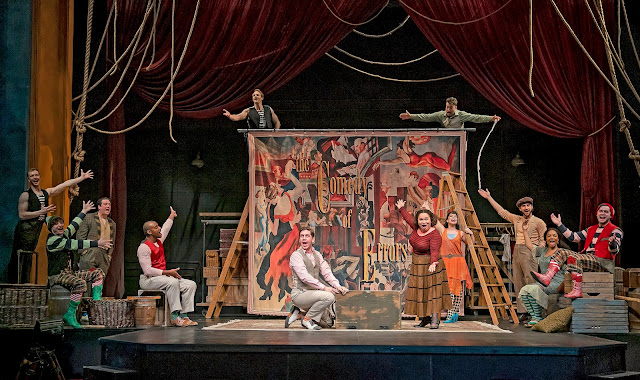 A company of traveling players comes together to present Shakespeare’s riotous comedy  in Chicago Shakespeare’s 75-minute abridged production of Short Shakespeare! The Comedy of Errors, directed by Eli Newell with adaptation and original direction by David H. Bell, on Saturdays at 11:00am, January 25–February 29, 2020. Photo by Liz Lauren.

Posted by Bonnie Kenaz-Mara at 5:37 PM