An Original Sketch Show that is Written by Kids,  Performed by Grownups, and Enjoyed by Humans 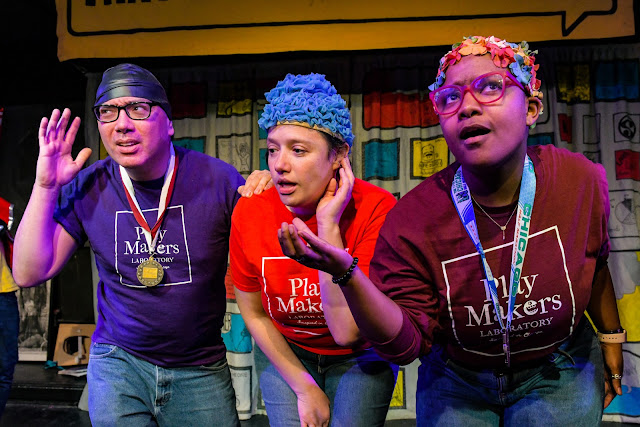 “It’s better than online dating or doing your taxes!”
---opening of the Barrel of Monkeys/PlayMakers Laboratory show

(Now known as PlayMakers Laboratory, Barrel of Monkeys is more fun to say...but I wasn’t consulted…)

Now in its 18th year, THAT’S WEIRD, GRANDMA performances are inspired from creative writing workshops held in Chicago Public Schools by professional actors who take kids’ wacky ideas and set them to music and create crazy sketches. Shows are first performed in schools for the young authors, then are shared with the public at the Neo-Futurist Theater at 5153 N. Ashland. Like most improv, the scenes are very hit-or-miss, but the ones that are truly funny are absolutely hysterical and inspired.

The original thoughts could only come from school children. It’s difficult to imagine a grown-up repeating that they “do NOT want to go to George Washington’s house!” “I do not want to go to his house!” “I don’t want manners!” “Do you have to like someone just because they are the President?” (Ok, I know a LOT of adults who actually wonder about that, especially in the last three years. Fair.) 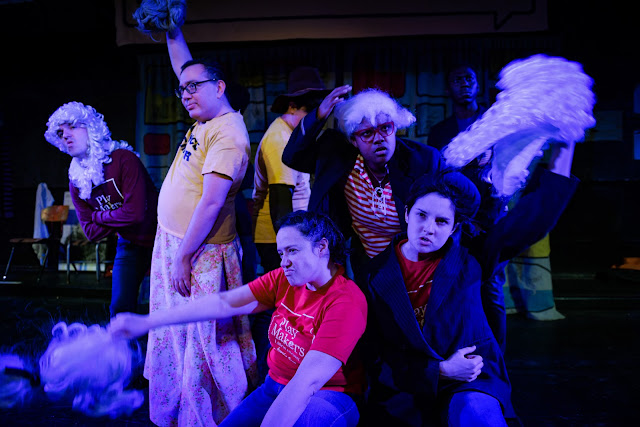 The theme for the current show is Travels Through Time. An “Audience Member,” identified by his t-shirt that read “Audience Member,” was pulled from the audience to participate---luckily, he happened to have a “Flux Capacitor” on him (fun Back to the Future reference) to enable the time machine to activate! How lucky was that?! 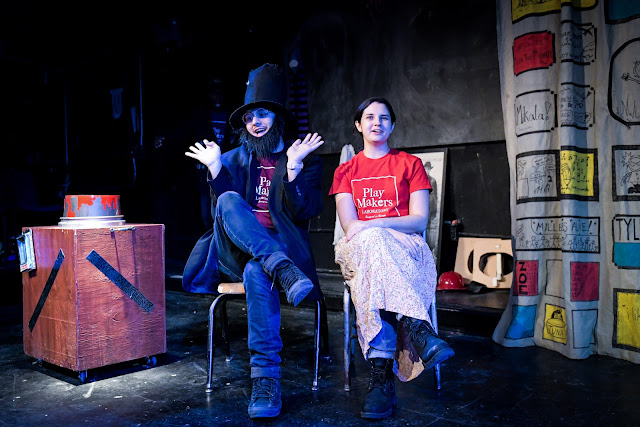 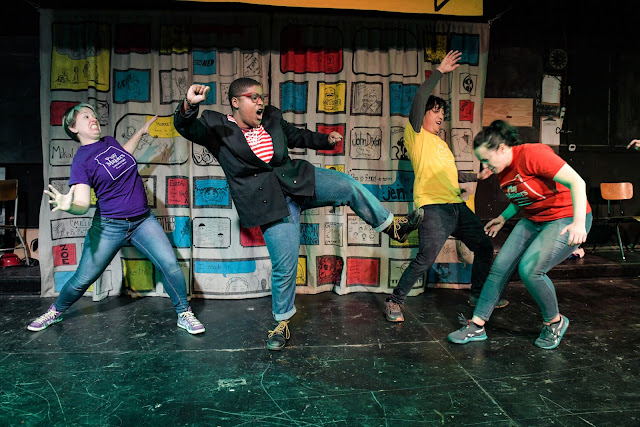 Sketches run from Malcolm X fighting zombies, featuring the awesome line: “When your mind is a weapon, you are never unarmed!” to finding a child’s grave while “digging for treasure” and becoming cursed from the deceased. Some of the jokes are so quick and clever, it’s hard to keep track of them all. In one sketch, a couple had 8 babies, which were “conceived” by the two actors hilariously wagginging their tongues at each other and making gurgling noises. Single doll babies were tossed into the arms of the “mom,” for the first few, until a “bundle of babies” duct-taped together all appeared to add up to eight. 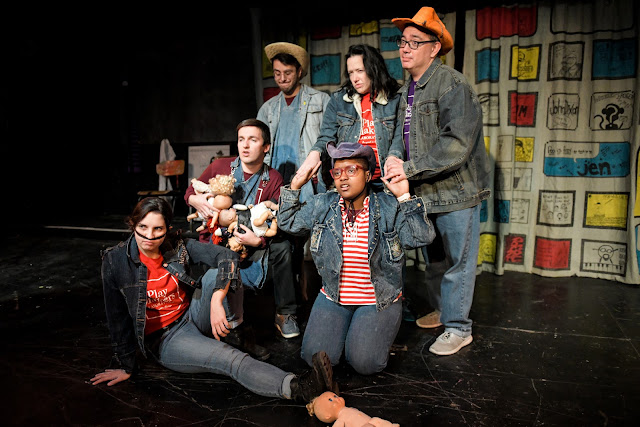 Two of the most clever sketches were “Lazy Jenny” and "Pizza People. Actress Mary Tilden manages to make this scenario about a girl who never leaves her house absurdly funny! The “Pizza People” from the US Olympic swim team who prove “you are what you eat” were another standout. 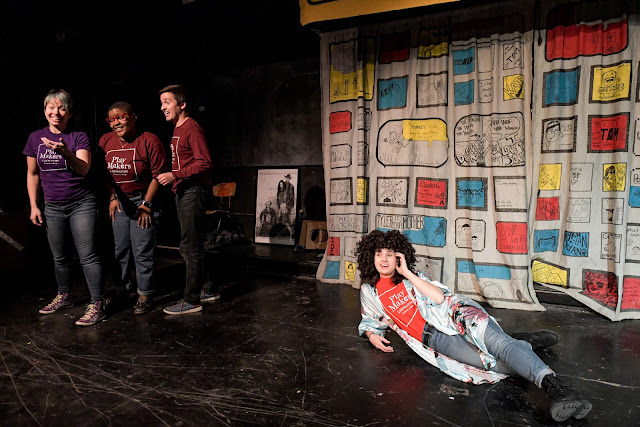 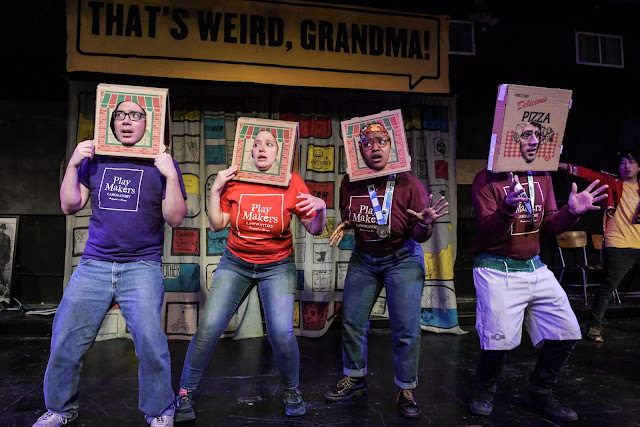 Kids’ universal desire to be super heroes was the basis for another clever sketch as two boys prayed their thanks before dinner yet kept asking God for super hero traits, to their father’s growing consternation. They also thanked the Lord for things like “plastic” and “wool and other textiles.”

The sketch that nearly made us cry from laughter involved a mad scientist who was creating an evil robot. He keeps being thwarted by three clowns/mimes who undermine him. (undermime him??) Taylor Galloway was an absolute hoot as the crazy scientist with his beeping machines and over-the-top sound effects and reactions.

After the talented cast finished, audience members are asked to vote for their two favorite sketches they “can’t live without.” It was tough to narrow our choices down to only two. The winning sketches are kept in the show for the next rotation. Each performance changes, so it would be fun to see what the show looks like at the end of the run in mid-February. 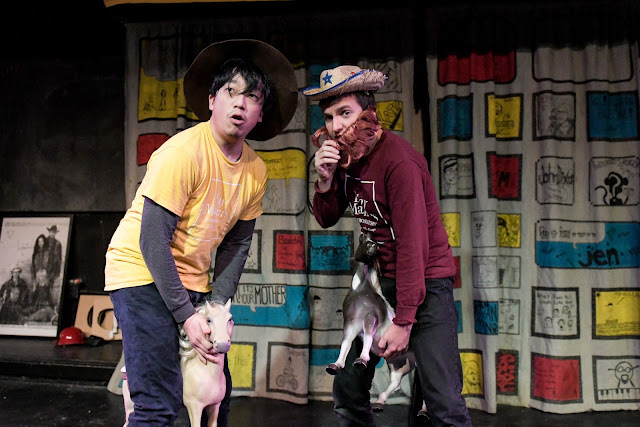 Directed by Artistic Director Brandon Cloyd, he joined the crowd in the audience and was laughing along with the rest of us. Those lucky students who have PML work with them must love having their stories brought to life. The entire crew must have a blast putting this delightful spectacle together, and it shows. Your whole family will get a kick out of this one.

Catherine Hellmann wishes for two super powers...to never need sleep and to eat anything at all and never gain an ounce... 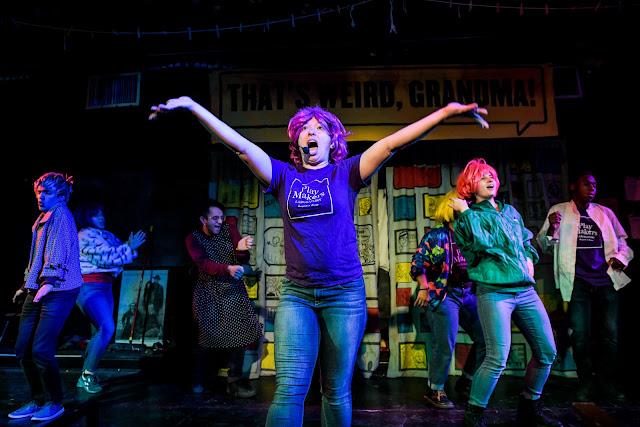 PlayMakers Laboratory, formerly Barrel of Monkeys, is pleased to continue its 2019-20 season with THAT’S WEIRD GRANDMA: Travels Through Time, directed by Artistic Director Brandon Cloyd, playing Sundays at 3 pm from January 19 – February 16, 2020 at the Neo-Futurist Theater, 5153 N. Ashland Ave. in Chicago. Tickets are currently available at www.playmakerslab.org or by calling (773) 506-7140.

Journey with PlayMakers Laboratory as Grandma takes a time machine to visit student-written stories set in the past, present and future. Can Grandma repair the space-time continuum and return to the present? With the help of PML’s students’ stories, anything is possible. 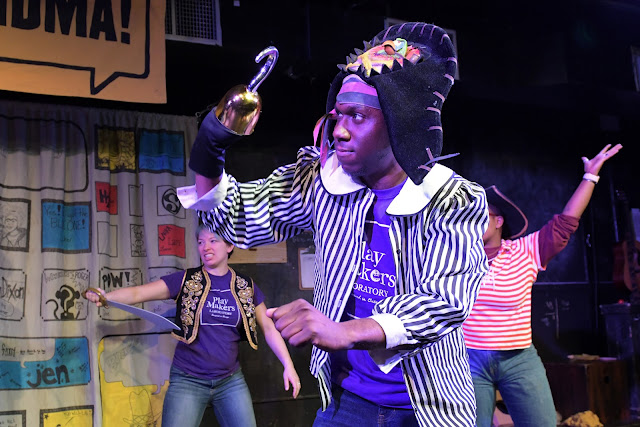 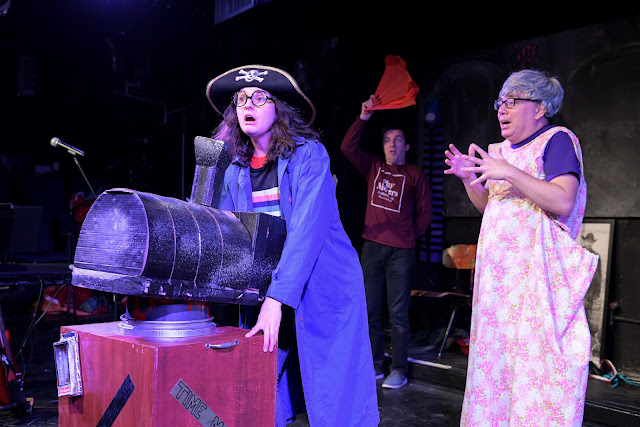 Now in its 18th year, THAT’S WEIRD, GRANDMA features adaptations of stories written during PlayMakers Laboratory’s creative writing residencies in Chicago elementary schools. PML’s ensemble of professional actors, comedians and musicians bring the young authors’ stories to life as raucous sketches, songs and movement pieces, performing first for students in their schools and then for the public. These stories – from hilarious dialogues between unlikely characters to poignant pleas for social change – resonate with adults while celebrating the imaginations of young people. Every week brings a new line-up of stories, and PML invites audiences to vote on their favorites at each performance. 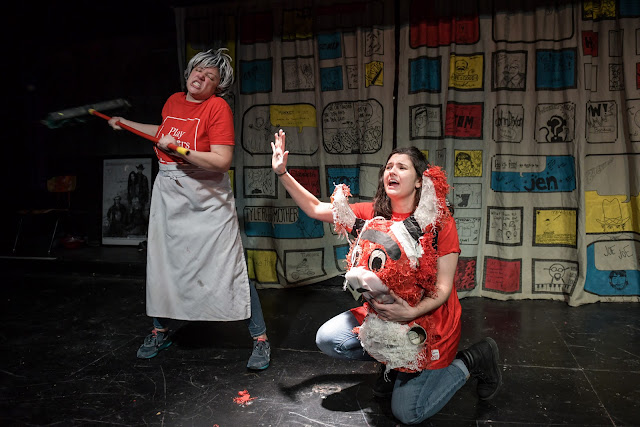 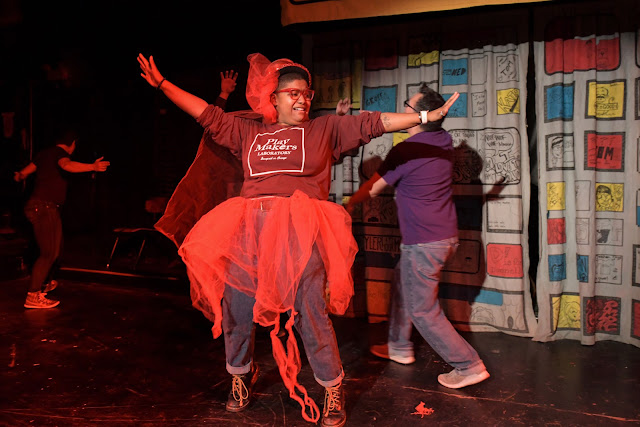 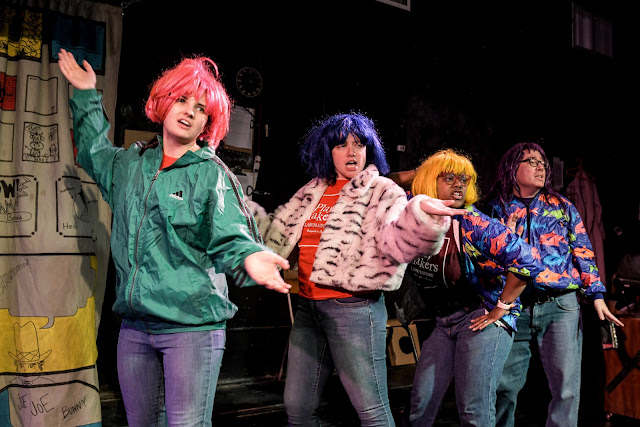 Brandon Cloyd joined PlayMakers Laboratory in 2007 and has been deeply involved in many facets of the company ever since. Prior to joining PML, Brandon graduated from Northwestern University with a Bachelor of Arts in Theatre and a minor in Business Institutions. Within PML, Brandon has served as an actor, teaching artist, lead teacher, a member of Teacher Corps, as well as directing shows for schools and public performances of That's Weird, Grandma. Before becoming the company’s Artistic Director in September 2017, Brandon served as PML After-School Program Coordinator at Loyola Park from 2014-2016 and Program Director from 2016-2017. Outside of PML, he worked as the Associate Director of Camp Echo, where he has spent 13 summers managing campers and staff at a co-ed sleep away camp in Upstate New York. Brandon has worked with other theatre companies including Urban Theatre Company, American Theater Company, Filament Theatre, InGen Productions, ACLE's Teatrino in Italy and Purple Crayon Players at Northwestern University. Brandon recently joined the Board of Directors for the League of Chicago Theatres. 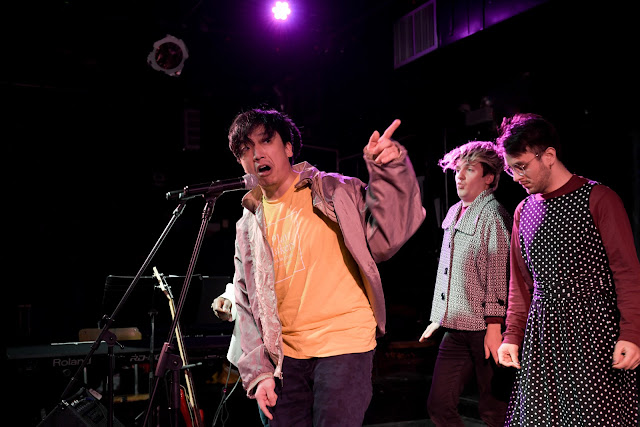 About PlayMakers Laboratory
Since PlayMakers Laboratory’s inception in 1997 as Barrel of Monkeys, its teaching artists have served more than 60 Chicago Public Schools. Over 15,000 elementary school students have participated in the PlayMakers programs, which aim to build students' writing skills, improve self-esteem, and instill confidence in their ideas and abilities.


PlayMakers Laboratory is sponsored in part by Wintrust Financial, Allscripts, Inc., Ernst and Young and Punchkick Interactive. It receives generous support from the Illinois Arts Council Agency; the National Endowment for the Arts; a CityArts Grant from the City of Chicago Department of Cultural Affairs and Special Events; the Chicago Community Trust; Crown Family Philanthropies; Alphawood Foundation of Chicago; the Maurice R. and Meta G. Gross Foundation; Polk Bros Foundation; the Richard H. Driehaus Foundation; the Robert and Isabelle Bass Foundation, Inc.; The Saints; The Topfer Family Foundation, and many other generous individuals and foundations. 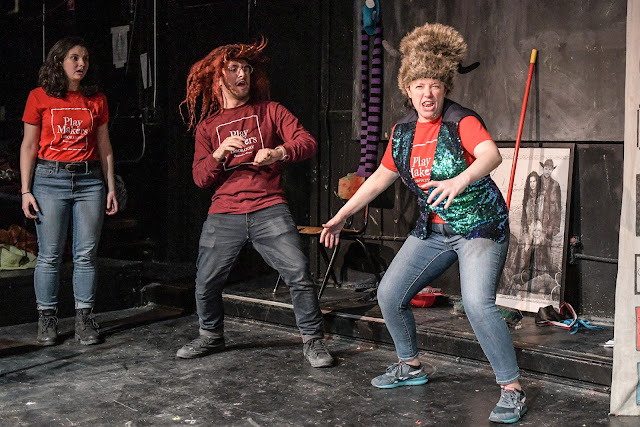 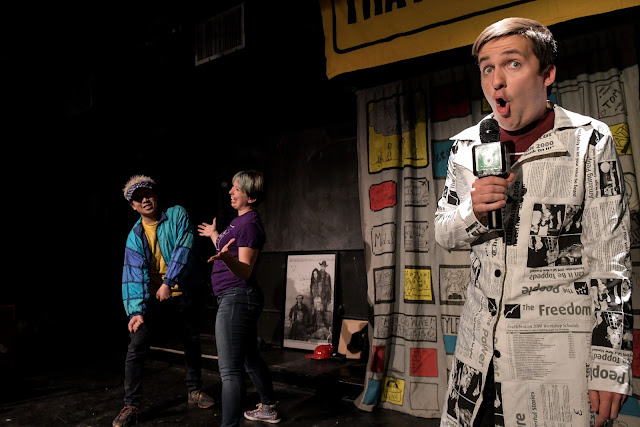 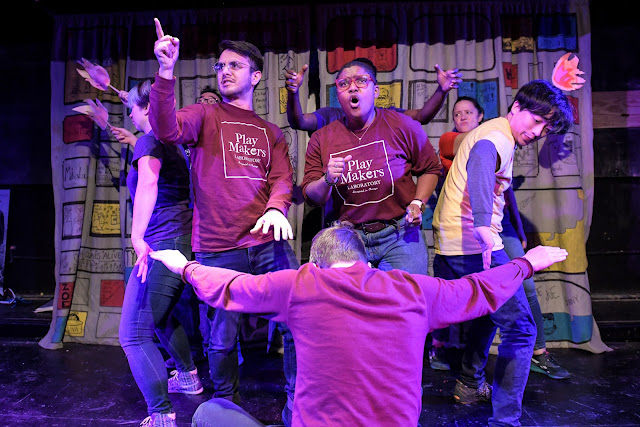