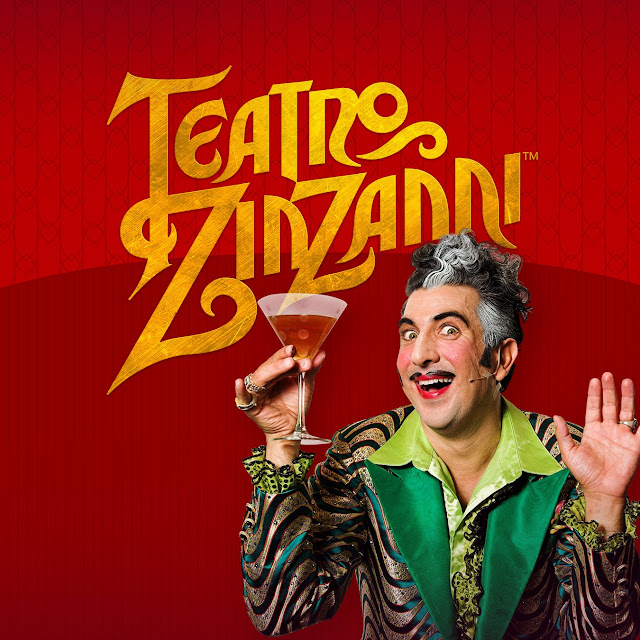 ChiIL Mama and ChiIL Live Shows, will be ChiILin' with Teatro ZinZanni for dinner, the last weekend of this month, right here in Chi, IL. Check back soon for our full review. We can't wait to check out this unique, new dining and circus experience for ourselves. If you haven't caught one of their shows yet, go already. If you have, they've released a new block of tickets through March 29, 2020 and will have new acts in after October 3rd as well. 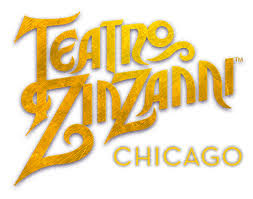 Teatro ZinZanni and Randolph Entertainment are delighted to announce that the chaos will continue as Love, Chaos & Dinner opens up a new block of tickets for its Chicago run through March 29, 2020. Teatro ZinZanni is thrilled to welcome new cast members with jaw-dropping original acts to The Spiegeltent ZaZou, a Belgian mirror tent filled with unique, historic touches, located on the 14th floor in the Cambria Hotel Chicago Loop- Theatre District (32 W. Randolph St.), starting Oct. 3, 2019. 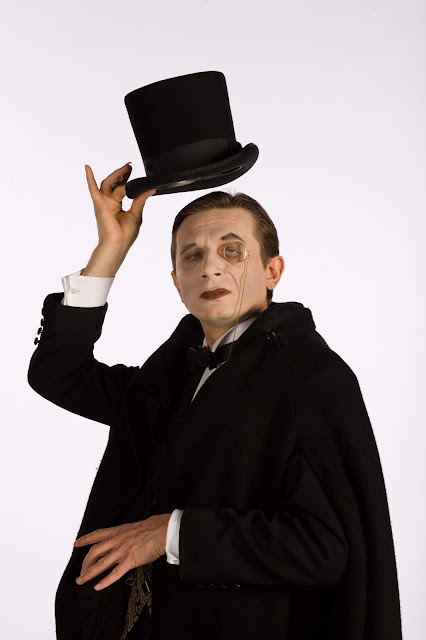 **Due to the nature of the show, we do not allow children under the age of 8. It is a three-hour evening filled with sophisticated humor, sensuality and innuendo. There is no special ticket price or menu for children. 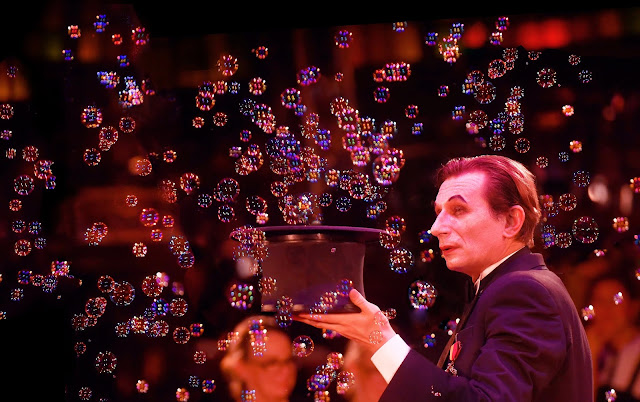 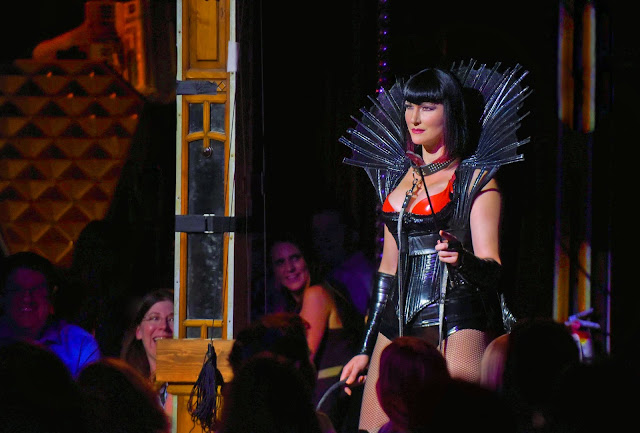 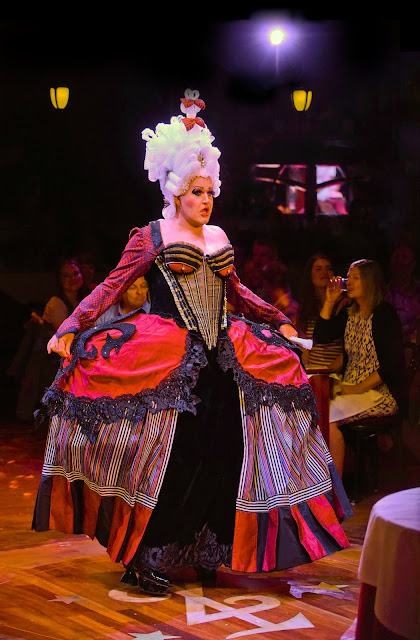 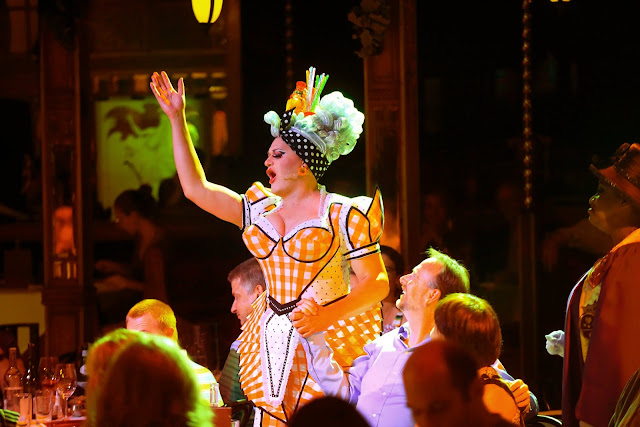 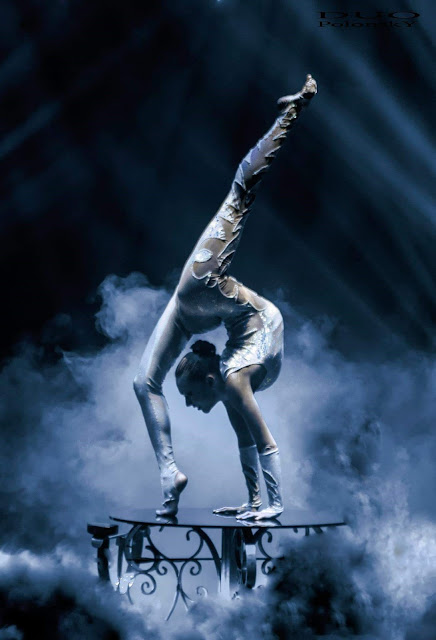 “The Goddess” Debbie Sharpe will continue to oversee the menus for private events in this stunning space. The Spiegeltent ZaZou is available to host lunches Monday through Friday and dinner on “Dark Nights.” The one-of-a-kind venue can seat up to 330 guests and is a perfect setting for corporate meetings, social events, convention hospitalities, non-profit galas, and other unique celebrations. The spacious bar and lobby area can seat groups of up to 100 guests for an elegant dinner or accommodate up to 200 guests for a cocktail reception event. 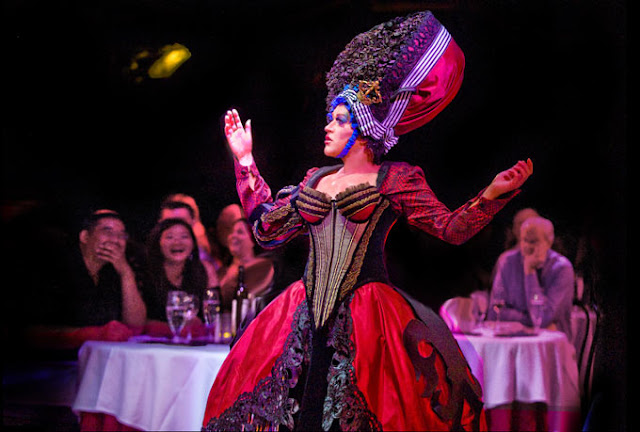 CAST BIOGRAPHIES
Kevin Kent: A physical and improvisational humorist, Kevin Kent was a member of the original cast of Teatro ZinZanni that debuted in Seattle in 1998 and again in San Francisco in 2000. To continue his streak of ZinZanni firsts, he was part of the first Teatro ZinZanni touring production in Southern California. Kevin combines his writing, odd notions, and his improvisational skills to transport the audience to exciting and wonderful places. Kevin and his partner, Joe, have a company called K. Kent Co. Performance. Their original production, Eulogy, is a memorial for a loved one, created new each night from family photos supplied by the audience. Kevin and Joe live in the mountains of Northern New Mexico. Teatro ZinZanni is their home away from home. 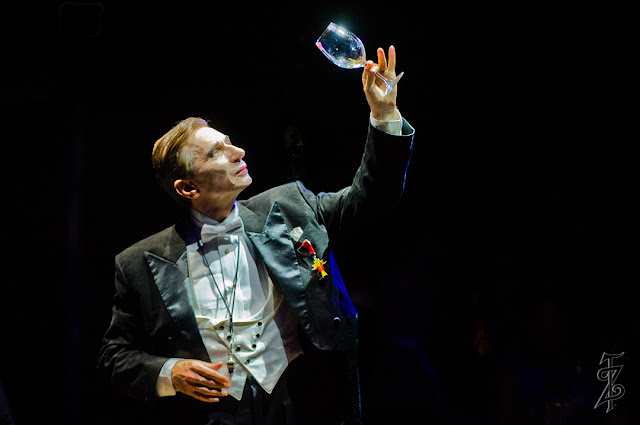 Voronin: Known throughout the world as “The Maestro,” Ukrainian-born illusionist Voronin has been described as the essence of Buster Keaton and Jacques Tati. After graduating from renowned Kiev Academy of Circus and Variety Arts and Russian University of Theater Arts, Voronin founded his own company, The Theater of Cagliostro. He is an acclaimed recipient of first place in magic competitions in Germany, Moscow, and Austria; Monte Carlo Magic Stars award, Magic Hands Grand Prix, Siegfried and Roy prize for Master Magician, and The Great Lafayette Award. Well-known in the world of magic for his unique style, director’s vision and original character creation, Voronin is one of the most sought- after stars of the European cabaret circuit. He is returning to Seattle fresh from his most recent appearance at the International Festival of Magic in Madrid, Spain. An original cast member from the 1998 Seattle premiere, this show marks Voronin’s 25th Teatro ZinZanni performance. 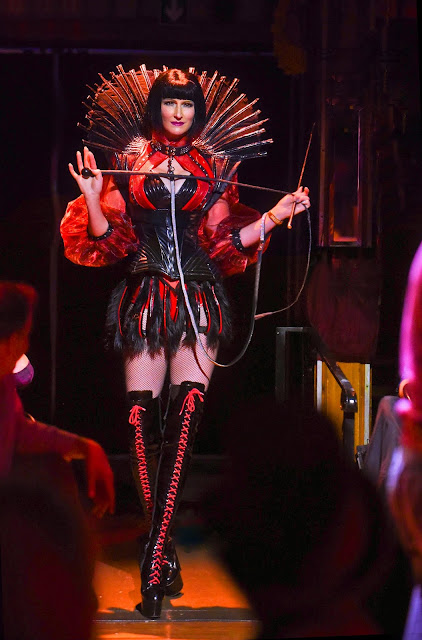 Manuela Horn: Known as the Austrian Amazon, Manuela is a yodeling, dancing and acting comedic force of nature. After small roles in independent movies and her own German children's TV show, she turned her 6' 2" height into an asset as a host for corporate events and galas across the globe. Imported from Berlin's Pomp Duck & Circumstance in 2001, Teatro ZinZanni has given her the performing home she always wanted. This is her 18th year with ZinZanni. In 2009, one of her characters, the yodeling dominatrix, made it to the semifinals of the TV show “America's Got Talent.” With an appearance in the movie “Rent,” Manuela earned her SAG membership. Manuela regularly performs in cities across Europe with other dinner cirque company’s like Palazzo, Da Capo and Teatro. Since 2010, Manuela has become “The Queen of Oktoberfest” by performing Yodel versions of popular songs. With the motto "It's always Oktoberfest Somewhere" Manuela headlines the biggest Oktoberfests across America. For more information, please visit www.manuelahorn.com or www.oktoberfestqueen.com. 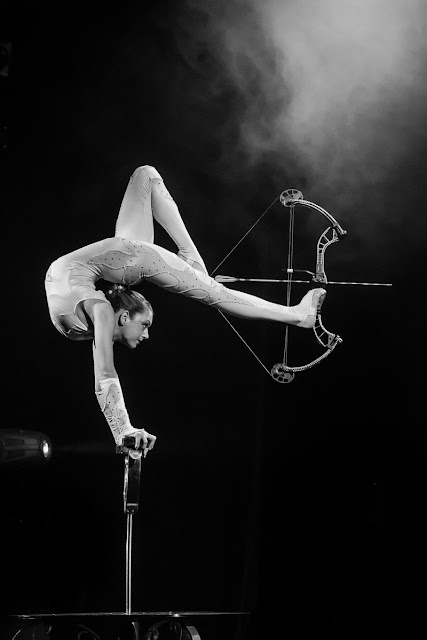 Elayne Kramer: Elayne Kramer is a sixth generation circus performer from Argentina who began training with her father at the age of four, making her debut in the ring as a contortionist at the age of seven. She has performed (and continued her training) ever since, becoming one of the top hand-balancers of her generation. Elayne has won several international circus awards, including a Bronze Clown at the International Circus Festival of Monte Carlo in 2008. She has performed all over the United States and was a featured artist in the Big Apple Circus’ 35th anniversary production, Legendarium in 2012-2013. She has also appeared on several television shows, notably The Ellen DeGeneres Show and Good Morning America. This is Elayne’s premiere run with Teatro ZinZanni and she is excited to be at this new TZ venue in Chicago and a part of this amazing cast. 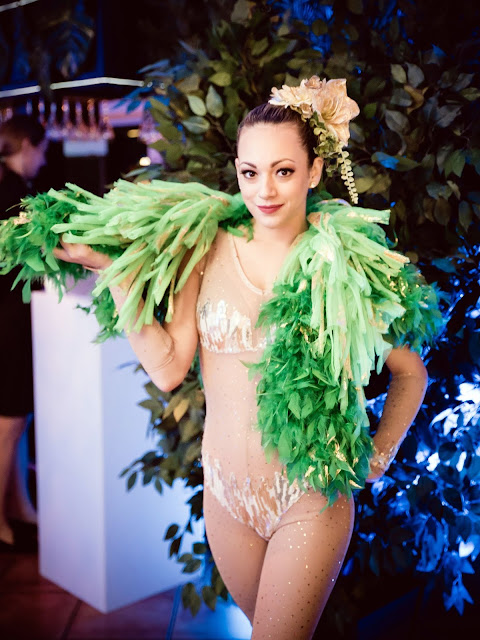 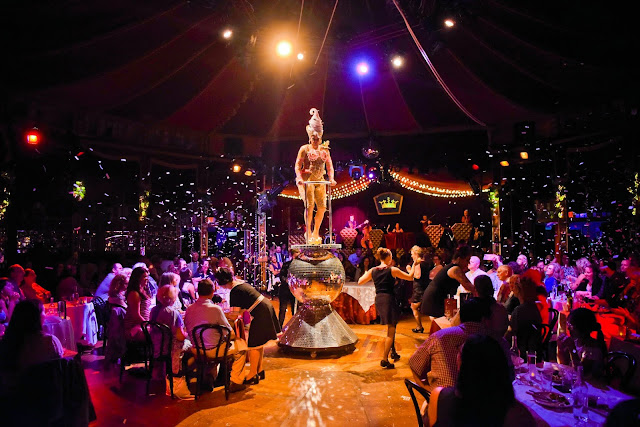 ABOUT TEATRO ZINZANNI
Teatro ZinZanni was founded in 1998 launching a wholly original new form of entertainment combining a unique fusion of cirque, comedy, cabaret, spectacle, and live music while serving up a multi-course feast. Inspired by the great cabarets of Europe, a team of creative artists and theatre professionals who have been working together for over 40 years created Teatro ZinZanni. Led by Founder Norman Langill, Teatro ZinZanni has featured celebrated artists from the worlds of cirque, clowning, cabaret, music, aerial arts, magic, and illusion. Performers over the years have included internationally recognized names like Joan Baez and Ann Wilson. The Chicago engagement is presented in the Spiegeltent ZaZou on the 14th floor in the newly opened Cambria Hotel Chicago Loop located in the Theatre District. The previously forgotten space was discovered in 2017 during the renovation of the Cambria Hotel when dropped ceilings were removed revealing the original grand space within the 1926 historic building. For more information, visit www.ZinZanni.com.

ABOUT “THE GODDESS” DEBBIE SHARPE
Two parts rock n’ roll, one part Chicago, and one sassy Aussie Debbie Sharpe is The Goddess. The Goddess got her background in rock n’ roll catering, traveling the globe and feeding some of the most influential musicians of our time including The Rolling Stones, Madonna, U2 and Fleetwood Mac. Instantly falling in love with Chicago, she got off the Paul McCartney tour bus and laid down roots in the Wicker Park – Bucktown neighborhood in 1990. Serving a colorful, globally inspired menu of creative sandwiches, vibrant salads, mix-and-match square meals, and gourmet pantry items, she opened The Goddess and Grocer in 2004 and it was an instant hit. Debbie believes in the power of community, the influence of music, and that great food brings people together.

ABOUT RANDOLPH ENTERTAINMENT
Randolph Entertainment is a partnership of some 25 people who share in the vision of bringing an extraordinary experience to Chicago. A group of mostly Chicago based individuals; the partnership is committed to being a good neighbor and contributor to Chicago’s vibrant cultural community. Stanley Feig, a veteran of the entertainment industry with a career spanning several decades, manages the partnership. 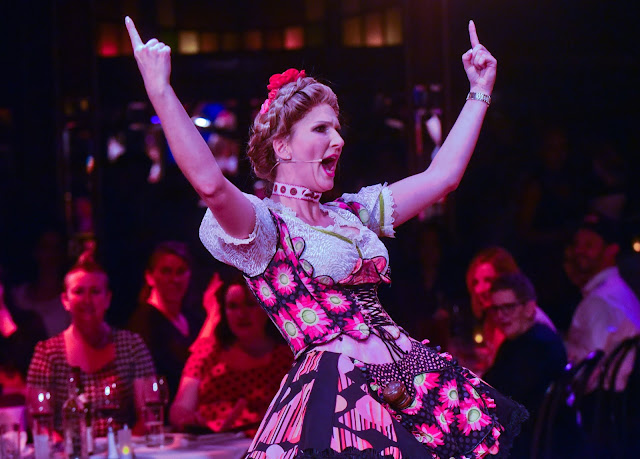 Posted by Bonnie Kenaz-Mara at 2:51 PM