REVIEW: Barrel of Monkeys Presents THAT’S WEIRD, GRANDMA: Fantastic Beasts and the Stories About Them Through August 12, 2019

ChiIL Live Shows on our radar
Now Playing Through August 12, 2019
at the Neo-Futurist Theater 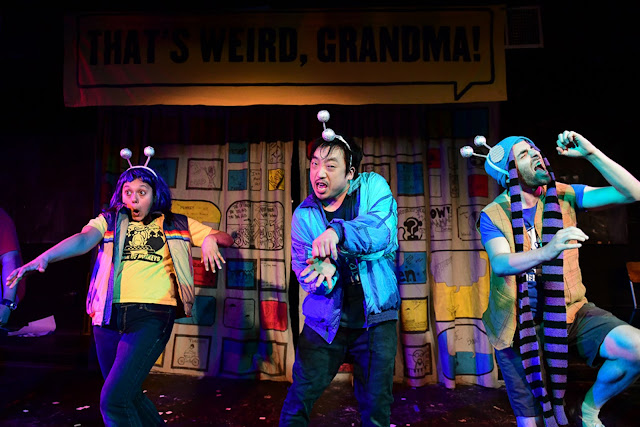 Are you a fan of absurdist theatre, the surreal, strange beasts, mythical creatures, and the unbridled creativity of kids? Then this beastly bonanza is right in your wheelhouse. You might catch The Living Toilet, a magnificent made up terror, or existing legends like Krampus and Santa, unicorns or aliens. Who knows? The audience gets to vote on their top picks and nix their least favorite scenes, so it's an ever evolving show. I must confess, I've seen Barrel of Monkeys many times over the years and THAT’S WEIRD, GRANDMA always makes me laugh. Their current critter laden lineup is no exception. 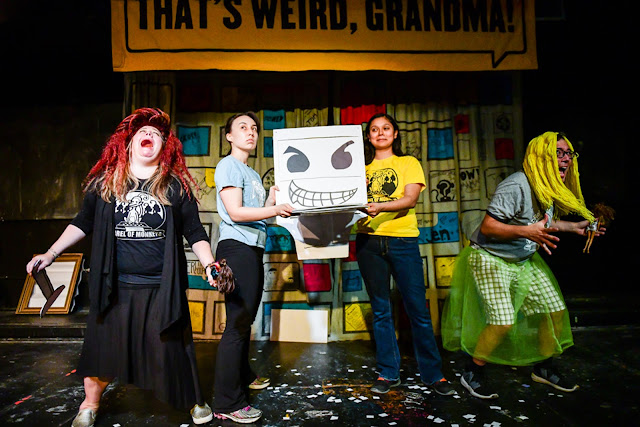 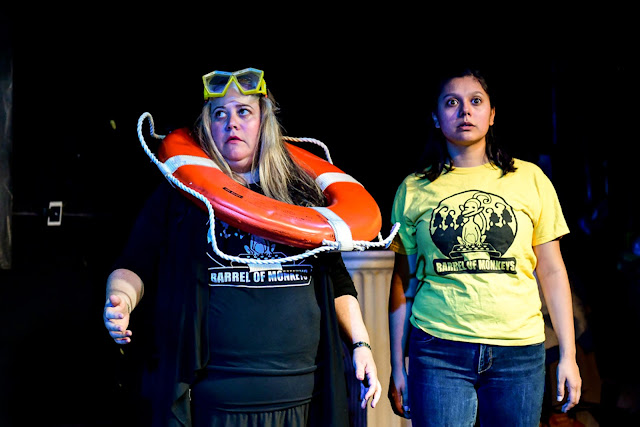 I'm a huge fan of the concept, kid written scripts presented as written, in all their wacky glory, by professional actors (AKA: big kids). Expect songs, keyboards, and loads of hilarious low tech props and costumes. This iteration, Fantastic Beasts and the Stories About Them, is only around another two Mondays, so round up a few friends and/or family members and go already. Last Monday they put on quite the show, and the adults were laughing and enjoying it every bit as much as the assortment of kids and teens.

Barrel of Monkeys is the BOM! Here at ChiIL Mama we've been fervent fans of THAT’S WEIRD GRANDMA for years. August is the perfect time to bring the whole family to check out their latest themed show, since the kiddos don't have to hustle off to school early Tuesday morning. Shows run Mondays only, from 8-9pm. Don't miss this. 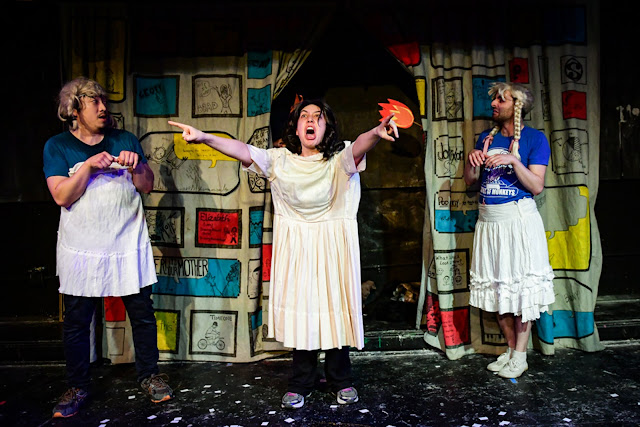 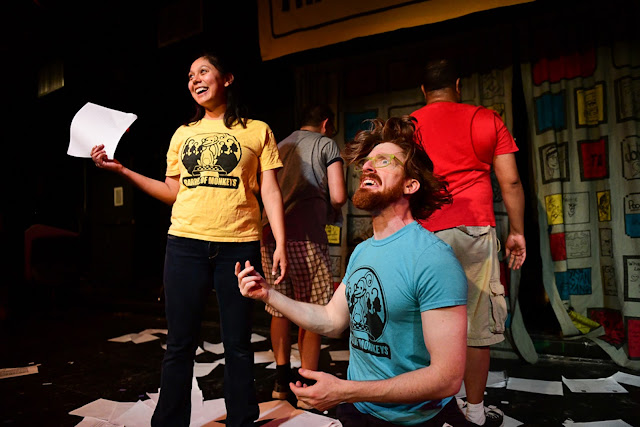 
THAT’S WEIRD GRANDMA:
Fantastic Beasts and the Stories About Them

Barrel of Monkeys is pleased to conclude its 2019-20 season with THAT’S WEIRD GRANDMA: Fantastic Beasts and the Stories About Them, directed by Artistic Director Brandon Cloyd (June 24 – July 15) and company member Nick Hart (July 22 – August 12) playing Mondays at 8 pm from June 24 – August 12, 2019 at the Neo-Futurist Theater, 5153 N. Ashland Ave. in Chicago. Tickets are currently available at www.barrelofmonkeys.org or by calling (773) 506-7140.

Meet the strange and wonderful creatures created by Barrel of Monkeys students, from talking animals to intergalactic lifeforms. BOM performers bring these beings to life through song, dance and ridiculous costumes in the company’s lauded original sketch show. 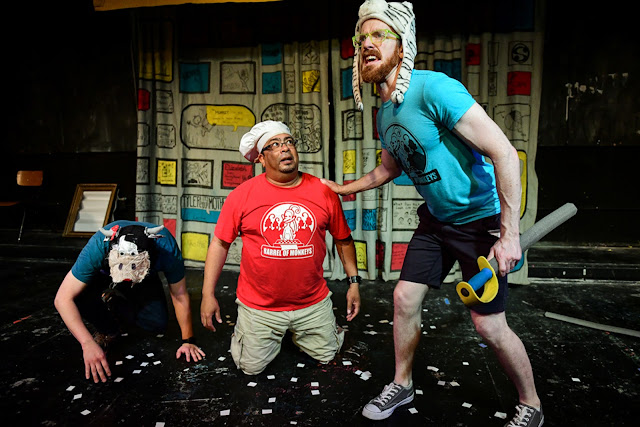 
Now in its eighteenth year, THAT’S WEIRD, GRANDMA features adaptations of stories written during Barrel of Monkeys’ creative writing residencies in Chicago elementary schools. BOM’s ensemble of professional actors, comedians and musicians bring the young authors’ stories to life as raucous sketches, songs and movement pieces, performing first for students in their schools and then for the public. These stories – from hilarious dialogues between unlikely characters to poignant pleas for social change – resonate with adults while celebrating the imaginations of young people. Every week brings a new line-up of stories, and BOM invites audiences to vote on their favorites at each performance.

About the Directors
Brandon Cloyd joined Barrel of Monkeys in 2007 and has been deeply involved in many facets of the company ever since. Prior to joining BOM, Brandon graduated from Northwestern University with a Bachelor of Arts in Theatre and a minor in Business Institutions. Within BOM, Brandon has served as an actor, teaching artist, lead teacher, a member of Teacher Corps, as well as directing shows for schools and public performances of That's Weird, Grandma. Before becoming the company’s Artistic Director in September 2017, Brandon served as BOM After-School Program Coordinator at Loyola Park from 2014-2016 and Program Director from 2016-2017. Outside of Barrel of Monkeys, he worked as the Associate Director of Camp Echo, where he has spent 13 summers managing campers and staff at a co-ed sleep away camp in Upstate New York. Brandon has worked with other theatre companies including Urban Theatre Company, American Theater Company, Filament Theatre, InGen Productions, ACLE's Teatrino in Italy and Purple Crayon Players at Northwestern University. Brandon recently joined the Board of Directors for the League of Chicago Theatres.


Nick Hart graduated from Columbia College Chicago with a BA in theatre in 2010. He has been a proud member of Barrel of Monkeys, a non-profit theatre and education organization serving Chicago Public School students and regularly performs in their show That's Weird Grandma since 2011. He is also an ensemble member with The Neo-Futurists since 2014. He has written and performed over 150 short plays for The Neo-Futurists, and is now regularly writing and performing for their new show The Infinite Wrench.  He is also the creator of The Neo-Futurists Productions of Remember The Alamo and 60 Songs in 60 Minutes. 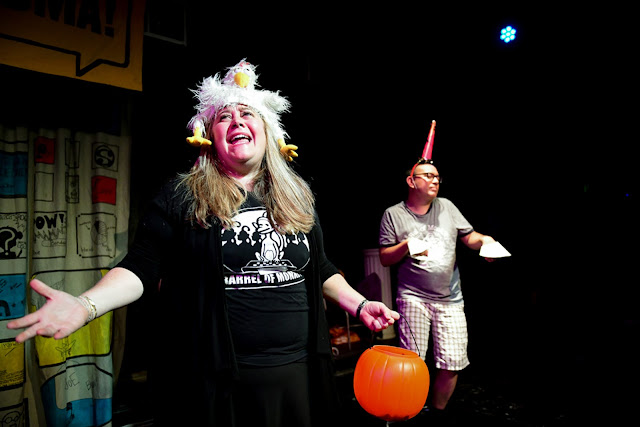 Jennifer Johnson and Tom Malinowski perform “Unicorn aka a Horse” 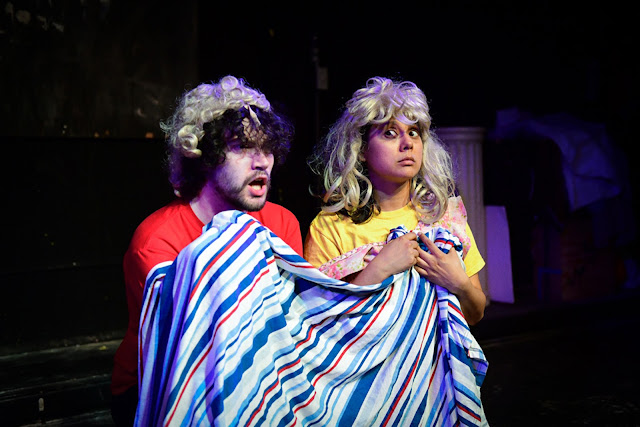 Leo Thorp and Aissa Guerra perform “The Orphan Girl” in Barrel of Monkeys’ new revue THAT’S WEIRD, GRANDMA: Fantastic Beasts and the Stories About Them. Photo by Evan Hanover.
Posted by Bonnie Kenaz-Mara at 3:11 PM