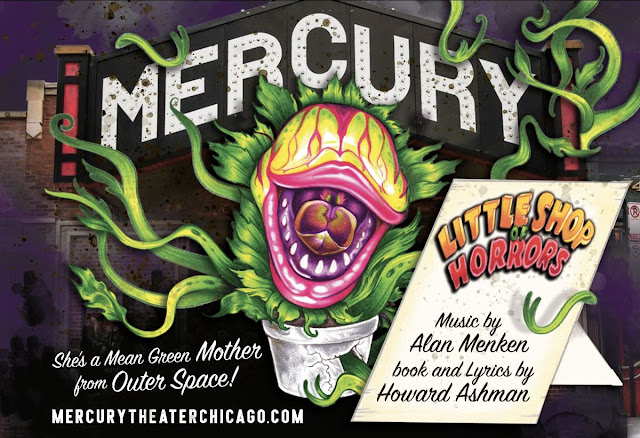 LITTLE SHOP OF HORRORS has long been one of my favorite musicals and I can't wait to see Mercury Theater's unique take on this classic. My son and I are beyond excited to be catching the press opening Sunday, March 10th, so check back soon for my full review. This is a great pick for multigenerational appeal.

Seymour Krelborn is in search of an escape from his poverty-stricken life on an urban skid-row. He discovers a mysterious carnivorous plant, which survives on human blood.  This man-eating plant quickly blossoms into a fully-fledged local attraction and propels Seymour to success. Before long, Seymour discovers the plant’s extra-terrestrial roots and its’ ultimate desire for world domination.


This hit sci-fi musical has devoured the hearts of audiences around the world for more than 30 years, following the story of floral assistant who stumbles across a new breed of carnivorous plant that promises to grant him fame, fortune and all his desires – as long as the blood keeps flowing. LITTLE SHOP OF HORRORS will feature the creative talents of Walter Stearns (Director), Eugene Dizon (Musical Director) and Christopher Carter (Choreographer)

Walter Stearns, Executive Director of Mercury Theater Chicago, announced the cast and creative team of the upcoming LITTLE SHOP OF HORRORS, running on the main stage from March 1 through April 28. 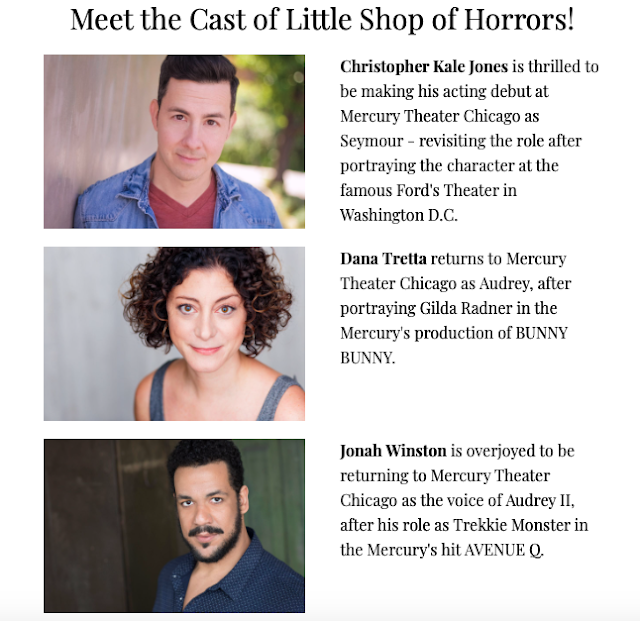 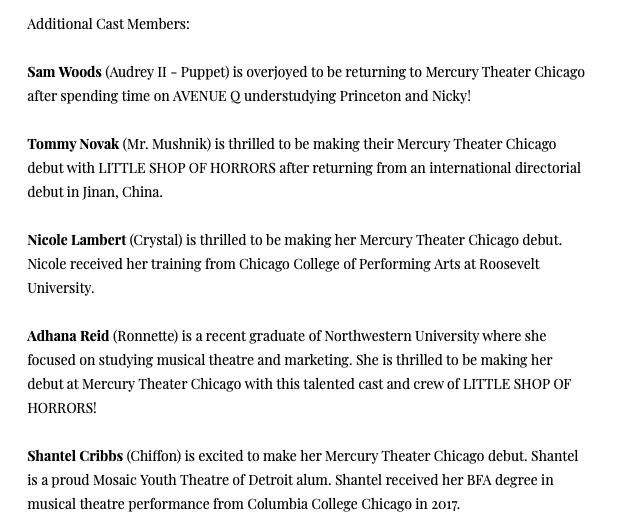 Howard Ashman and Alan Menken (Disney's The Little Mermaid, Beauty and the Beast, and Aladdin) are the creative geniuses behind what has become one of the most popular shows in the world. LITTLE SHOP OF HORRORS is based on a Roger Corman thriller from the 1960’s (which featured a young Jack Nicholson).  As a musical it has delighted and enthralled audiences since it’s opening off-Broadway in 1982. The original production won several awards, including the 1982–1983 New York Drama Critics Circle Award for Best Musical, the Drama Desk Award for Outstanding Musical, and the Outer Critics Circle Award.

LITTLE SHOP OF HORRORS runs from March 1 through April 28. The press opening is Sunday, March 10 at 7:30pm. The performance schedule is Wednesdays at 8pm, Thursdays at 8pm, Fridays at 8pm, Saturdays at 5pm and 8:30pm and Sundays at 3pm. Individual tickets range from $35-$65 and are available online at www.MercuryTheaterChicago.com, over the phone at 773.325.1700, or in person at the Mercury Theater box office at 3745 N. Southport Avenue, Chicago.

About the Cast of LITTLE SHOP OF HORRORS:

CHRISTOPHER KALE JONES* (Seymour) is thrilled to be making his acting debut at Mercury Theater Chicago, revisiting a role he first tackled at famed Ford's Theatre in Washington D.C. Perhaps best known for playing Frankie Valli in the 1st National Tour of Jersey Boys (including a Tonight Show appearance), Chris's other favorite roles include Chris in Miss Saigon (Foothills Theatre), Sebastian in Twelfth Night (Orlando Shakespeare Theatre) and Mercury in Olympus on my Mind (Bristol Riverside Theatre). Chicago-area credits include: Miracle on 34th St. (Theatre at the Center), The Ballad of Little Jo (Steppenwolf), A Midsummer Night's Dream (Chicago Shakespeare Theatre), The King and I and 2018’s Jeff-award winning production of Ragtime (Marriott Theatre). Also, a recording artist, Chris recorded four albums and toured internationally with his former band, PBS sensation “Under the Streetlamp”. Chris is a graduate of Northwestern, a proud member of Actors’ Equity Association, and thankful to be partnered with Gray Talent Group. Love to his wife and original Audrey, actress Jenna Coker-Jones, and of course to his little Audrey II, daughter Presley Rose Jones.  Last year, Chris partnered with Mercury Theater Chicago to record his latest album DARIN: Live at the Mercury, a celebration of the hits of Bobby Darin.

JONAH WINSTON* (Audrey II - Voice) is overjoyed to be returning to The Mercury Theatre Chicago where he was recently seen as Trekkie Monster in the Mercury's smash hit production of Avenue Q! Fresh off of his performance as Little John in The Cleveland Playhouse's production of Ken Ludwig's Sherwood: The Adventures of Robin Hood in Cleveland, Ohio, some of Jonah's favorite Chicago credits include: Mr. Fezziwig in A Christmas Carol (Goodman Theatre), the Maître d' in The Merry Widow (Lyric Opera of Chicago), and Newt Lee/Riley in Parade (Writers Theatre). Jonah has also worked regionally at The Indiana Repertory Theatre, The Green House Theatre, Illinois Shakespeare Festival, Porchlight Music Theatre, American Blues Theatre, and Beef and Boards Dinner Theatre. Television and Voice Over credits include Chicago Fire, Chicago P.D., Senor Wolley, Skittles, Kool Aid, and Nestle. A native of Indianapolis, Indiana, Jonah holds duel bachelor's degrees in Theatre Performance and Vocal Music from the Butler University Jordan College of the Arts, as well as a Master of Letters Degree from the Flinders University Drama Center in Adelaide, South Australia.

SAM WOODS (Audrey II - Puppet) is overjoyed to be returning to Mercury Theater Chicago after spending time with them on Avenue Q understudying Princeton and Nicky! Some of his favorite regional credits include: Ali Hakim in Oklahoma! (Crane River Theatre Co.), Warner in Legally Blonde: The Musical (Paul Bunyan Playhouse), Mercutio in an immersive re-telling of Shakespeare’s Romeo and Juliet, and Jamie Wyeth in Nureyev's Eyes, both with the Bluebarn Theater. When not performing theatre, Sam can be found improvising with his team Hero's Journey or writing his next play or sketch.

TOMMY NOVAK* (Mr. Mushnik) is thrilled to be making their Mercury Theater Chicago debut with Little Shop of Horrors after returning from an international directorial debut in Jinan, China, where they directed a production of Peter Pan, and embarking on a tour of China with a production of Seussical. Select Chicago credits include: Hairspray (Skylight Music Theater), Do Re Mi and Billy Elliot (Porchlight) and Robin Hood at First Stage.

ADHANA REID (Ronnette) is a recent graduate of Northwestern University where she focused on studying musical theatre and marketing. She is thrilled to be making her debut at Mercury Theater Chicago with this talented cast and crew of Little Shop of Horrors. Chicago credits include Fantastic Mr. Fox (Emerald City Theatre); Eclipsed (Pegasus Theatre); Big River (Theatre at the Center); Stick Fly; Sweet Charity (Northwestern University); and Spring Awakening (Marriott Theatre).

About the Creative Team of LITTLE SHOP OF HORRORS:

L. WALTER STEARNS (Director) As Executive Director of Mercury Theater Chicago, Walter is a champion for Chicago artists and productions and has overseen the physical and cultural revival of a beautiful theatre. He has directed over 40 musicals including his Jeff Award-winning productions of The Addams Family and Ragtime as well as the Jeff Award nominated productions of Mary Poppins, The Producers, The Addams Family, Avenue Q, The Color Purple, Barnum-The Circus Musical, The Christmas Schooner, Nine the Musical, Ragtime, Gypsy, The Secret Garden, Sweeney Todd, Company, A New Brain, Into the Woods, Merrily We Roll Along and Falsettos. He was pleased to produce The Man Who Murdered Sherlock Holmes, which was awarded the Jeff Award for New Work. Most recently, he opened the new Venus Cabaret Theater with Stephen Sondheim’s Company and Stephen Schwartz’s Pippin. Walter has received the Jeff Award, BroadwayWorld Award, After Dark Awards, the Larry Sloan Advocate Award (for his support of Season of Concern), the first Guy Adkins award for his contributions to the art of musical theatre and the Franny Award as a distinguished alumnus of the University of Illinois at Chicago.

EUGENE DIZON (Musical Director) is thrilled to be collaborating with this talented cast and crew of Little Shop of Horrors. Eugene has been musical directing for over two decades garnering 6 Jeff Awards (Ragtime, Sweeney Todd, Amadeus, Company, Into the Woods, Merrily We Roll Along), Jeff nominations for A Grand Night for Singing, Candide, Nine the Musical, Closer Than Ever, A Little Night Music, Passion, Colette Collage, Falsettos; 4 After Dark Awards (Ragtime, Sweeney Todd, A New Brain, Merrily We Roll Along), and BroadwayWorld nominations for Company, Hair, Mary Poppins, The Color Purple. Additionally, he has musical directed Pippin, The Producers and Barnum at the Mercury. He is honored to have been inducted into the Chicago Filipino Hall of Fame. Eugene has co-produced 6 “Season of Carols” CD’s (with Cory Goodrich) which features some of the brightest talent in Chicago theater today, for which Season of Concern awarded him the 2013 Larry Sloan Advocate Award and the Season of Concern 2018 Larry Sloan Legacy Award for consistently and passionately being a trailblazer on behalf of Season of Concern.