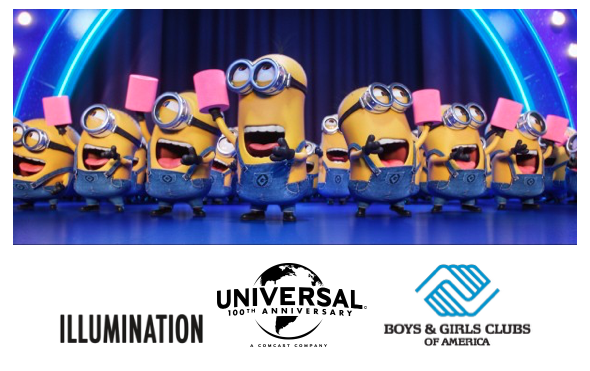 Seasonal Initiative Aligns with the Release of Despicable Me 3 Now on Digital and on Blu-ray™ & DVD on December 5, 2017.

Universal Pictures Home Entertainment (UPHE) and the Boys & Girls Clubs of America are teaming up for a “Merry Minions” Holiday Program,  a joint venture designed to celebrate the season with help from the home entertainment release of Despicable Me 3-- the biggest animated film of the year presented by Illumination and UPHE -- and the iconic Minions.  Despicable Me 3 has grossed over $1 billion at the global box office and is available now on Digital and on Blu-ray™, DVD, On Demand and 4K Ultra HD on December 5, 2017.

During the month of December,  Boys & Girls Club kids will work together to create holiday ornaments or gift items, decorate baked goods,  design artwork inspired by the Minions, hold Minion-themed screening parties, and more. Group activities using the “Merry Minions” holiday kit elements are intended to foster the BGCA’s mission of teaching youths to be productive, caring and cooperative, themes also reflected in Despicable Me 3 and ideal for the holiday season.  Clubs will have the opportunity to turn activities into fundraising events, community service projects, opportunities for volunteer support functions, gift-giving and mentoring/teaching lessons for youths.

Boys & Girls Clubs of America, Illumination, and ​Universal Pictures Home Entertainment are committed to helping America’s youth shape their futures and celebrate the holiday season through the spirit of giving.

About Despicable Me 3
The characters beloved by everyone – Gru, his wife Lucy, their three adorable daughters—Margo, Edith and Agnes—and the Minions are back in this heartwarmingly subversive comedy from Academy Award®-nominated producer Chris Meledandri (Despicable Me Franchise) and directors Pierre Coffin (Despicable Me Franchise) and Kyle Balda (Minions 1 & 2, The Lorax). After he is fired from the Anti-Villain League for failing to take down Balthazar Bratt, the latest evil mastermind to threaten humanity, Gru finds himself in the midst of a major identity crisis. But when a mysterious stranger informs Gru that he has a long-lost twin brother — a brother who desperately wishes to follow in his twin’s despicable footsteps — the former super-villain rediscovers just how good it feels to be bad. Featuring the voice talents of Steve Carell, Kristen Wiig, Miranda Cosgrove, Steve Coogan, Jenny Slate, Dana Gaier and legendary actress Julie Andrews, Despicable Me 3 is the #1 animated film of the year and the latest chapter in the biggest animated franchise in the world.

About BGCA
For more than 150 years, Boys & Girls Clubs of America (https://www.bgca.org/)
has enabled young people most in need to achieve great futures as productive, caring, responsible citizens. Today, 4,300 Clubs serve 4 million young people through Club membership and community outreach. Clubs are located in cities, towns, public housing and on Native American lands throughout the country and on U.S. military installations worldwide. They provide a safe place, caring adult mentors, fun and friendship, and high-impact youth development programs on a daily basis during critical non-school hours. Club programs promote academic success, good character and citizenship, and healthy lifestyles. In a Harris Survey of alumni, 54 percent said the Club saved their lives. National headquarters are located in Atlanta. Learn more at http://bgca.org/facebook and http://bgca.org/twitter.

About Illumination
Illumination, founded by Academy Award® nominee Chris Meledandri in 2007, is one of the entertainment industry’s leading producers of event-animated films.  The company’s franchises include two of the top-six animated films of all time, and its iconic, beloved brands—infused with memorable and distinct characters, global appeal and cultural relevance—have grossed more than $5.7 billion worldwide.
Posted by Bonnie Kenaz-Mara at 8:19 PM