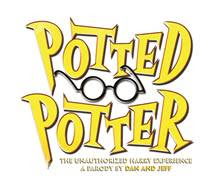 Broadway In Chicago, Starvox Entertainment and Potted Productions are delighted to announce that Potted Potter: The Unauthorized Harry Potter Experience – A Parody by Dan and Jeff will offer a limited number of $25 rush tickets on the day of each show available for students, teachers, seniors (60+) and military for all performances. This offer for rush tickets will be available for purchase with a valid ID at the Broadway Playhouse at Water Tower Place Box Office (175 E. Chestnut) and will be sold on a first-come, first-served basis. Visit the Broadway In Chicago website for box office hours. 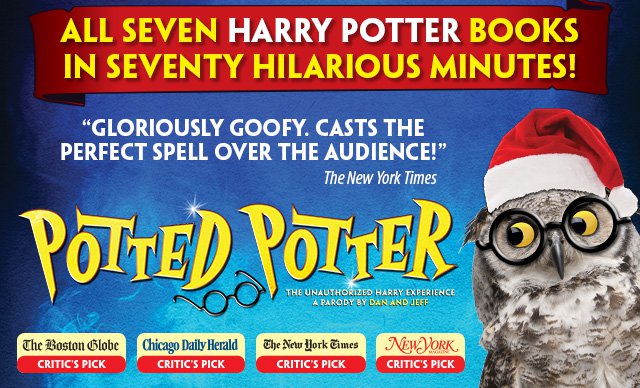 The return of the hit off-Broadway show plays Chicago for a six-week engagement at the Broadway Playhouse at Water Tower Place (175 E. Chestnut), extended due to popular demand with performances added through Jan. 21, 2018. These added performances are now on sale to the public.

Created by former BBC Television hosts Daniel Clarkson and Jefferson Turner, the play takes on the ultimate challenge of condensing, or “potting”, all seven Harry Potter books into 70 madcap minutes, aided only by multiple costume changes, brilliant songs, ridiculous props and a generous helping of Hogwarts magic. The show also invites audiences to engage with a real life game of Quidditch, but according to Clarkson and Turner’s unique set of rules.
Whether you camped outside a bookstore for three days awaiting the release of the Deathly Hallows or you don’t know the difference between a horcrux and a Hufflepuff, the comedy, magic and mayhem of Potted Potter: The Unauthorized Harry Experience – A Parody by Dan and Jeff makes for an entertaining and hilarious visit to the theatre.  The fast-paced show, which has made audiences aged six to Dumbledore (who is very old indeed) roar with laughter all over the world, is perfect for the entire family.


ABOUT BROADWAY IN CHICAGO
Broadway In Chicago was created in July 2000 and over the past 17 years has grown to be one of the largest commercial touring homes in the country.  A Nederlander Presentation, Broadway In Chicago lights up the Chicago Theater District entertaining well up to 1.7 million people annually in five theatres. Broadway In Chicago presents a full range of entertainment, including musicals and plays, on the stages of five of the finest theatres in Chicago’s Loop including the Cadillac Palace Theatre, CIBC Theatre, Oriental Theatre, and just off the Magnificent Mile, the Broadway Playhouse at Water Tower Place and presenting Broadway shows at The Auditorium Theatre of Roosevelt University. For more information, visit www.BroadwayInChicago.com.