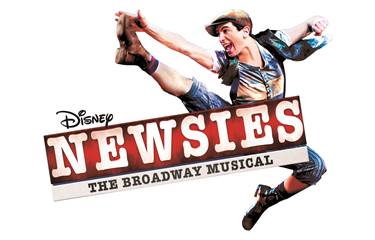 Here at ChiIL Mama & ChiIL Live Shows we adore NEWSIES! It was our great pleasure to review the Broadway touring production, and now we're eager to see Marriott Theatre's take on this Tony Award-winning musical. This is a great pick for multigenerational appeal and family friendly memory making. It's also a great clutter busting gift idea just in time for the holidays.

My teen loved it and later sang one of the show's hits in his high school's winter choir concert. We'll be out for opening night so check back soon for our full review.

To make a restaurant reservation, please call 847.634.0100. Free parking is available at all performances. To reserve tickets, please call The Marriott Theatre Box Office at 847.634.0200 or go to www.ticketmaster.com. Visit www.MarriottTheatre.com for more information.
Posted by Bonnie Kenaz-Mara at 3:39 PM