OPENING: How We Got On Kicks Off Haven's Season As First Show In The Den’s New Bookspan Theatre

HAVEN THEATRE COMPANY PRESENTS THE CHICAGO PREMIERE
HOW WE GOT ON
WRITTEN BY IDRIS GOODWIN AND DIRECTED BY JESS MCLEOD, AT THE DEN THEATRE, SEPTEMBER 29 – NOVEMBER 12 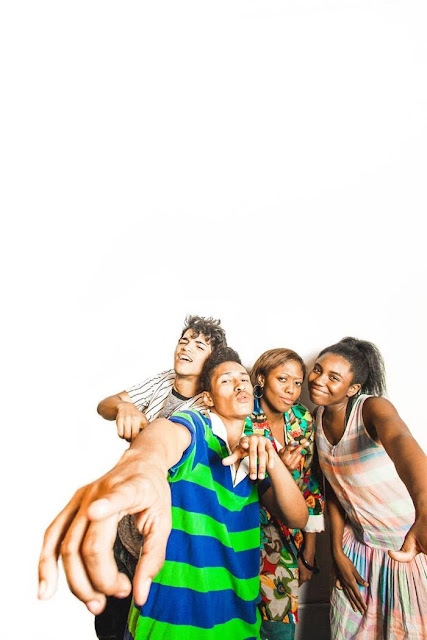 ChiIL Mama will be there for the press opening this Sunday, so check back soon for our full review. We're excited to see The Den Theatre's new space and check out Haven Theatre Company's latest production. Idris Goodwin's How We Got On will begin their fourth season, directed by Jess McLeod, at the company’s new home within the Den Theatre’s new Bookspan Theatre, 1335 Milwaukee Ave., September 29 – November 12.

Previews are Thursday, Sept. 29 – Saturday, Oct.1 at 8 p.m. Opening night is Sunday, Oct. 2 at 7 p.m. The regular performance schedule is Thursdays – Saturdays at 8 p.m. and Sundays at 3 p.m. Regular run tickets are $32, senior tickets are $20 and college/industry tickets are $15 (preview tickets are $12). You may purchase tickets and get more information at www.haventheatrechicago.com.

NOTE: In partnership with Young Chicago Authors, Haven Theatre is pledging six free tickets to high school students for each performance. At showtime, the offer will extend: all unsold seats will go to high school students, free of charge. Students must present a High School Student ID or an alternative proof of enrollment to the box office to redeem. Haven is committed to offering a sanctuary for budding artists and the Chicago community, providing greater access to art for young audiences.  With the support of YCA, How We Got On will be a step in that effort.

In this remixed coming-of-age story, an all-knowing DJ loops the audience through the tracks of three Midwestern teen rappers stranded in suburbia. Determined to find their artistic voices; Hank, Julian and Luann are forced to combat the discord of crude technology, family dysfunction and ruthless rivalries as this B-side of 1980’s hip-hop history is spun. Plug in an open mind for the Chicago premiere of a throwback mix tape that goes to prove: we’re all just a work-in-progress.

It is with great pride Haven Theatre Company gets to produce this work, as well as future productions, in the Den Theatre’s new Bookspan Theatre as the resident company. Haven Theatre Company’s Founder and Executive Director Carol Cohen said, “We have always wanted a space to call our own, but the cost, not to mention the responsibilities and logistics that entails, was just too much.” She continued, “When The Den Theatre’s Artistic Director Ryan Martin suggested that Haven come on as a resident company, it was a dream come true. And then, we were offered the opportunity to name this new space, we could not have been happier.”

The Bookspan Theatre is named after Janet Bookspan, a respected arts educator, performance coach, director, performer. Haven Theatre Company’s Artistic Director Josh Sobel stated “"When Carol asked me about suggestions for a name of Haven Theatre’s new home at the Den, the thought process took, without exaggeration, about three seconds,” commented Sobel. “Janet was an influential force in the performing arts, with a life and career embodied by thinking outside the box and nurturing others to reach their full potential. Bestowing the new space with her name is also a significant moment for me personally, as Janet was my aunt as well as one of my biggest artistic influences. As Haven launches this season with a commitment to nurturing the theatrical voices of the future, how fitting it feels to have Janet’s name endowing this new venue and with it her spirit, her memory and her legacy.”

ABOUT PLAYWRIGHT IDRIS GOODWIN
Idris Goodwin is a playwright, rapper and essayist. His plays include How We Got On, Remix 38 (Actors Theater of Louisville), And In This Corner: Cassius Clay (StageOne Family Theater), This Is Modern Art (Steppenwolf), Blackademics (MPAACT, Crowded Fire), Bars and Measures (B Street Theatre, NNPN RWP) and The Raid (Jackalope Theatre). Goodwin is one of the six playwrights featured in Hands Up, an anthology commissioned by The New Black Fest. Hands Up has been presented across the country. His latest play The Realness is having its world premiere at Merrimack Repertory Theatre. He is the recipient of Oregon Shakespeare’s American History Cycle Commission and InterAct Theater’s 20/20 Award. Goodwin has been a writer in residence at The Eugene O’Neil Playwrights Center, Berkeley Rep’s Ground Floor Program, The Lark Playwriting Center and New Harmony Project. An accomplished Hip Hop poet, his albums include Break Beat Poems and Rhyming While Black. Goodwin was featured on HBO, Sesame Street and Discovery Channel. He is the author of the pushcart nominated essay collection These Are The Breaks (Write Bloody, 2011). Goodwin is the co-host and contributor to Critical Karaoke, a radio show and podcast about music and culture. He also teaches performance writing and Hip Hop aesthetics at Colorado College.

Haven Theatre Company announces How We Got On to begin their fourth season, written by Idris Goodwin and directed by Jess McLeod, at the company’s new home within the Den Theatre’s new Bookspan Theatre, 1335 Milwaukee Ave., September 29 – November 12. Previews are Thursday, Sept. 29 – Saturday, Oct.1 at 8 p.m. Opening night is Sunday, Oct. 2 at 7 p.m. The regular performance schedule is Thursdays – Saturdays at 8 p.m. and Sundays at 3 p.m. Regular run tickets are $32, senior tickets are $20 and college/industry tickets are $15 (preview tickets are $12). You may purchase tickets and get more information at www.haventheatrechicago.com.
Posted by Bonnie Kenaz-Mara at 5:34 PM