OPENING: The Man Who Murdered Sherlock Holmes” at Mercury Theater 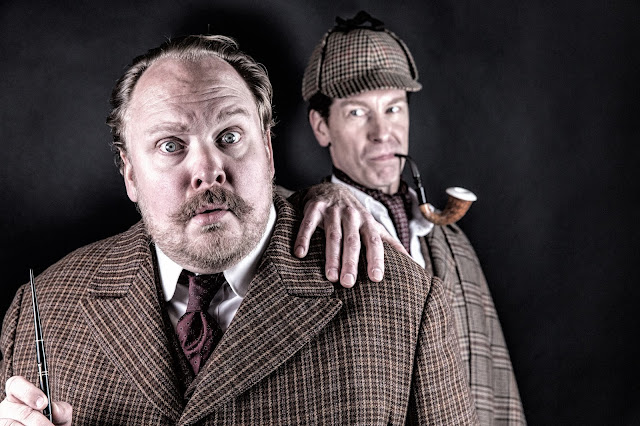 ChiIL Mama will be there for the press opening tonight. Check back soon for our full review here and on our sister site, ChiIL Live Shows. There's been a whole lot of Sherlock in the microcosm of Chicago's theatre scene lately. We can't wait to catch Mercury Theater's stab at the iconic figure and his mysterious potential.

Sherlock Holmes confronts his creator and his killer in this new musical by John Reeger, Julie Shannon and Michael Mahler.  The production is directed by Warner Crocker who will lead a cast of award-winning actors including Nick Sandys and Michael Lindner to bring this tale to life.

Inspired by actual events, with a little fantasy thrown in, “The Man Who Murdered Sherlock Holmes” begins with Sir Arthur Conan Doyle writing "The Final Problem," in which his famous detective is killed off.  When it is revealed that the beloved character of Sherlock Holmes has been done in, everyone from Churchill to Doyle's own family is up-in-arms. Besieged by telephone calls and angry mobs outside his home, Doyle flees London to escape the harassment. Surprisingly, he finds a much more challenging problem awaiting him when out of the evening mist steps Sherlock Holmes. And so begins a battle of wits between the author -- who wants his character dead -- and character -- who demands to be revived to preserve his legacy. Next thing you know, the writer and his creation are off together solving the real-life crime of “The Wyrley Ripper”.

The development of “The Man Who Murdered Sherlock Holmes” began twenty years ago, when actor/writer John Reeger came across a book by Peter Costello in the local library called “The Real World of Sherlock Holmes” which chronicled the investigation of actual criminal cases by Holmes’ creator Sir Arthur Conan Doyle. Reeger realized the dramatic possibilities of this concept and shared his partially completed script with composer and lyricist Julie Shannon.  By spring of 2005, John had completed the first draft and in June 2006, Julie felt ready to record the score. With the generous help of many talented actors and singers Julie and her husband/sound engineer Bill Geller held recording sessions before hosting the first reading of the show at Julie and Bill’s home. Unfortunately, Julie became too ill to continue working after that. After a long and brave struggle, she passed away in 2012. The musical “sat in the drawer” until spring of 2014 when Walter Stearns at the Mercury Theater Chicago organized a third reading of the show. Realizing the musical’s potential, he offered to produce the show at the Mercury. Michael Mahler, composer and lyricist of Hero and October Sky was enlisted as the show’s new collaborator. Much of Julie’s original score remains with exciting new music and lyrics from Michael.

“The Man Who Murdered Sherlock Holmes” is written by John Reeger with music and lyrics by Julie Shannon and Michael Mahler and will be brought to life by an award-winning cast including Nick Sandys as “Sherlock Holmes” and Michael Lindner as “Arthur Conan Doyle”. Rounding out the cast for this adventurous tale will be McKinley Carter, Mary Ernster, Johann George, David Girolmo, Jason Grimm, Christina Hall, Ron Keaton, Matthew Keffer, Russell Mernaugh, James Sparling, and Colette Todd. The scenic design is by Scott Davis, with costume design by Bob Kuhn, lighting design Yael Lubetsky and sound design by Mike Ross and Joe Court.

Director Warner Crocker has been working on the development of new musicals, as well as authoring new works, for over 20 years and returns to Chicago after leading a regional theater for the past 15 years. The team of John Reeger (book) and Julie Shannon (music and lyrics) worked together on numerous projects including Mercury Theater Chicago’s annual holiday musical The Christmas Schooner, Stones (starring Felicia P. Fields), and Let the Eagle Fly: The Story of Cesar Chavez. Michael Mahler, composer and lyricist, is praised for his work on Marriott Theatre’s October Sky, and Hero (Jeff Award – Best New Work: Musical), Wonderland: Alice’s Rock & Roll Adventure, The 9/11 Report, How Can You Run with a Shell on Your Back?, Knute Rockne: All-American, The Christmas Miracle of Jonathan Toomey and others. He contributed additional lyrics to Cameron Mackintosh’s West End revival of Miss Saigon which has set its sights on a Broadway return in spring 2017. His songs have been featured in various songwriter showcases around the world, including the National Alliance for Musical Theatre New Works Summit, the MAC/ASCAP Songwriter Showcase, and an evening at the Kennedy Center.

The beautifully renovated Mercury Theater Chicago is an intimate jewel box of a theater in the heart of the Southport Corridor, a sophisticated neighborhood of restaurants and boutiques just steps from Wrigley Field. A delightful theater destination, Mercury Theater Chicago takes care of its guests from the moment they arrive with valet service and dining at its adjoining restaurant, Deleece. Under the leadership of Executive Director L. Walter Stearns, Mercury Theater Chicago will follow “The Man Who Murdered Sherlock Holmes” with a revival of the madcap musical by Mel Brooks, “The Producers.”

Posted by Bonnie Kenaz-Mara at 3:31 PM