Alfred Hitchcock’s 39 Steps at Theatre at the Center Fun For Tweens, Teens and Adults

The 39 Steps is recommended for adults
and children 11 years old and up.

A hit on Broadway and in London’s West End, the thrilling comedy, Alfred Hitchcock’s “The 39 Steps” kick starts Theatre at the Center’s 26th season beginning February 18 and continuing through March 20, 2016.  This comedic spoof offers non-stop action and features four actors playing more than 150 different characters.  The show is filled with an incredible series of lightning fast costume changes that make for a great deal of laughter and excitement. 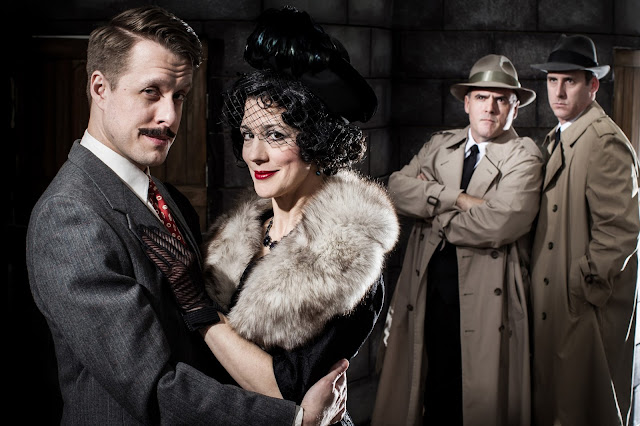 © Theatre at the Center, photo by Guy Rhodes
Pictured are Matt Mueller portraying Richard Hannay,  Linda Gillum as Annabella, Norm Boucher and Kevin McKillip as the mysterious men in Alfred Hitchcock's "The 39 Steps" which opens at Theatre at the Center in Munster on February 18.

Adapted from the 1935 Alfred Hitchcock film and the 1915 novel by John Buchan, the story follows Englishman Richard Hannay, who inadvertently embarks on a chaotic adventure full of narrow escapes and mishaps after trying to help a female spy. When he wakes up to find her dead in his apartment, he flees from the police and an espionage organization, desperately trying to find the truth. 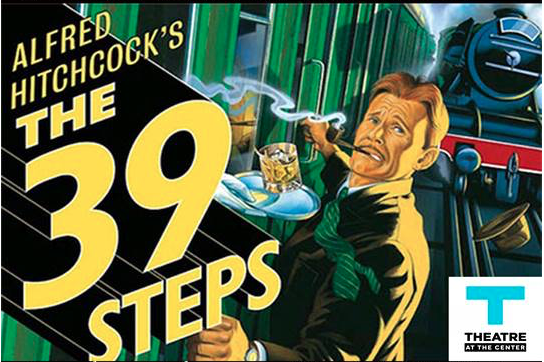 Linda Fortunato has been nominated for five Joseph Jefferson Awards for her work as a choreographer and director. She received both the Equity and Non-Equity Jeff Award for Outstanding Choreography in the 2013-2014 season, garnering Theatre at the Center their first award for her Choreography of 42nd Street.  In addition to her award-winning work on 42nd Street, Fortunato has been involved with over a dozen shows at Theatre at the Center, including choreographing Spamalot, Big Fish, A Christmas Carol, Guys and Dolls, Crazy for You, Fiddler on the Roof; performing in Lend Me a Tenor, The Diary of Anne Frank, and directing A Christmas Story. Fortunato settled in Chicago directly after college and now lives in Evanston with her husband, actor Sean Fortunato, and their seven year old son.

Performances are 2 p.m. Wednesdays and Thursdays; 7:30 p.m. Fridays and Saturdays; 2:30 p.m. Sundays; and select Thursday and Sunday evenings and Saturday matinees. Individual ticket prices range from $40 - $44. To purchase individual tickets call the Box Office at 219-836-3255 or Tickets.com at 800-511-1552. Group discounts are available for groups of 11 or more and gift certificates are also available. For more information on Theatre at the Center, visit www.TheatreAtTheCenter.com

Posted by Bonnie Kenaz-Mara at 8:56 AM

Email ThisBlogThis!Share to TwitterShare to FacebookShare to Pinterest
Labels: Alfred Hitchcock’s 39 Steps, opening, Shows on our radar, Theatre, Theatre at the Center