It was our great pleasure to meet "the caped crusader" at our favorite theme park during Media Day at Six Flags Great America last week. 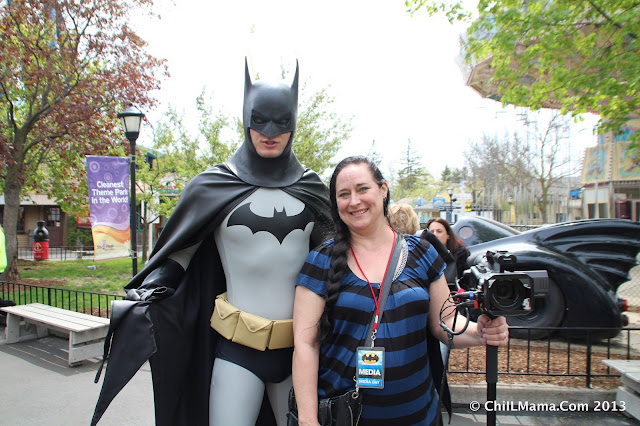 I dig a man who can pull off spandex!  And he had gorgeous grey blue eyes, too... and a sweet ride. 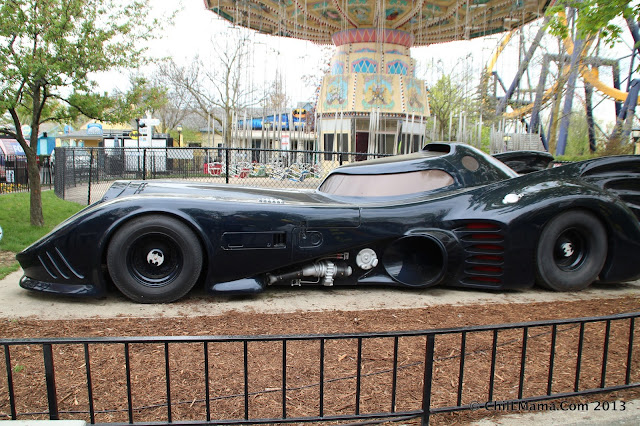 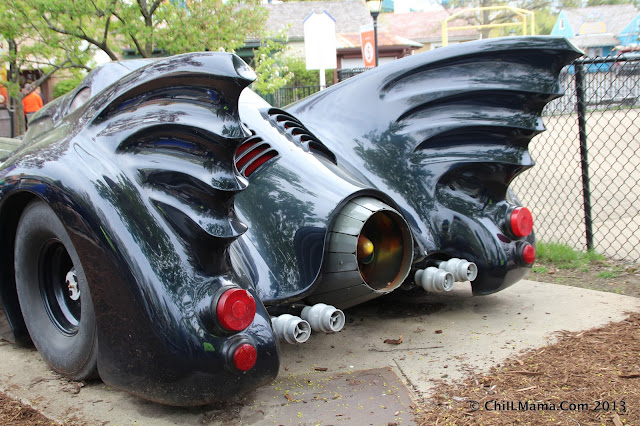 We also interviewed quite a few huge coaster fanatics who were there for the ribbon cutting and multiple rides.   We even caught up with 10 year old Draven who has been on coasters all over the country with his dad. 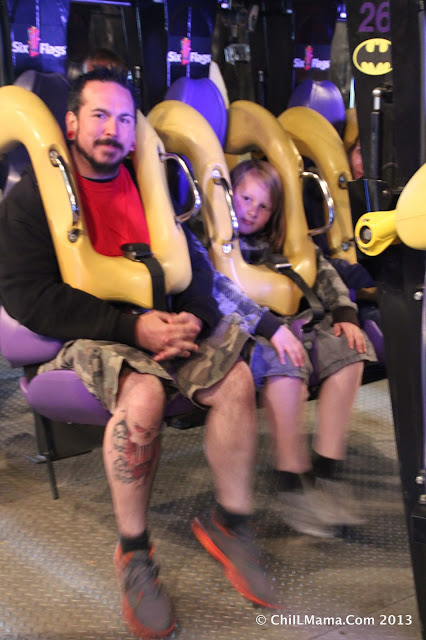 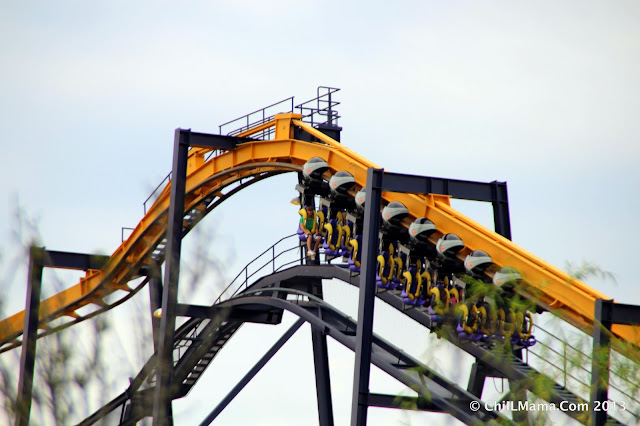 Check back with ChiIL Mama & ChiIL Live Shows for our Batman Backwards ride footage, video interviews and more in the very near future. 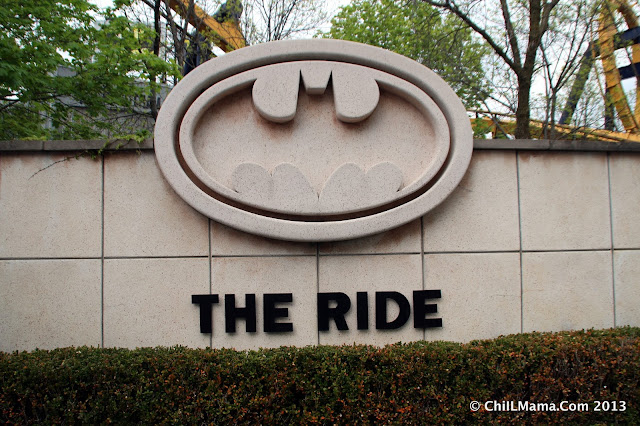 Today we have stills from the day for you.   It was a pleasure to see Theresa from the Local Tourist with her entourage. 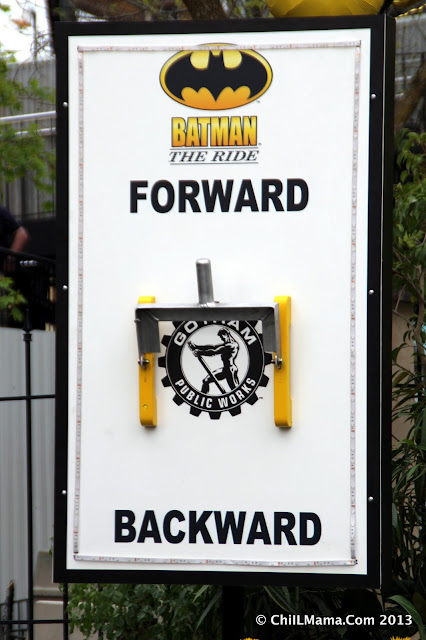 The highlight of the day was riding the coaster in the press seat, where we were filmed DURING THE RIDE!   We even wore mic packs so you can hear the screams.

Click here to check out our original video interviews and footage from the X Flight Coaster grand opening last season.

I grew up near Kings Island in Ohio, coaster capital of the midwest for much of the 80's, and I've been on The Beast (the largest-fastest coaster when it was built), The Bat (a hanging coaster they took out for safety reasons), a looping coaster that goes forward & backward, and The Racer (their old wooden classic with red & blue racing coaster tracks--one forward/ one backward.   At some point during my teen years I was talked onto all of them at least once, by friends and boyfriends, so I'm no stranger to riding backwards and looping at high speeds.

In spite of all that I'm really not a coaster person and even ski lifts freak me out a little.   The whole drive out to press day at Great America I tried to advance justify wussing out on the Batman Coaster (where you hang from the track and do flips, a G force turn and a 10 story drop)... backwards.   I made excuse after excuse saying I'm too old, coasters make my muscles sore, I don't have to prove anything to anyone.... 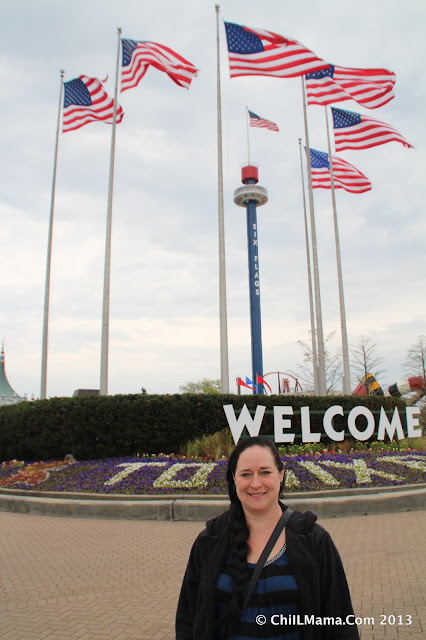 I almost wimped out a bunch of times on the way there, but when it came to crunch time, I DID IT and got video footage to prove it! 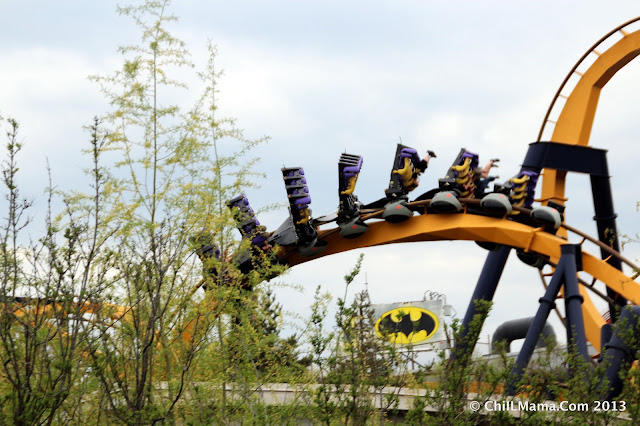 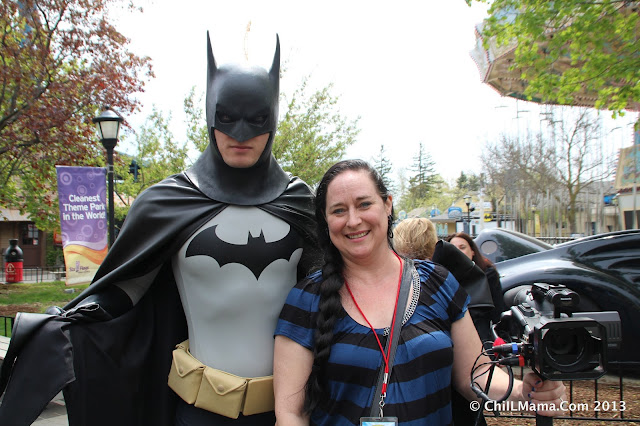 Even the coaster fanatics declared the Batman coaster extra intense backwards.   It's rare as moms and/or mature adults, that we get to do something physical that scares us, and I felt an actual sense of accomplishment when I braved up and went for it.

Honestly, it was more like flying than falling and the view was spectacular!   I'm glad I went and would do it again... though I was dizzy enough when I got off that I had to wait a few minutes before I could grab my camera and shoot straight.   Batman Backwards is some heroic fun. 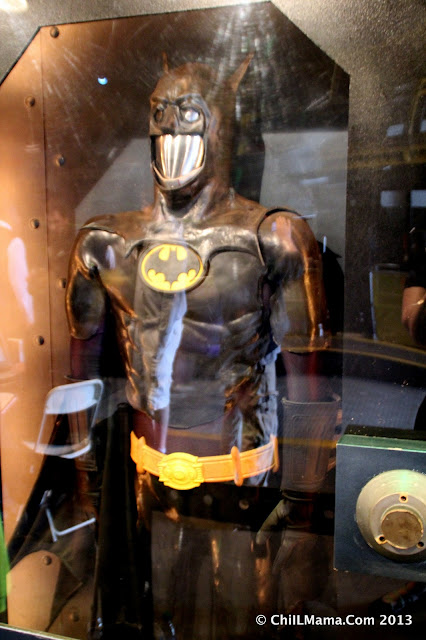 
Go Big. Go Backwards! For a limited time only, the world’s first suspended looping coaster, BATMAN: The Ride, will be more intense than ever when riders dare to take on an all new experience – going backwards! 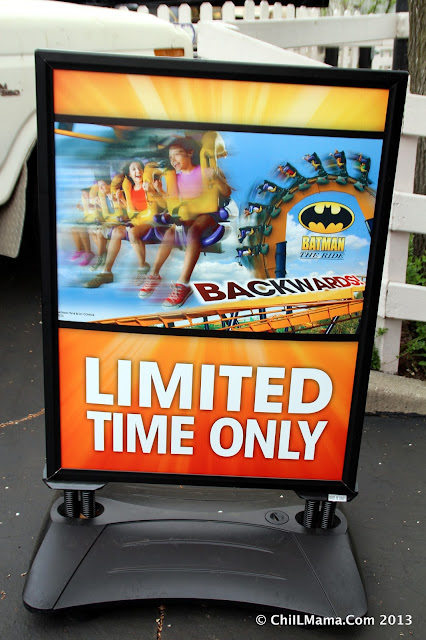 As the roller coaster climbs the 10-story lift hill, riders will take in the full scope of BATMAN: The Ride’s track as they anticipate the adventure that lies ahead. The train will reach speeds of 50 mph and travel through 2,700 feet of track, all while maneuvering hairpin turns, vertical loops, corkscrews and a zero-g roll. The excitement is magnified since guests cannot see the maneuvers that await. 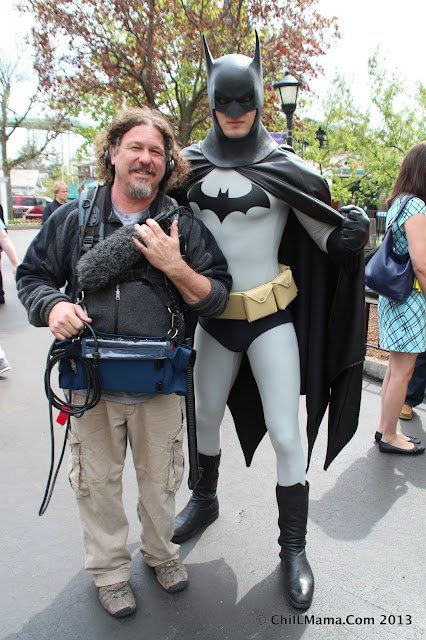 “BATMAN: The Ride will open for its 21st season this spring, offering our guests an entirely different ride experience by going backwards. No matter how many times you have been on BATMAN: The Ride, nothing compares to the thrill of racing down 10 stories facing the other direction,” said Hank Salemi, Six Flags Great America park president. “You literally have no idea what is coming next. This is a tremendous new experience for our guests and one to take advantage of quickly since it will only be available for a limited time.” 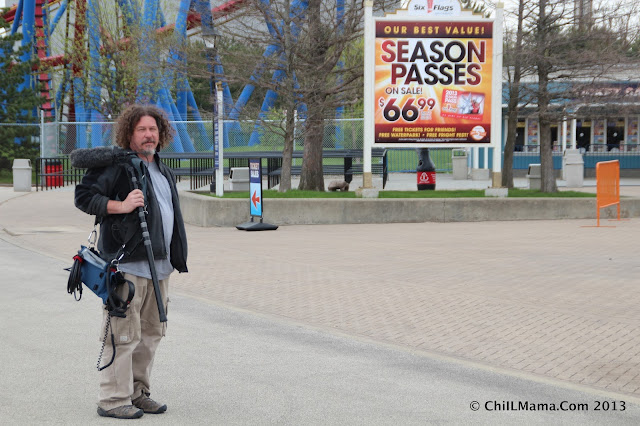 Since opening in 1992,  BATMAN: The Ride has given more than 28 million thrilling rides and reigns as one of the most popular roller coasters in the world. BATMAN: The Ride backwards launched on Saturday, May 4 – the park’s opening weekend – and will be available for a limited time this summer. 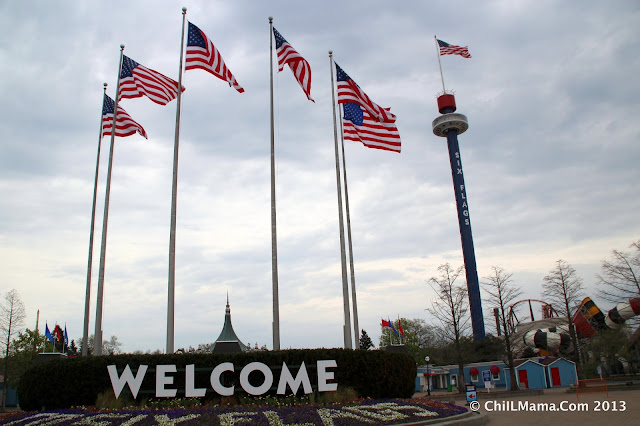 About Six Flags Entertainment Corporation Six Flags Entertainment Corporation is the world’s largest regional theme park company with over $1 billion in revenue and 18 parks across the United States, Mexico and Canada. For more than 50 years, Six Flags has entertained millions of families with world-class coasters, themed rides, thrilling water parks and unique attractions including up-close animal encounters, Fright Fest® and Holiday in the Park®.  For more information, visit sixflags.com.

DC Entertainment, home to iconic brands DC Comics (Superman, Batman, Green Lantern, Wonder Woman, The Flash), Vertigo (Sandman, Fables) and MAD, is the creative division charged with strategically integrating its content across Warner Bros. Entertainment and Time Warner.  DC Entertainment works in concert with many key Warner Bros. divisions to unleash its stories and characters across all media, including but not limited to film, television, consumer products, home entertainment and interactive games. Publishing thousands of comic books, graphic novels and magazines each year, DC Entertainment is the largest English-language publisher of comics in the world.  In January 2012, DC Entertainment, in collaboration with Warner Bros. and Time Warner divisions, launched We Can Be Heroes―a giving campaign featuring the iconic Justice League super heroes―to raise awareness and funds to fight the hunger crisis in the Horn of Africa.
BATMAN and all related characters and elements are trademarks of and © DC Comics.
(s13) 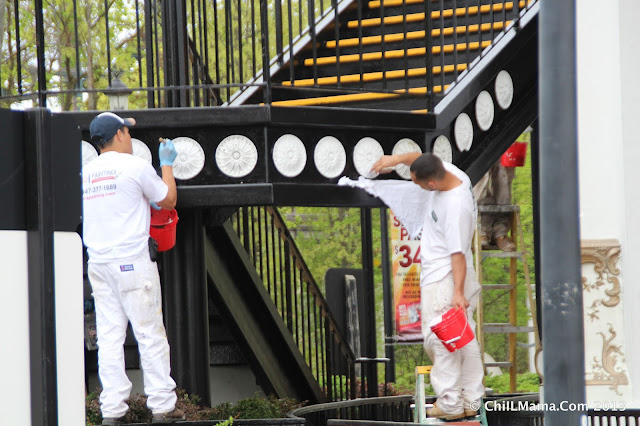 They're busy getting the park summer ready! 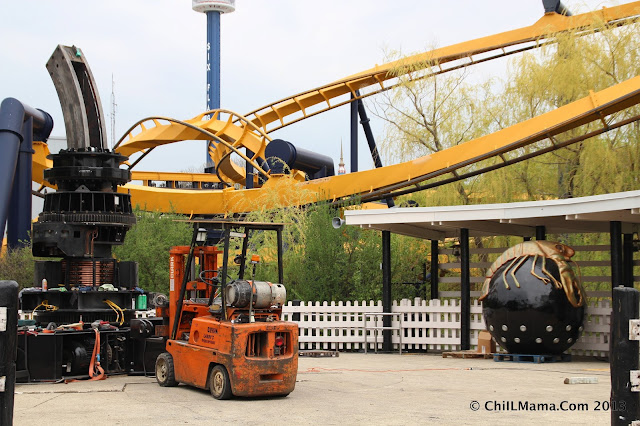 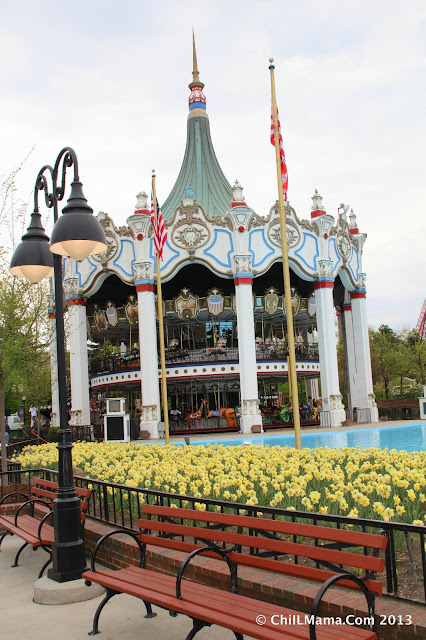 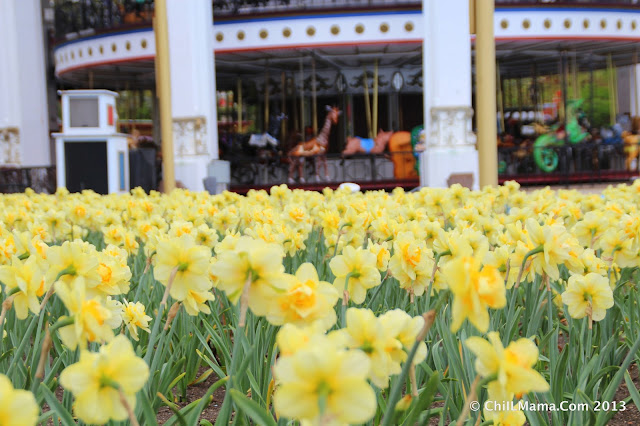